Ghosts, spells and invisible architecture; ducks, David Lynch and the smell of Mars 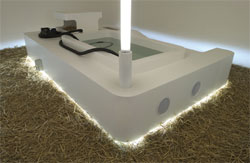 ‘Silence Goes More Quickly When Played Backwards’, Loris Gréaud’s 2005 exhibition at Le Plateau, Paris, was heralded, like some bravura act of stage-managed daredevilry, with a drum-roll. Surprised visitors to the private view were treated to a three-hour solo set by the drummer Gael Angelis, whose acoustic kit was wired up to a series of lamps cum sculptures that provided the space’s sole sources of light. Fractured beats were transformed into flickering stars; son became lumière, a process of kinetic-to-thermal energy transfer that made a number of other, yet-to-be-activated elements of the show partially visible. (The surplus electricity generated by Angelis’ drumming was stored in batteries, which were used to power the show in the days to come.) We might imagine this action as a genesis of sorts, or a rock ‘n’ roll reversal of T.S. Eliot’s lines from The Hollow Men (1925) ‘This is the way the world ends / Not with a bang …’. Like much of Gréaud’s work, it noisily inaugurated a fresh universe, a fresh set of fractal possibilities.

Gréaud’s is an art in which images, objects and ideas live out a kind of radioactive half-life, and the notion of an end-point is held in perpetual abeyance. Characterized by a collaborative bent – he has worked with architects, graphic designers, musicians, writers and engineers – his practice is guided by his belief that, ‘a good piece creates a displacement, a kind of teleportation’. His works, then, are not things-in-themselves but rather machines or programmes or even spells for effecting change. (We might even go so far as to say that change is where his work lives, that change is what it is.) Take the pieces in the powered-up, post-opening version of ‘Silence… ’ – a constellation of neighbouring systems that bathe in each other’s pulsing, interstellar light.

An off-site project that was part of Gréaud’s exhibition at Le Plateau, Les Residents (1) (2005), took place in an apartment in one of the oldest buildings in Paris’ Ile de la Cité. Having put about the rumour that it was haunted via a local radio broadcast, the artist enlisted a team of architects to reconfigure the space according to the principles of what might best be described as a kind of negative feng shui, producing unease, insomnia and fevered dreams in any visitor who agreed to be voluntarily imprisoned there for the night. Back at Le Plateau, the apartment was replicated on a scale of 1:1 using nothing but cold blasts of air, creating an invisible architecture that, with its permeable walls, transformed anyone inhabiting it into a ghost. Such playful looping between the tangible and the intangible – between body, mind and (cultural) memory – is also present in Spirit (2005), another work that featured in ‘Silence …’. For this piece Gréaud worked with a perfumer to replicate the odour of the Red Planet as described in data gathered by the Martian probe Spirit and in passages from numerous sci-fi novels. The result is a glutinous condensation of longing, whether that longing is triggered by the act of launching a billion-dollar spacecraft or of writing a sentence on a cheap typewriter. Wafting across the gallery space, this strange smell might have baffled the notional inhabitants of Eye of the Duck (2005), an architectural unit designed as a dwelling place for mallards. When it was first shown at the Centre Municipal d’Art Contemporain, Gennevilliers, the piece – which resembles the bath tub of a paraplegic crew member of the Starship Enterprise – housed a live duck and emitted a text delivered by film director David Lynch, who compared the creature’s opalescent iris to the perfect film moment: ‘When you’re working on a film […] this eye of the duck is a certain scene, this jewel, that if it’s there, it’s absolutely beautiful. It’s just fantastic.’ At Le Plateau both the duck and Lynch were long gone, and the piece instead broadcast ‘pink noise’ (an almost perpetual hum designed to dampen the gallery’s acoustics) and, once a day at midnight, the same radio programme that was first responsible for embedding the fiction of the artist’s ‘haunted house’ in the Parisian consciousness. Outside the witching hour, to tweak Hamlet’s final words (alive with phantoms and false endings), ‘the rest was silence’.

If Gréaud’s art is about change it is because he realizes that this un-freighted notion frees us from linear time-codes, allowing us to teleport hither and thither, forwards, sideways and back. There is no clock in his work and no censorious ticking, just jewelled moments and the beat of a different drum.