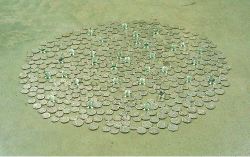 I remember one blustery November morning, walking somewhere near Third and A in the East Village with Tony Feher, lost in conversation, when suddenly he stopped mid-sentence and dashed across the street.

Returning a second later, he held his hands in a way that made me think he had captured a butterfly or small bird. But when he opened them, it was only a bright yellow bottle cap resting on his palm. 'Now that's a gem', he said, polishing the plastic cap on his sleeve like a beggar in a Brecht play might polish a coin. His eyes misted over in an inexplicable reverie and our conversation was utterly forgotten.

In an era characterised by a feverish interrogation of 'the real', and a concomitant manifestation of an obsessive commodity-and-trash aesthetic, it might be tempting to consider Feher's art as ephemeral were it not for its obstinacy, implacability, and longevity. Preceding current dime-store-cultists such as Sarah Sze and Jason Rhoades by a generation, in the early 1990s Feher was associated with the short-lived 'scatter art' movement. Yet his work has never been about materialism or the abject. Closer in sensibility to André Breton's 'Poem-Objects' than, say, Paul McCarthy's ketchup-encrusted props, Feher's work is scatter art without the scat. Even at its loosest and funkiest, it exhibits a noteworthy restraint - the by-product of an exacting and rigorous process of distillation that endows even the most mundane drawing-pin with a palpable charge.

Bottle caps and bottles, discarded polystyrene packaging and plastic tubing, cigarette boxes and coins, crisp packets and milk crates, marbles, plastic flowers, paper cups, refrigerator magnets, gaskets, straws, light-bulbs, bits of clothesline, ribbon, and wire are all collected and categorised, arranged, and obsessed over. It is a passion, not a neurosis, a conscious attempt to rub elbows with the real, to locate it in the realm of the abandoned (all the taken-for-granted things we lose or throw away). Feher makes us a gift of our own debris. It's a gift that comes at a price, however: an exhortation to observe ever more closely the things at hand. For, silly as it sounds, every bottle cap has a story to tell, and, like a psychic with a personal object, Feher unlocks the secret histories of these tiny things.

Befitting Freud's definition of the uncanny, the elements of a Feher sculpture are familiar but estranged objects that emerge unexpectedly into the light. Neither symbols nor referents, they are the real thing, which, despite their apparent lightness and levity, have a melancholy air. If Feher's work speaks of desire, then it is most definitely of a possible desire. His art has the poignant quality of a missed encounter, bringing to mind Baudelaire's poem 'To a Passerby', in which he glimpses the possibility of desire fulfilled in the eyes of a passing woman: 'A flash... then night! - O lovely fugitive, I am suddenly reborn from your swift glance.' 1

If the post-Modernist end-game was to abolish absolute meaning in favour of numerous, possible meanings, Feher positions himself at its crossroads. Eschewing the easily-spun web of juxtapositions and smug irony that characterises most appropriation art, Feher seeks to build a language outside the symbolic order - one that favours listening over speaking. Take Feher's garden, for instance. A splintery flower-box on the fire-escape of his seventh floor walk-up, it embodies all his main concerns: the reclamation of 'low' or lost things, a preference for the ready-made, and a wilful expansiveness. Feher's garden is a riot of weeds. Clover, crab-grass, thistle - all manner of nasty, spindly-looking plants populate this little patch of earth, flowers of evil that transpose tenacity for beauty. For Feher, however, the decision to cultivate weeds was simple. The foul air, poor soil, and his own forgetfulness about watering, made growing flowers impossible, so he collected earth from nearby lots and traffic islands, stuck it outside his window, and whatever appeared was allowed to thrive.

If his flower-box is a container which has been given over to something wild, in Feher's sculpture something wild has seemingly been contained. Formal properties such as repetition, symmetry, balance, bold colours, and classic geometric forms are employed to treacherous ends. They are a mask of benign familiarity, an aesthetic strategy aimed at getting us to lower our guard. Simple and elegant, the grid into which one hundred small glass jars are arranged in Glass Square (1997), for example, becomes a stage upon which a disappearing act is performed. Vacant and seemingly innocuous, Glass Square exists at the threshold of both invisibility and insignificance. The transparency and emptiness of the jars seems to confirm a greater emptiness at the heart of the piece. Surely, its undeniable indolence surpasses even the laziest of slacker art? Yet this is also the point: ridding his work of any aspects of craft or even effort - to the extent that the use of glue or tape is strictly forbidden - Feher's purposeful passivity is, in reality, a brave acquiescence to the power of the ready-made.

Thus, courting dismissal, the work nevertheless sticks with you in a strangely disconcerting way. The more you ponder it, the more opaque its initial transparency becomes. Beneath a facile exterior, Feher's is an art which mines an ontological space between perception and consciousness. Its sly foregrounding of the real is accomplished via a stratagem of fluidity and emptiness; fragility and fatuousness. Indeed, almost all of Feher's works orientate themselves in this way: as a momentary integration of disparate elements resigned to their own inevitable falling apart. Like Buster Keaton, their prat-falls are both poignant and hilarious.