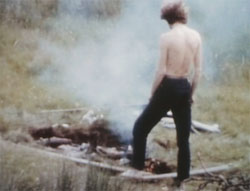 There is a moment in Luke Fowler’s new film, Pilgrimage from Scattered Points (2006), in which a former member of English composer Cornelius Cardew’s experimental musical collective the Scratch Orchestra (which existed from 1968 to 1973) recalls how ‘Cornelius told me I wasn’t singing properly. I never really sang again after that.’ Fowler then cuts to another interview with another associate, who eulogizes about how Cardew constantly encouraged untrained musicians: ‘he gave us permission’. The deliberate foregrounding of these kinds of contradictions can be viewed as an exposition of the themes of élitism and accessibility that underpin the artist’s wider practice.

Although Fowler’s film could be said to be ‘concerned’ with Cardew, even that term must be used advisedly. Like his previous films What You See is Where You’re At (2001), an exploration of the work of maverick Glaswegian psychoanalyst R.D. Laing, and The Way Out (2003), a fragmented portrait of enigmatic musician and Homosexuals front-man Xentos Jones, Fowler’s most recent project is not a documentary in the conventional sense. However, this kaleidoscopic and enigmatic view of Cardew’s life and work, realized through unconventional juxtapositions of first-person interviews, recent and archive footage, still photographs, short animated sequences and predominantly unreleased music, is entirely appropriate to the subject matter.

Often Fowler’s technique seems to echo Cardew’s working methods in pieces such as The Great Learning (1968–71), a six-hour choral work based on the Confucian scriptures and performed by students, and amateur, professional and non-musicians. Archival footage of this performance takes in a floor strewn with items including a record-player, a cheese grater and balls of cotton wool, and performers carrying out actions and gestures such as skimming tiny stones across the surface of a drum or strumming on a gilt plate rack. Pieces such as these were shaped by Cardew’s rhetorical remark, ‘If it is possible to spin gold from straw, surely it is possible to spin bronze from brown paper, or silver from the waterfall?’ There is a sense in which this film, like Cardew’s musical experiments, looks not to the dominant or expected modes of documentary-making, but adopts a deliberately tangential mode which viewers might regard as either ‘bronze’ or ‘brown paper’. Fowler’s awareness of the themes that recur in both his own practice and that of Cardew seems to be confirmed by the fleeting appearance of the filmmaker in the film, as he follows an interviewee up a flight of stairs. This Hitchcock-like cameo can be viewed as a self-conscious allusion to the way in which the film eschews ideas associated with conventional documentaries (such as transparency and journalistic objectivity), to instead position Cardew as a metaphorical figure, or even as a double of Fowler himself.

The numerous deliberate elisions of biographical fact in the film contribute to the sense that it is not really about Cardew as such, but rather about wider issues raised by his practice. For example, the composer's extensive involvement with both Karlheinz Stockhausen and the school of John Cage, and his notorious subsequent rejection of the work of both men, is alluded to several times but never discussed in detail. One section of the film is entitled ‘Stockhausen Serves Imperialism’, after Cardew’s notorious 1974 book of the same name; however, the details of his estrangement from his former mentor are never spelt out. Similarly, the names of Fowler’s interview subjects are not supplied on screen, so the uninitiated viewer has to guess at their identities and probable relationship to Cardew. Perhaps most glaringly, Cardew’s tragic early death (in a hit-and-run accident outside his London home in 1981) is referenced only through a card that is flashed up, showing his image and dates of birth and death. It is significant that two of Fowler’s subjects to date (Laing and Cardew) are deceased, whereas the other, Jones, refused to participate in or co-operate with the making of The Way Out. As these characters never speak directly to the camera but appear only through archival footage or the recollections of others, the ‘portraits’ that emerge are strange and incoherent.

In a sense the deconstruction of these characters that arises from Fowler’s methods is akin to the therapeutic situation. In the essay ‘Video: The Aesthetics of Narcissism’ (1976) Rosalind Krauss argues that, in contrast to the instant feedback of performances to camera, in the therapeutic situation ‘the patient disengages from the “statue” of his reflected self, and through a method of reflexiveness, discovers the real time of his own history. He changes the atemporality of repetition for the temporality of change.’ In Pilgrimage from Scattered Points this disengagement seems clearest during a scene in which Fowler repeatedly inter-cuts footage of Cardew shaving with a still photograph in which he is already clean-shaven. As Cardew is not aware of or involved in Fowler’s filmmaking process, the narcissistic relationship with the mirror/camera is cancelled – Cardew is recast as ‘material’, which is then rearranged using editing techniques analogous to the ‘temporality of change’.

One important implication of Fowler’s work stems from the way it reopens a dialogue on historical figures and events. His film closes with archive footage of members of the Scratch Orchestra debating the problem of reconciling social and political responsibilities with a commitment to experimentation and self-expression. They do not reach a conclusion. In this final scene Fowler shifts responsibility for resolving the issue out of the frame and into the consciousness of the audience.