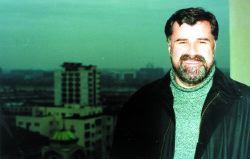 Lou Reed once interviewed Václav Havel, President of the Czech Republic, who came to power in 1989 following the Velvet Revolution (named, to some extent after the Velvet Underground, of whom Havel was a fan). He asked him if he thought music could change the world. 'Not in itself,' Havel answered, 'but it can contribute to that significantly in being a part of the awakening of the human spirit.'

The implications of that statement are at the heart of Matthew Collins' new book This is Serbia Calling (2001), which documents the role played by Belgrade radio station B92 in Serbian resistance to the dictatorial rule of Slobodan Milosevic during the 1990s. B92 was set up by a group of young activists intent on providing a forum for alternative viewpoints to those expounded by the Serbian state-controlled media throughout the war and beyond.

A beacon of hope for Serbia's so-called 'lost generation', whose lives and prospects had been severely crippled by the Milosevic-orchestrated Balkan conflict, B92 was the only station in Belgrade playing Rap, Techno and the more inflammatory Western Rock. Perhaps the most interesting of the oppositions Collins explores in his book is that between the music B92 broadcast - the revolutionary sounds of Public Enemy and The Clash - and the government-endorsed 'turbo-folk' that soundtracked the nationalist cause, a kitsch, sugary amalgam of disco and traditional Folk melodies.

The state used 'turbo-folk' as a way of manipulating the attitude of the Serbian people: it was numbing, excessive, and it encouraged brainless submission. In contrast, B92 struck back with Curtis Mayfield's 'Move On Up' and brutal Acid House. As eloquently as any cultural commentator, this sonic war expressed the polarities of the Balkan situation: the battle between old-guard nationalism and the courageous ire of Belgrade's freethinkers.