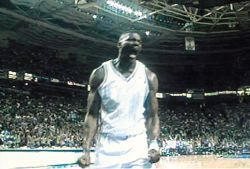 At six feet seven inches and 235 pounds, Larry Johnson is the prototype for the new model army of NBA players: fast, expensive and very much in control of his body's innate gifts. LJ is the 'talent' - a highly evolved role player, a utility man. After eight years in the league he's a living logo, instantly recognisable even in the small markets - say, Cleveland or Sacramento. Johnson's tough but sweet; he wants you to know he has a soft side. But you won't see it on the court - there he's a wide-body force, a schoolyard gladiator that can actually shoot.

An enforcer, really, but when he dunks? Well, welcome to the show.

With Larry, you've got the total package - a fully formed, photogenic man-child. Sound fundamentals in a Soloflex chassis who can practically taste the endorsements and the product tie-ins. Check it: Cotton Club side-parting in his hair, tight fade in the back, and a gold tooth glinting in the baby spot. In the shoot-around at the Garden, Johnson's all easy smiles and soft kisses off the glass. He's got his warm ups on so you can't see the coiled muscles in his legs and the thin sheen of sweat building up on his arms.

Here's the sequence: lights dim, cue the Chemical Brothers' 'Block Rockin' Beats', strobes pan wildly over the crowd, and the players butt chests as they are introduced at centre court. Cut to anthem, then the tip-off, and now the two teams mix it up. LJ dunks with two hands - an overhead slam that rings out as the rim snaps back into place. He glides back to earth and stands there for a moment, exultant. Johnson's happy. He's so happy he can barely contain himself. So he doesn't. He lets out a fierce cry, a territorial shriek - a private moment and a network photo-op.

In Paul Pfeiffer's 30 second DVD loop, Fragment of a Crucifixion (after Francis Bacon) (1999), Larry Johnson becomes a magnet of triumphal male fantasy. His body, trapped in a loop, becomes a blank screen upon which we project feelings of omnipotence and ecstasy. Pfeiffer digitally edits out all traces of the game - the ball, the backboard, other players - and centrally frames Johnson as he triangulates in three different positions. A disembodied comic book hero, he's ringed with a cosmic nimbus as flash bulbs explode around him, illuminating him in a halo of light. The crowd seems hushed and removed, a pixellated coliseum of entranced viewers hanging on every twitch of Larry's celebration dance. This is what they came to see: a peak athletic experience so transcendent you forget everything that led up to it. No longer two teams locked in combat, now, it's just a lone figure, shorn of context, letting loose with a primal wail like a sacred obsidian statue roused to life.

Pfeiffer trades on our desire to humanise the machine. As professional sports become one more genre of 'reality' competing for mindshare in the media sensorium, players are reduced to this year's model - live action animatronic dolls erased of subjectivity and plugged into the loop like a string of code. As in game theory, we cheer for Johnson the 'set of actions' rather than an individual character imbued with complex motivations. Ironically, Pfeiffer uses the same digital technology that dehumanises and spectacularises the game to reclaim Johnson's individuality.

In this sense, Pfeiffer is a digital intimist, co-opting the three by four inch frame of the screen to render a miniature backlit world, a tiny pointillist screen grab that begs scrutiny, proffering a tacit invitation to identify with Johnson's tormented howl. While wide screen cinema and projected video installations loom over us, forcing us to cower before their towering imagery, Pfeiffer's Fragment... shatters the linear narrative of two 45 minute halves, using the loop to remove Johnson from his natural orbit and recast him as mere flesh and blood. We don't marvel at a distance in the manner of film, but are thrust up close with a curious eye. Pfeiffer's sleight of hand is no return of the real, but a networked transubstantiation of divine flesh back into this mortal coil.

Like the Francis Bacon painting after which the piece is subtitled, Pfeiffer degrades the image so that we look at it with fresh eyes. Bacon's 'Crucifixions' and his 'Studies after Velázquez' map Adorno's notion that 'after the Holocaust, there will be no more lyric poetry' onto the stoic countenance of Christ and Pope Innocent X. Bacon updates a complacent (and obsolete) psychology for an anxious post-nuclear age. Likewise, Pfeiffer uses the loop like a makeshift zoom lens, isolating Johnson from the flow of the game, erasing his identity as branded media icon so that his humanity resonates with our own. In becoming a universal template of our desires and longings for cathartic release, Johnson sacrifices his own personal history, his circuitous path up the NBA ladder.

In John 3:16 (2000), a frozen image of a basketball practically laminated to the screen, Pfeiffer takes his aesthetic erasures and subtractions to another level - more formal, wholly minimal. The monitor becomes a tightly strung drum upon which the ball is inertly framed. It floats before the crowd, gets palmed by a player, appears to bounce off the rim, but at all times it is the ball which hovers in a steady state, while the action shifts dynamically in the background. The liquid flux of the slipping arena foregrounds the ball's own weird stasis. We focus on the sphere like a still life - it offers itself as a meditative object as seamlessly as a bust or bouquet, resting on the surface of the flat-panel screen as if it were a glowing plinth or phosphor vitrine. In a sense, reality, in all its technologically mediated versions, requires a leap of faith. The ball, three times removed from lived experience - the actual game, its televised version, Pfeiffer's digital manipulation of the televised version - begs that leap so that its image can attain the rapt eternal power that it so cunningly promises. Pfeiffer conflates our willing suspension of disbelief, with the jump from faith to belief, and in so doing elevates the flickering image of the ball to the eternal.

But in Pfeiffer's DVD loop The Pure Products Go Crazy (1998), titled after the William Carlos Williams poem, we get closest to his notion of the hyperreal as eternal essence: taking the famous scene in Risky Business (1983) in which Tom Cruise dances in his underwear, he freezes the moment when Cruise humps the couch like a man possessed. Again, Pfeiffer's digital voodoo traps Cruise in the terminal logic of the loop like an arcade game demo, vibrating maniacally until we focus helplessly on the purity of his white briefs. Here, the loop is both microscope and telescope, enlarging the quotidian, even as it pulls the distant horizon in front of us. 'It is only in isolate flecks that / something / is given off / No one / to witness / and adjust, no one to drive the car' Williams's poem concludes, and in these words we see Pfeiffer's point: in attuning us to the 'isolate flecks,' be it a thundering victory cry, an elegantly frozen basketball, or an emblem of youthful male sexuality, Pfeiffer casts light on the cloistered regions of our perception, gently forcing us to look again and again and again.