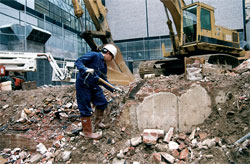 In December a court ruled that the Barnes Foundation could break its founder’s will and move the famed collection of Modernist art from its quiet suburban mansion in Merion, Pennsylvania, to a new building in downtown Philadelphia, where it hopes to attract more visitors. Writing in the New York Times, Roberta Smith celebrated the decision as a victory for the art, which might now be freed from some of Barnes’ more idiosyncratic installation requirements. Some 100 miles north, The Museum of Modern Art had just unveiled its new Yoshio Taniguchi building, lauded primarily for the achievement of making its own architecture ‘disappear’. Another great collection had been liberated, this time from the constraints imposed by successive layers of expansions and additions supposedly less sensitive than Taniguchi’s clean-sweep overhaul.
We were reminded of this less sensitive architecture in an awkward sub-basement room near the museum’s theatre – a part of the original museum spared by the new design – where Mark Dion’s Rescue Archaeology (2000–04) opened amid low ceilings and the old familiar patterned carpeting elsewhere banished from the new MoMA. For the inaugural ‘Projects’ exhibition the museum invited the artist at the outset of the construction process in 2000 to conduct one of his archaeological digs into the soon-to-be-excavated foundations of the sculpture garden. Dion was excited to uncover, among other things, the remnants of Bruce Nauman’s Audio-Visual Underground Chamber (1972–4), which Nauman had buried there during his 1995 retrospective. By the time Dion was able to gain access to the site, however, it had been largely despoiled by contractors. He shifted to a solo salvage operation, rooting around with a bucket and spade for any interesting artefacts he could glean. He also expanded the project to include two related sites, the demolished Dorset Hotel next door (whose Art Deco lounge was a favourite after-work watering-hole for curators from the 1940s onwards) and some nearby brownstones purchased by the museum and ripe for demolition.
In recognition of these sites Dion organized Rescue Archaeology around three main components: a small archaeological laboratory, where it appears as if the artist had just stopped working on his findings; a large aluminium case and chest of drawers where he displayed them; and three fireplaces salvaged from the row of houses, their mantelpieces jammed with period photographs of the buildings and ephemera such as matchbooks and ornamental plasterwork. The drawers of the case open to reveal neatly organized sets of ceramic shards, razor blades, children’s marbles, 1950s-era soda bottle caps and other such prosaic miscellany – all given value by the artist’s attentive and tender typological presentation.
Dion has conducted archaeological digs in a Venetian canal (1997), in the mud along the Thames beside Tate Modern (1999) and on the grounds of the Queens Museum of Art (2001), characteristically glossing the social and cultural fictions of museological organization. As institutional critique, Rescue Archaeology is particular in that it specifically proposes a link between the physical (as opposed to organizational) construction of the museum and the material culture it is obliterating. By literally mining the foundations and scouring related structures just before demolition, Dion empowered that which was condemned to the deepest of storage: the oblivion of entombment beneath the churning machine of the museum. This was a brave project for the museum to present at its reopening. His finds remind us of the casualties – the forgotten, the ignored, the destroyed – of the ceaseless upward march of Modernist progress enshrined upstairs.
Our approaches to the new MoMA and the soon-to-be-old Barnes museum underscore the belief that art objects exist on their own distinct metaphysical plain. But Dion, despite his reverence for even the most banal bits and pieces, looks critically at this assumption, insisting on art’s constantly evolving relationship with the architectural and social spaces it inhabits. In this case, museum architecture becomes shorthand for the ambiguous embrace of history itself, which is always reframing the terms of memory. Some fragments remain, but most are cast back down into the hole until someone digs them up. Rescue Archaeology seems to literalize Albert Barnes’ pronouncement that ‘art is a fragment of life presented to us enriched in feeling by means of the creative spirit of the artist’.
As part of his project, Dion interviewed the ageing chairman emeritus and trustee David Rockefeller about his memories of growing up in one of the brownstones long ago subsumed by the already growing museum. Dion asked Rockefeller to recall his kindergarten years – less to reconstruct the interior of his childhood home than to illustrate an exercise in futility parallel to Dion’s own. In Rockefeller’s words one feels the aching grind of the mind as it tries to make sense of lost time and vanished place. Invoking the same hopeless struggle to rescue something long gone, Dion burnishes our experience of the present with a melancholic glow.