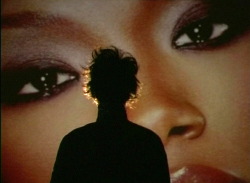 The tawdry but somehow romantic elegance of certain aspects of British culture has been the subject of many of Mark Leckey's previous video pieces. From his homage to the hybrid dance culture of Northern Soul in Fiorucci Made Me Hardcore (1999) to the uncertain grubby haze of a house party in We Are (Untitled) (2001) Leckey has displayed a fascination for pallid English youth's fantasies of transatlantic counterparts. These works picture a shabby, counterfeit culture which has nevertheless acquired a delicate mysticism far removed from the original.

Leckey's new film Parade (2003) dreamily depicts another kind of escape from the pressing reality of contemporary urban life. A shadowy figure with a bouffant and cigarette clutched between heavily ringed fingers is superimposed on a continually panning collage of billboard beauties, electrical stores, pawnshops and harsh artificial lights. This trip through banal streetscapes leads eventually to the desperately luxurious emporia of some stylized Grand Boulevard, all monogrammed awnings and reproduction chandeliers, their refinement displaying an exquisite disregard for the restraints of good taste. In one, a display of red patent slip-ons, ivory silk scarves and suede gloves provides a sickly array of possibilities for sartorial transcendentalism, and fingers lewdly caress the upper of a shoe made from some exotic leather, while in the background a voice that might be a sample of Vincent Price in a Hammer horror breathlessly pleads, 'Will you lie with me, will you abandon your delicate innocence to my desires?' The camera pans onwards, past indistinct cut-out figures: casuals, a sinister toff in top hat and cape, perhaps an Eton scholar, all style icons of one sense or another. We are led through empty panelled rooms that conjure up bedsit-land tinged with Georgian opulence, to the accompaniment of a sound-track composed with an eclectic and highly erudite range of samples that is jauntily ominous in a cinematic kind of way. The film ends (or rather brings us back to the beginning, as if in a continuous loop) with the figure, who is in fact the artist himself, looking improbable but not inelegant, casting his shadow against the backdrop provided by group of shadowy figures and the word 'parade' picked out in scrolling letters.

The work has a sophisticatedly lo-fi feel and its deliberately crude layering of static images lends it a certain hand-made aspect - a self-consciously retrograde quality that introduces a degree of nostalgia. It brings to mind early pop videos, with their not entirely convincing use of special effects. The film's style also appears to reference (perhaps unconsciously) the works of a number of other artists and filmmakers, from Kenneth Anger to Rainer Werner Fassbinder to Laurie Anderson. This strangely atmospheric concoction looks far beyond the bounds of youth or consumer culture; it's part self-portrait, part homage to the brittle pleasures of the aesthetic consciousness. Parade trawls through the city - from sordid, semi-suburbia to the most ravishing showrooms, catering for what seem to be the exotic tastes of a secret and decadent aristocracy. It's a fevered search for the most particular form of sumptuous and rare beauty and creates a distinctly 19th-century atmosphere, evoking the sensibilities and fascinations of writers such as J.K. Huysmans, Charles Baudelaire, Oscar Wilde et al. The solitary character at the centre of the film has all the qualifications for a contemporary dandy or flâneur, both of which are very apparent in much of Leckey's other work.

Parade depicts an airless and enclosed urban landscape from the viewpoint of the bohemian outsider - a picture of extravagance, eccentricity and flamboyance. Yet its sensual and sensory fantasies are inextricably bound to the mundane. Parade is about the common pleasures of aesthetic life - a type of morality governed by music, hairstyles and clothes, by shop windows and their contents, where Carphone Warehouse and Tiffany provide delight and despair in equal measure.