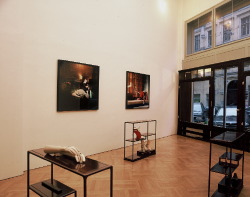 Markus Schinwald's recent solo exhibition was a procession of no fewer than 46 works, beginning with photographs of Taiwanese 'snake women' acrobats (Vicky, Monika and Mei Ling, all works 2003) and ending with a jiggling larger-than-life marionette dubbed August. The works deal with the interrelated themes of the cultivation of the body, and altering perception through whimsical prosthetics in a freestyle trans-historical and trans-cultural fashion. The result veered between the macabre or slightly freaky and the quaint and amusing.

Schinwald obviously likes to be generous to his audience. New curiosities in different media appeared throughout the somewhat disjointed rooms that make up the gallery space. This was refreshing, even though it ran the risk of making the show ramble like an overburdened first novel, or of evoking a Viennese bric-à-brac shop. It appeared as if Schinwald wanted to use and exaggerate the fragmented nature of the space to achieve the awkward elegance that he favours in his works, such as the cut-out white kid evening gloves placed on Shelf 03. And although the different series of works in the exhibition varied wilfully in style and form, the mental leaps they required, if stretched or dislocated at times, were nonetheless intriguing.

Beneath images of acrobats in contorted poses, Schinwald arranged four chinoiserie rosewood 'Shelf' works, each of which includes a collection of the artist's sculptures, fetish objects, film and performance props, including objects such as a silver pipe, snakeskin sport shoes and a chrome necklace that is more of a neck brace, which featured in his video Dictio pii (2001). Schinwald's customized fashion items or accessories are at once desirable and repellent and often gravitate between hip and ridiculous (not a bad combination) - for example, a pink dental plate swinging off a silver earring hoop in a tiny ornament arbour.

The artist also revisits cultural sources closer to home, including Biedermeier portraits and Viennese architecture. His video Diarios (to You), projected in a mock cinemascope letter-box format, was composed of a series of good-looking black and white stills of subjects, including a well-known Austrian actor, cowboys on horses, trees, the Clemens Holzmeister Crematorium and a church designed in 1965 by Viennese Modernist sculptor Fritz Wotruba, known for his massive, hewn abstract work inspired by the human form. Added to all of this were voice-overs reciting indistinct texts. The video seems to rely on creating a somewhat morose atmosphere rather than making any readily digestible audio-visual point. In comparison, Schinwald's series of Iris prints based on manipulated vintage prints and two restored, overworked oil paintings, all of terribly stiff-backed Biedermeier nobodies modelling an array of amusing contraptions, have a uncaptioned cartoon-like directness. Among them are Joseph, who is being suffocated by a scarf wrapped around his face, and Theodor, whose watch chain looks like a spider's web.

Like Narnia in C.S. Lewis' novel The Lion, the Witch and the Wardrobe (1950), the final space in the gallery could only be accessed through the open back of a built-in wardrobe (Wardrobe), and, even though that may be coincidental, here Schinwald seemed to be stepping into new artistic terrain. Beneath a ticking 11 Stunden Uhr (11 Hour Clock), against the backdrop of a forest scene print-out (Autumn), a suited, middle-aged, portly gentleman is taking a walk and getting nowhere fast. His jointed right leg is jerked by a fishing line attached to an invisible mechanism concealed in the ceiling. Absurd and uncanny, the ensemble recalls works by Robert Gober and Siobhàn Hapaska, although Schinwald's dummy makes no effort to look real despite the fact that its rudimentary movement gives it a crude semblance of life. The puppet reminds us that walking 'naturally' isn't as easy as you might think - dancers, for instance, meticulously train this skill. Whereas elsewhere in the exhibition Schinwald proposes models for augmenting the body, here he postulates its complete replacement. His empty-headed, cultivated man seems content with painted scenery and letting someone else pull the strings.