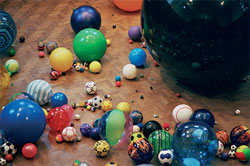 The usual buoyancy that we have come to associate with Martin Creed was largely absent from this exhibition. In his previous work the light mood of each piece tended to disguise the gravity of the ideas underpinning it. Since it is such a joy to float about in a room half full of balloons it is easy to forget the conceptual rigour of the work. The fact that each new instalment alluded to a further ideological condition of the gallery space by tinkering with its physical properties – a doorstop restricting entry into a gallery, the lights going on and off, the walls growing perfectly formed warts – can be overlooked, a direct consequence of Creed’s light touch. Not that Creed was producing some kind of strait-laced institutional critique: the work was always too ambiguous for that. Instead he introduced a series of tactile disturbances into the gallery, subtly unnerving its smooth diurnal running by aggravating the traditional conditions of exhibition display.
Unusually for Creed, the work in the two central galleries of this show eschewed any tactile effects whatsoever. What remained was a series of straight- forward conceptual gestures whose ramifications seemed less complex than usual (the balloon pieces in particular spring to mind). The installation that greeted the viewer upon entering the gallery, Work No. 370: Balls (all works 2004) consisted of a series of plastic balls nonchalantly scattered across the ground floor space. Given that the idea behind the work was so open-ended – to scatter an array of balls in a given space – it lacked much sense of conceptual precision and complexity. Focus thus tended to shift towards the actual formal properties of the spheres themselves, some of which were common footballs while others were more exotic beach balls. But even though many of the latter were colourful and either semi-transparent or reflective – introducing a rare element of optical play into his work – and were a variety of sizes and types, they were dwarfed by the architectural details of the gallery’s impressive central space, diminishing a sense of formal presence and interest too.
Work No. 371: Elevator ooh/aah up/down, a four-part sung harmony in which voices moved either up or down a chromatic musical scale, fared better. The work dynamized the space it was in, since the elevator was a feature of the gallery space itself that activated it. By so doing it recalled Creed’s earlier doorstop interventions, which directly interacted with the gallery space in which they were located. But not only was the new work more tuned to this specific space (every commercial gallery has a door or two, but how many have elevators?); it also deftly introduced elements from Creed’s parallel activity in music. And although he has previously injected elements from his music into his art – by using metronomes and musical scales, for instance – here this was done to greater effect. The sung notes softened the barbed nature of many of Creed’s earlier interventions into gallery spaces. The admission price of a bump on the head that the doorstops demanded was replaced by a tactic in which the specific characteristics of the space were foregrounded by making the viewer more physically aware of their passage through it. Hence the overall effect of the work was more ambient.
The lift opened onto the first-floor space, which contained two pieces: Work No. 374: Love and Work No. 373: Highlight and Marker Pen Drawing. The former was a simple white neon glowing sign, while the latter consisted of ten sheets of A4 paper immaculately filled in with differently coloured pens. Since once again Creed’s Conceptual gestures were not wrapped up in wit or humour the gesture felt empty and the work rather flat. But even if only for introducing Work No. 371: Elevator ooh/aah up/down – the only work here that really extended his ideas to date – the show still represented a worthwhile addition to Creed’s oeuvre.