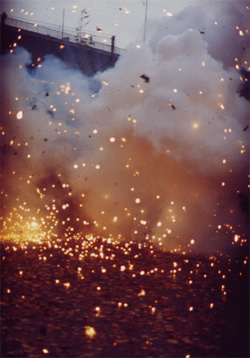 Mathilde ter Heijne’s video No Depression in Heaven (2006) begins with a black screen accompanied by folk singer Sarah Ogan Gunning singing the traditional song ‘Oh Death’, which she rewrote in 1965 to express the misery of Depression-era Kentucky miners. Images framed in black – reminiscent of early silent movies – then appear of two women: one poor, one rich. The former anxiously paces her miserable cabin as if she’s searching for something; the other, in an ornate villa in the Southern States of the US, rings her hands; perhaps she’s praying. They look like sisters – not least because the artist plays both parts herself.

Soon, the rich woman also begins to stalk around, and it becomes clear, as the women chase each other from one set to another, that the rooms are connected. When they draw revolvers, a showdown seems inevitable. The muzzle flash makes it apparent that the rich woman was quicker on the trigger, but a second shot is fired, and the song ends before the screen once again turns black. In her own way, the poor woman has clearly triumphed. This plot, involving rivalry between two women from different sides of the class divide, was a stock narrative device in ‘women’s movies’ of the 1930s.

In Ter Heijne’s recent exhibition at Arndt & Partner in Berlin, the video was presented as part of the installation Depression Years: a doll with built-in loudspeakers, dressed in the poor woman’s outfit, broadcast Ter Heijne accompanying Gunning’s lament. Although at first glance the figure recalls a waxwork, the face actually looks more like a painted mask; the skin is smooth and hard. This is probably because it was created at Babelsberg film studios near Berlin, where dummies made for stunt scenes do not have to be as perfectly illusionistic as a dummy created to look like a real human.

The Dutch artist has used many of these dummies as her doppelgängers. The first wore a trench coat and trainers and stood in for the artist during a fall from a bridge in the video Mathilde, Mathilde (2000), which was based on the life of three heroines called Mathilde from three different 1980s French films, who all die as a result of unhappy love affairs. The doppelgänger’s fall is preceded by a long scene in which Ter Heijne heaves the heavy mannequin over the parapet. Another doll took her place as a suicide bomber in the video Suicide Bomb (2000), in which it was placed against a concrete wall and blown up. As a reference to feminist histories, the dummies hold their own severed heads aloft in a moment of frozen triumph, recite monologues by half-forgotten women writers, or sing dressed in the graceful linen caps of recently rediscovered female painters who were contemporaries of Vermeer.

‘I am the first woman artist to turn her body into a dummy’, says Ter Heijne. Although this sounds like an unlikely claim, she may well be right. Feminist artists have often worked with their bodies, used their own clothing, their own image, their own organs: Carolee Schneemann’s Interior Scroll (1975), for instance – a naked performance during which the artist read out a text pulled from her vagina. But the self-portraits that have been exhibited as sculptures – be it Duane Hanson’s or Ron Mueck’s – tend to be by men.
Ter Heijne has twice chosen to devote pages from her own catalogues to conduct interviews with various women: she talked to theorist Elizabeth Bronfen about life, love, death and the female corpse, Margarethe von Trotta on what it means to be a feminist filmmaker, and various other women about natural disasters, fatal love, the Bronze Age, contemporary terror, and the representation of domestic violence in interactive theatre.

Although Ter Heijne may seem to complement a male-dominated form of self-representation, she is not narcissistically putting herself centre stage. Of her dummies, she states emphatically: ‘They’re not me. They’re functional objects for special effects.’ What she does is make her own body available for other people’s stories. This tallies with her willingness to adapt her abilities to an unfamiliar reality (rehearsing opera arias if need be, or learning to speak Chinese without an accent) – opening up her allotted gallery space to contexts that are not necessarily her own.