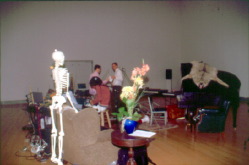 Matmos (musicians Drew Daniel and M.C. Schmidt) have won their reputation by combining sonic abstraction with physical frisson. At its best, their music keeps both terms in play: serious electro-Conceptualism is held in tension with deflating humour, oddly embodied samples/sounds produced, for example, by rabbit pelts and rubber shirts, and fleeting after-images of dance music's body politic.

For their two-week residency at Yerba Buena, Matmos transferred their home studio to the gallery - piano, carpet and all. The installation was both laboratory and the messy scene of a child's first birthday. Laptops and synths were present, but buried under piles of incidental noise-makers: fifes, recorders, party hooters, a kazoo, tin cans, flowers, maracas, an 'Amazing Animal' play-synth (grrr!, woof etc.), helium-filled balloons, a 'Speak-and-Spell', bongos and guitars, a growling wolf skin, a mounted skeleton and more. Speakers were located in each corner, creating a reverb-drenched surround of noise generated by whatever was being banged on or bowed at any given moment. Daniel and Schmidt maintained a constant presence in the installation, reporting faithfully each day for six hours or so - hence the title: Work Work Work. Indeed Schmidt maintained a meticulous office chic: he wore shirt and tie without fail, and was as dapper and severe as could be. Typing away at his music programme, he looked perfectly middle management. Daniel, on the other hand, was strictly dress-down Friday, with shirt untucked and freaky-colourful tie-dyes.

The sounds they produced only sometimes gelled into music. At other times the viewer got a particularly demystified view of what digital musicianship can entail - aimless doodling and droning, hours spent tinkering and manipulating a single sound and then sudden, stunning intuitive leaps. The installation sought to take the studio as its subject, though Matmos' installation lacked the mythomania that often accompanies artists describing their creative processes. It was Bruce Nauman's vision of the studio that came most insistently to mind, in particular his deflating photographic and video works from the late 1960s, such as Failing to Levitate in the Studio (1966) or Revolving Upside Down (1968). The scene of 'artwork' is rarely intense or poetic by these lights; more often it is mechanical, methodical, pointless, introverted, masturbatory, merely repetitive or silly. Sometimes inspiration never arrives, or appears in unrecognizable forms; 'artwork' frequently fails to produce art. Which is to say that creative labour often looks like anything but work.

The least satisfying moments of Work Work Work were indeed the ones that most resembled work: men with furrowed brows staring intensely at laptop screens, while sampled glitches hummed from the speakers - the image of serious information management going down. Work indeed. This seemed to occur most dramatically in the several instances when Matmos knuckled down to improvise with guest artists - improvisation tying Matmos to more hermetic modes of collective laptop jamming. It came as no surprise that these collaborations were sometimes less than thrilling: Matmos' music is most intense when it flirts with genre and composition; free improvisation doesn't necessarily play to their strengths.

More often, however, the installation took on a quirky, social character. Daniel and Schmidt interacted informally with their audience, sampling their voices or giving them an affable crash course in experimental sound manipulation. The installation had an air of intimacy quite uncommon for such a huge gallery; attendance varied, but there were frequently fewer than ten people sitting around the outskirts of the gallery or in a comfy chair in the centre. Visitors would hang out in the gallery for hours listening intently or - interestingly - engaging in activities of their own: drawing, filling out crossword puzzles, playing games, talking quietly, reading, sewing. One woman sat with the musicians for an entire day and knitted a funky-colourful hat (I have no idea if she gave it over to Daniel or wore it home herself). Work Work Work seemed to provoke this kind of introverted, half-attentive activity, a mirror image of the musicians' own distracted labour.

These immersive activities all actively 'read' the installation as it happened, and changed its tone - something that seems characteristic of Matmos' working procedure in general. The woman knitting did this transformative reading especially well: her work reflected their studio manipulation as a kind of domestic labour, as housework, a reading enforced by the homey surround of their possessions if not the emptiness of Yerba Buena's gallery. When her work was done, Matmos brought in a hotplate and made pancakes for visitors and a bemused museum staff (and of course, the artists sampled the hissing oil on the griddle): it seems they decided to do a little housework of their own.