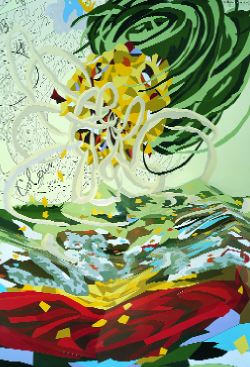 For the time being, the idea of possibility may be the best way to approach Matthew Ritchie's work. His ambition is grand, but, as with most able storytellers, his narrative is fairly direct, with only the occasional dangerous diversion to provide cliffhangers. His aim is to time-travel: to tell two stories simultaneously from two points in time and from a perspective only he understands. In the end, it takes a leap of faith to believe Ritchie when he says 'It's all made up. Except for all the parts that are true.' What is true is that you can understand his earlier work more clearly once you have seen his more recent paintings. Looking at them is a learning game which unfolds in stages, creating causalities along the way. After all, the press release for this installation Parents and Children (2000) declared 'Forget everything you know'.

Ritchie describes legends about the universe that unfold before our very eyes. It's a path well trod, but the difference with Ritchie is that his story aligns itself with the morphology of video games. To appreciate that these narrative levels exist in parallel dimensions helps you get your bearings.

Now, I have not set to memory the 49 characters that inhabit Ritchie's universe but it is clear that part of his legend is a love story built around the inevitability of a metaphysical tragedy: an astronaut, in love with an actress pregnant with his child, who is also loved by a golem, is secretly sent into space. When the astronaut's space capsule is recovered it is empty, and so the actress ends up with the golem. All of this has taken place by the time you walk though the gallery doors. Ritchie blackmails us into researching his past story while simultaneously looking forward to what might happen in it. You could see in Parents and Children - which was a majestic installation - how a hectic red sphere has come to represent time, that red snakes symbolise entropy, and that, taken together, they signal the loss of energy over time. In other words, you have to become familiar with Ritchie's iconography to play his game.

The epic scale of his almost operatic project gives him the last word, so to speak. You can only invest yourself in his art once you have the patience to do so. Ritchie demands we all become archaeologists, and saddles us with the decision about whether or not to keep digging. As the artist wrote in the catalogue of a previous exhibition: 'The Fast Set: The lives of saints and madmen lie on this fault-line of absolute belief, absolute desire.' Whatever else he may have accomplished in the short term, Ritchie has so twisted the values and anticipation we have for an artist that normal expectations fall into swift atrophy. Repeat: forget everything you know.

With enigmas pending, Ritchie turns critics into punters, or more likely odds-makers, and I will take his bait and speculate for a moment. If you shake the cover off the catalogue of 'The Fast Set', you will find hidden clues in the form of photographic details: the pregnant actress, a space monkey all suited up, and mysteriously altered diagrams of the launch and recovery of a Mercury spacecraft. I can only speculate whether the actress has become a parent or if the monkey reaching out for an adult hand could be her child. And then I began looking closely at Parents and Children and realised that, for the time being, to marvel is the only response to the bulk of Ritchie's art - there are no complete answers in it. And these days that is not a bad return on desire. Leaving this exhibition, I reflected on what a terrible shame it would have been had we decided to give up on Carroll or Duchamp at the moment they became complex. We should rise up as far as we can to glimpse Ritchie's atlas of the universe, knowing we can only rise so far for now. I took comfort in a passage from Duchamp's White Notes (1958), A l'Infinitif where, under the heading 'Dictionary and Atlases', he wrote: 'There is also "geological landscapism": different formations, different colours - a mine of information!'