BY Christopher Bedford in Reviews | 01 APR 11 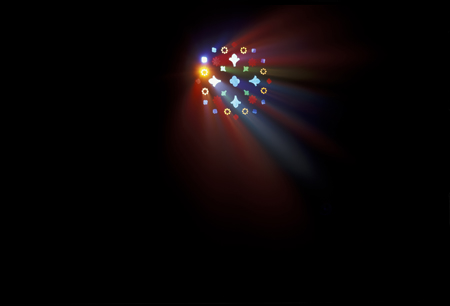 ‘A spiral is moving towards me. It’s made up of tiny, wee dots and it’s very faint. It’s coming from the left,’ intones a calm, assured female voice during the opening few seconds of Melvin Moti’s film, The Prisoner’s Cinema (2008), which was the centrepiece of his exhibition at MIT’s LIST Visual Arts Center. This nameless woman’s account of an unspecified spectral phenomenon continues accruing detail for a few more seconds, only to be interrupted by a sharper male voice piped in from elsewhere that asks ‘what’s the size?’, with a faint edge to his delivery. The woman’s increasingly strained description of the amorphous scene unfolding before her seems to slowly summon those images for the viewer, at which point the related acts of listening to her voice and watching the film are overtaken by a prevailing, unifying desire to align the former with the latter. So irresistible is this compulsion to match description with image, in fact, that the experience of Moti’s film becomes a concentrated attempt to occupy precisely the sensory subjectivity of the narrator: as she reaches to assign specific language to fugitive fields of colour that morph, moving in an out of focus, so we struggle to see those images through his words.

The Prisoner’s Cinema is a fictionalized account of the visual hallucinations experienced by a person subjected to prolonged sensory deprivation. As the artist notes in an accompanying brochure, before scientist John Lily’s experiments using pitch-black sensory deprivation tanks, it was assumed that the brain becomes less active when under-stimulated, effectively going to sleep. In fact, Lily’s experiments demonstrated precisely the opposite: deprived of adequate stimulation the brain becomes hyperactive, producing in turn a standard set of hallucinations – variable constellations of luminous geometric shapes that are common across time and cultures – suggesting the possibility of a shared formal experience beyond specificity and subjectivity; a kind of universal, if somewhat dehumanizing, formalism.

The Prisoner’s Cinema cleverly illustrates and then unravels and allegorizes the possibility of a universal perceptual experience, taking an oblique but effective swipe at the very basis of formalism, both as a method of looking and as an aesthetic commitment. The more the narrator toils in an effort to translate what he sees into words, the more compelled he is to interpret and personalize his vision, and the more difficult it becomes to align word and image without modifying both according to one’s own perception. In fact, for long stretches of the film, reconciling the narrator’s account with what we are shown becomes close to impossible, resulting in a three-way dissonance between narration, image and one’s own experience. Moti’s lone, disembodied narrator, then, becomes an index of subjectivity in all its boundless variance and multiplicity. As that voice itself notes: ‘it would take an hour to describe one second of what’s happening accurately.’ In that statement lies the hypnotic appeal of Moti’s project, and the ultimate fallacy of a subjective experience perfectly shared. As last words – ‘this is truly the most amazing sight I have ever seen’ – are uttered, the screen is utterly black.