Memorial to the Iraq War 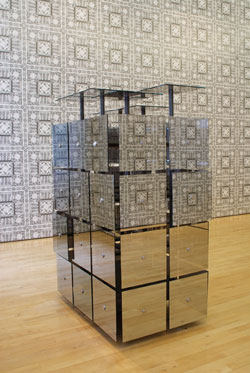 Iraq, as everybody knows, is a benighted, blood-soaked mess. Saddam Hussein may be dead, but conflict still ravages the country he once ruled. So the ICA’s decision to mount a group exhibition entitled ‘Memorial to the Iraq War’ seemed deliberately provocative, even perverse. How could any artist set about memorializing a conflict that hasn’t ended?
Twenty-five artists – including names from Europe, America and the Middle East – were invited to produce proposals, resulting in a wide range of interpretations of the idea of a war memorial. For Never Ending Story (all works 2007), the first work visitors saw when entering the ground-floor gallery, the New York-based Nate Lowman had grouped together several rusting Shell petrol pumps from the 1950s and 1960s. Some of them were ripped open, as though a fireball had blasted their mechanical innards into oblivion. The piece played on the commonly held idea that the war in Iraq is being waged to control the country’s reserves of oil. Petrol-pump side-panels, in the context of a show about Iraq, resembled coffins waiting to be shipped back to the West. But Never Ending Story also transcended mere illustration of the quagmire in Iraq. By presenting the pumps as relics of a bygone, oil-dependent age, it suggested that fossil fuels have had their day (the irony of the title being, of course, that oil’s ‘story’ will end within decades). Alluding to the petrol pumps in the paintings of Edward Hopper, Lowman’s installation also seemed to represent the US and suggest that the country is in a dismally dilapidated state: a vision of a desecrated American dream.

Close by were two similarly high-impact sculptures. Keith Wilson’s Forest of Steles was a thicket of tall, glossy steel panels that could have passed for elongated sculptures by Keith Haring. Iraqi Stars, by the Dutch artist Marc Bijl, consisted of three large wooden stars coated in concrete plaster and painted in the colours of the Iraqi flag. It looked like the kind of monumental public sculpture favoured by Saddam and had been deliberately chipped and pockmarked, as though scarred by bullets and shrapnel.

Less spectacular but equally powerful were three photo-collages depicting adolescent limbs, by Collier Schorr. These milky, marmoreal body parts were poignant reminders of those bitterly unlucky people whom war maims. ‘The most brutal thing about war memorials is how clean and tidy they are. They are everything war is not’, Schorr wrote in a news-sheet that accompanied the show.

Relegated to the corridor leading to the bar and upper galleries containing the second half of the show, Schorr’s contribution could easily have been swapped with one of the patchier inclusions, such as Norwegian artist Matias Faldbakken’s flimsy Untitled (Slayer upon Slayer upon Slayer), which consisted of the word ‘Slayer’ written three times on the wall in black tape. Equally crude was Sam Durant’s suggestion consisting of piling debris created by the war on top of Downing Street, London and the White House in Washington (Proposal for Iraq War Memorial, Symbolic Transposition of Effects of War in Iraq to the US and England: 10 Downing St, Parliament, US Capitol and the White House). Beneath the description of Durant’s proposal was a rudimentary collage of the White House peeping out from a jumble of bombed-out, mangled car chassis.

Upstairs, the Slovakian artist Roman Ondák presented Snapshots from Baghdad, a disposable black camera on a white plinth. We were led to believe that the film contained pictures from Iraq’s war zones – but of what remained a mystery. The idea of taking holiday snapshots in Baghdad is, of course, grimly ridiculous. By refusing to develop the pictures captured on the film, Ondák questioned the appropriateness of focusing on wartime atrocity at all. The camera’s glossy black lens stared out at the viewer: an inscrutable, sphinx-like eye.

In the same room was German artist Klaus Weber’s steel sculpture The Breeder, a frame-like, Minimalist structure containing hundreds of butterfly cocoons. Inspired by the ban on importing butterfly pupae into the US imposed in the wake of 9/11 for fear that terrorists could load anthrax onto the insects’ wings, Weber’s idea was that during the course of the exhibition butterflies would break free of their chrysalises and flutter out of an open window onto the street outside. On my visit all I saw were ranks of shrivelled, desiccated cocoons. The sculpture looked more like a miniature mausoleum than a breeding ground for new life. Yet the prospect of meta-morphosis and rebirth was touching, making this one of very few works in the exhibition that was neither angry nor hectoring – but filled with hope.

Alastair Sooke is a broadcaster and an art critic at The Daily Telegraph. He lives in London, UK.