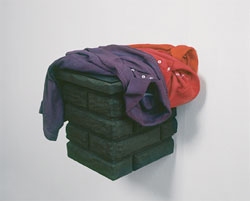 I imagine the artist hunched over his cast-iron Singer sewing machine like a prissy Golem, fashioning, with determined fists, plant forms in blue denim to crown forked silver antlers. Despite initial appearances, however, the object he’s manufacturing isn’t some reflection on the Germanic stag archetype. His confabulation seems to have been chopped up and thrown down a picturesque ravine (good riddance to a lazy folk emblem), looking more like animal amputees sprouting fabric tendrils from resin stumps – all sprinkled with a little movie stardust. Elsewhere, polo shirts sit on a shelf like colour samples, only without the usual flowery names for the various emulsions. Again, prissiness creeps into this piece in a delightful way: no sewing machine this time, but several chilly hours up to the elbows in fabric dye. It’s strange how this kind of craft has been successfully subjugated in the work. Somehow the overall impression is not of a cutting-edge fashion boutique in a European capital, although the components could and almost should lead to this conclusion, for a spirit of insane application runs through his working process regardless of the outcome. As Josef Hoffman said, ‘We are in no position to chase after daydreams. We stand with both feet firmly planted in reality and need tasks to carry out.’
The task in this case is the creation of Michael Stumpf’s latest seasonal collection dedicated to his muse – cinema. His invasion of the Collective Gallery’s curious architectural shoebox of a space, presented as part of their innovative New Work Scotland Programme, espoused an uneasy filmic rhetoric with a passing glance at the decorative arts. From the street the extravagantly large pane of glass that usually forms the front of the space had been screened off, giving the gallery a fourth wall and making the room more akin to a classroom. This odd assemblage, created in a studiedly half-hearted manner, ensured that Stumpf’s objects eluded the burden of conclusions. The work’s narrative framework was coolly insinuating, but at the same time its cinematic allusions were to popcorn and hot dogs as much as to any art-house cinema chic. His finicky facture seems uneasy with the world of drive-ins and multiplexes. In The Landscape is Changing (all works 2004), a branch, heavily coated in silvered resin, emanates from an upturned popcorn box. Each face of the carton carries a film advert and the name of a month, written in chunky text, while an enormous scrunched paper-popped piece of corn sits uneasily beside it. Uma Thurman wielding her sword from the side of the box would make little impression on this outsized snack monster.
The idea evoked by slogans in the wall-based pieces was that of the ‘new Riviera’, a phrase stencilled onto a found poster in one piece. Stumpf’s hyperactive carelessness, though, doesn’t suggest retired film directors puffing on fat cigars in the south of France. Any serenity in his Riviera is corrupted by a sense of lack of control. Just as in J.G. Ballard’s Cocaine Nights (1997), in which the endless balconies of a gated community bake in the sun while the residents attempt to keep themselves amused, only having to work for a decade before they finds themselves with ‘50 years of idleness in front of them’, so Stumpf’s communities of objects suggest endeavour preceding an odd fossil age – bleached balconies becoming stratified retirement rock, a Riviera museum. The language of film is as literally bound up with poetic elements in Stumpf’s work as the popcorn is tangled with denim ivy. As Hans Arp put it, ‘at the edge of the fairy-tale the night knits roses’.