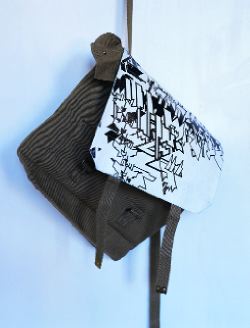 Over the past decade mass manufacturers within the music industry have been telling us that vinyl is an obsolete medium. Digital alternatives may have an unknown lifespan and a different quality of sound but are considered preferable as they are cheaper to produce, distribute and sell. Vinyl is, however, a long-lasting, almost archive quality format for collectors and so 12-inch pressings are the format of choice among the discerning. Michael Wilkinson's exhibition 'Vogue' engaged with both vinyl culture and artificiality - taking its name from the stylized dance of the late 1980s that mimicked the poses of fashion models.

Coda (all works 2000) is a piece comprising four cardboard boxes that contain four separate collections of monochrome paintings in black, dark blue, yellow and red. These 12-inch square paintings on board, presented racked together like records, did not appear to have been influenced by any particular painting heritage, although grouped together they become sculptural. The work references the sleeve designs and culture of contemporary electronic music by the likes of Stefan Betke (Pole), Thomas Brinkman (on his own Max Ernst label) and Kit Clayton. The understated sleeve designs of such musicians have grown out of the 'white label' culture - where records pressed and distributed without printed labels in plain card sleeves can attain an almost mythical status. Contemporary electronic music also, of course, frequently samples music of the 1970s and 1980s, which it then recontextualizes. Wilkinson does something similar with music packaging.

Two identical 12-inch square paintings on glass, Lightning Strikes Twice reference Japan's album Gentlemen Take Polaroids (1980). The original image of lead singer David Sylvian caught in a rainstorm has been replaced by a small detail of forked lightning painted in enamel against a black background. Rendered on 4mm thick glass, these fragile paintings are far removed from industrial printing presses. Yet, although handcrafted, the paint, applied to the back of the glass, has a flatness and gloss veneer far superior to printed and varnished record sleeves.

A larger work, Farben Mirror, consists of an oversized reproduction of a 12-inch EP confusingly inscribed with the words 'farben featuring the dramatics a side, live at the Sahara Tahoe, 1973 b side one. at the golden circle stockholm vol. 1, 1965 b side two live at the roxy, 1984. all written and produced by Jan jelinek, klang elektronik'. Beneath this text a pixellated image of two members of the Baader Meinhof gang reproduced on mirrored glass recalls the mirrors with encapsulated images of pop stars that used to adorn teenager's bedrooms. The confused dates of the inscription (one of which refers to an Ornette Coleman recording), the uncaptioned, Pointillist image and the reflective ground lend the work an air of nostalgia, but for when and for what are unclear.

Kit comprises an army surplus canvas bag inscribed with musical references hung on the back of the gallery door. Instead of band names and song titles, however, Wilkinson has reproduced some contemporary hieroglyphics sampled from the poster accompanying a recent untitled record by Kit Clayton. The original recording was released in a plain green sleeve, without labels on the disc. Only the name of the record label - appropriately (in this context) The Mimic and the Model - was scratched into the vinyl.

The contemporary collector's fascination for particular vinyl pressings and their protective sleeves finds a precursor in the archive of late Latin literature owned by Des Esseintes, the protagonist of J.-K. Huysmans' novel A Rebours (Against Nature, 1884). Huysmans' character had his treasured books pressed in obscure type onto inappropriate handmade papers and bound with exotic covers and fittings. Although Wilkinson's refined reproductions have a more utilitarian look, his inquiry into the gnostic packaging of contemporary music is reminiscent of such mal du siècle studies.