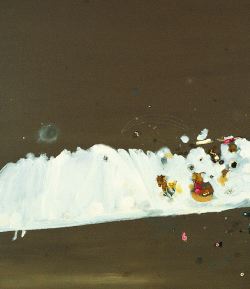 I am intrigued by Michelle Fiero's paintings and I like the way she plops little skeins of paint onto the canvas. Although they resemble McDonald's milk shakes, these paint puddles are too dense to melt completely, and stain the picture plane with intimations of real or implied movement. They attest to their existence like thoughts jettisoned by the artist: their placement, colour and squirming don't seem all that calculating. It's as if the artist had other, more pressing, things to do, but, at the same time, the paintings don't look so much unfinished as not really begun. She abandoned them, aquiver with potential, but they didn't respond to the situation, didn't react with the canvas or morph into something else.

At first glance the paintings were a joke I simply couldn't get. The way the thick paint clings to the canvas reminded me of the kaleidoscopic maquillage of Tammy Fae Baker, another old joke that was never very funny but, with a certain topicality, was forced into our ken. I couldn't discern any verve and brio in the way these reservoirs of goo clung to the surface. I know what I wanted to see in them - the sultry rhythms and verbal-become-visual languishing of a Billie Holliday song. But no, they appeared divested of the slightest resonance: it would be foolish to read anything formal into them because nothing seems to have gone into them but the application of paint.

What results from this aesthetic of abstraction, this leaching out of emotion, poetry and feeling, is simply a material festering on the canvas, like the sight of a side street in an industrial part of town where the graffiti, piles of rubbish and corrugated roofs lie abandoned and condemned, milked dry of potential. The question remains, though, what one is to make of these paintings, so emblematic of the impossibility of meaning in any larger sense, and so teasingly defiant of analysis.

It's like looking at, and feeling, the crags and crevices of once-molten lava and fantasizing about the eruption that formed it, imagining the noises, odours and heat. What really lies behind this body of work is the spectacle of the artist leaving paint behind on canvas before scurrying off to pursue something more tangible,
and more imminent.

Which is why I like this work so much. Fiero has so perfectly spayed the inevitability of broader, universal meanings, focusing instead on the localized non-sense of raw material littered without mediation on the expanse of the canvas. You can only appreciate the manner in which the work stands poised on the verge of communicating some kind of feeling, while remaining coyly non-committal to such simple ontological tasks, as if questions of being or not being were not worth the expended time and energy in the first place.