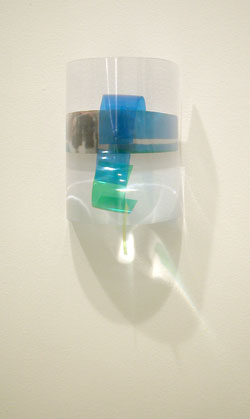 Few artists, with the undeniable exception of James Turrell, exploit the convergence of light and solids or the resemblances of air and water as Mitzi Pederson does. Merely entering the San Francisco-based artist’s understated show of sculpture and drawings seemed to produce ripples of sound or altered air pressure, disrupting the small room’s delicate equilibrium and lagoonal tension. Although her pieces are responsive to changes in light or even the slightest breeze, their effectiveness lies in Pederson’s calculation and control. They feel distilled. The artist thrives on throwaway items such as cellophane streamers, recycled photocopies, bits of plastic and flexible strips of wood, glamming up what could feel prim or whimsical with silver-leaf and black glitter. She makes precision seem effortless, her pieces more glancing clues than complete evidence.

Pederson’s generally diffident installation pivoted on two suspended sculptures, sometimes when and timefolds (all works 2007), similarly composed of plywood strips, bowed with taut nylon fishing-line and on one side partially silver-leafed. Her frail components intercepted the ambient light, the pieces anchored by their shadows. In the simpler sometimes when, the arcs float one above the other, the bottom sliver of a crescent moon hovering just inches from the floor. The two bows, occasionally quivering, form a disjointed, not-quite mobile, parabolas held in easy tension. In timefolds the arcs were set in uneven orbit around the room’s large cylindrical support column, linked by thin strands of cellophane with one end weighted with a loop of clear plastic magnifier.

Cheap plastic magnifiers, curiously watery in their effect, figured in several of the wall pieces, including the squid-like hello again, a gelatinous loop of clear magnifying plastic trailing several cellophane tentacles. The magnification suggested a jellyfish or some water-filled vessel. Without satisfying any literal, descriptive agenda, this struck a decidedly female tone. Traditional women’s skills often involve transformation: the conversion of thread into cloth, yarn into knitwear, and even straw into gold. There are affinities throughout Pederson’s work with Joëlle Tuerlinckx’s spare boxes and objects that, set in relation together, become more than the sum of their slight constituent parts. Like Tuerlinckx, Pederson recognizes that what is flimsy in one context may become a key supportive element in another.

Another wall sculpture, CCM, a small, thick cuff of clear plastic magnifier pinned to the wall, seemed a further permutation of the underlying watery theme, the understated vaginal allusions of her refractory lotus trefoil adding complexity to the prismatic reflections echoing the arcs in the larger hanging sculptures. Other pieces suggested conception, in particular dreampulse, a combination of acrylic and glitter on a photocopy in which a nimbus of white punctuates the otherwise black surface, the white area broken by a black shape suggestive of an fallopian-ovarian side-view. Here the corporeal becomes an engulfing interiority, an unsettling sense of violated incubation.

A series of small graphite drawings on dusty pink and powder-blue vellum also suggested gestation. Particularly striking was displace, in which most of the rosy surface was left blank, the lower left-hand corner occupied with abstract shapes that looked like the traces of weary flesh and bones. Like dreampulse, displace and a certainty felt like exposures of intimate interiors, suggesting the indistinct shadows of ultrasound images. With all the works on paper there was the distinct sense of something not meant to be seen.

In other drawings Pederson’s abstract shapes are seamed and fissured, like granite eaten away by wind and water, the effects of both elements sustaining and wearing down. She gracefully alludes to natural processes and organic properties rather than illustrating them, exploiting or displacing the effects of light, structure and gravity through play. The ad hoc mutability of much of her output, with its careful yet unprecious and unpredictable presentation, creates a quiet exhilaration. Pederson’s art exerts more power than her attenuated compositions at first suggest. Although the demands she makes on the viewer are substantial, with sustained and patient looking the subtle rewards more than compensate.