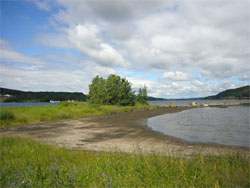 There are some words which, if they acquire any more meanings, are going to become blank ciphers keeping company with the hieroglyphics that weren't explained by the Rosetta Stone. I am thinking of, in particular, ‘subject’ (and its corollaries ‘subjective’ and ‘subjectivity’), ‘spectacle’ and ‘absurd’. The last of these was the theme of this year’s ‘Momentum’, the festival of contemporary Nordic art, for which ‘absurdity’ was returned to its philosophical sense of acting in the face of the meaninglessness of life. Søren Kierkegaard describes this as a virtue, the ‘virtue of the absurd’, and even as an act of faith. Man takes step after step without knowing why, and, lacking belief in a higher moral purpose, progress is reduced to repetition – a notion reflected in the Beckettian title chosen for the biennial, ‘Try Again. Fail Again. Fail Better’. The curators of ‘Momentum’, Annette Kierulf from Bergen and Mark Sladen from London, here link absurdity to a formal concern with repetition and a general feeling of existential uncertainty.

The pieces chosen to reflect these considerations made for a fine group show, but as a biennial ‘Momentum’ was slightly underwhelming. The works were installed and selected conservatively: many of the artists are already often grouped together – not just the Scandinavians but also the strong contingent of current and former Glasgow-based artists (Sue Tompkins, Phil Collins, Camilla Løw, Lucy Skaer, Rosalind Nashashibi) and Frankfurt Städelschule alumni (Thomas Kilpper, Tue Greenfort, Jeppe Hein, Knut Henrik Henriksen, Sergej Jensen, Michaela Meise) exhibiting here. Perhaps this smallish-size show would have benefited from simply being larger.

Progress à la Beckett was best seen as a point of resistance: a challenge to find meaning, not futility, in repetition. Johanna Billing revisited her well-known video Magical World (2005), in which a group of Zagreb schoolchildren sing the psychedelic soul hit of the same name. In Another Album (2006), commissioned for ‘Momentum’, a group of Croatian 20-somethings join some of the Magical World participants at dinner in a garden, where they sing together casually over coffee and drinks. While dealing again with Billing’s chosen subjects of participation, reconstruction and history, this video contained elements that detracted from the cohesiveness of the group and from the song’s bid to unite them – a bored dog, for example, or flashes of sexuality in the curve of a woman’s bare leg.

Ragnar Kjartansson, an Icelandic artist, holed himself up in a barn with the words ‘Scandinavian Pain’ displayed marquee-style on the roof. Dressed in an Ibsen-era corduroy suit, he lay under the floorboards moaning. Scandinavian Pain (2006) satirized the morose Scandinavian male – Ingmar Bergman’s contribution to cinematic typecasting. This funny and rather attention-seeking exposition of a stereotype made an oddly gendered counterpoint to Kajsa Dahlberg’s adaptation of Virginia Woolf’s seminal feminist essay A Room of One’s Own (1929). Dahlberg photocopied marked-up pages of the tract from books she found in various Swedish libraries and bound these together in her own volume, laying a blank white label over the front and back covers. Inside this spare display the pages of Dahlberg’s The Room (2006) bore further traces of Scandinavian pain, in the heavily pencilled remarks of agreement and personal elaboration added by previous readers.

Much of the work on show responded to the site by extracting social content and memories from the surrounding architecture – both that of the city of Moss, where ‘Momentum’ is held, and elsewhere. Phil Collins showed present-day photographs of an abandoned factory in Kenya that had been supported by the Norwegian government until the 1980s. In a project similar to his photographs of Immanuel Kant’s daily walks through Königsberg, Joachim Koester presented a suite of photographs documenting the now overgrown villa in Sicily once occupied by the occultist Aleister Crowley. The Danish artist Tue Greenfort, in a feat of imagination and syllogistic thinking, capitalized on Moss’ infamous smell – something like cat litter – which comes from its paper mills. Greenfort discovered that another by-product of the compound responsible for the smell is artificial vanilla. He then calculated how much artificial vanilla would have been produced from the printing of the show’s catalogue and used that amount to flavour vanilla ice cream for ‘Momentum’ visitors, which was delicious.

The work of Joanne Tatham and Tom O’Sullivan dealt with absurdity head-on, in three of their large-scale painted pyramids (You Have Forgotten Why You Asked Me Here. I Cannot Remember Why I Came, 2005). The sculptures wore their claim to nonsense literally: one was painted in the diamond pattern of a court jester, for example, and another had hay gaping out of its mouth like a donkey. The brute dumbness of the three was nothing but evident: they sat in the space like frosty silent comedians. I find Tatham and O’Sullivan’s work difficult – their form suggests that meaning should be apparent but seems nonetheless elusive; in this respect they are similar to aphorisms. At ‘Momentum’ their sculptures played exceptionally well against the festival's title, if only because they recouped Beckett’s nasty side – the antagonism that must have been in someone who veered so close to refusing clear meaning.