BY Carmine Iannaconne in Reviews | 12 NOV 00 It would be relatively simple to produce a line drawing of a Monique Prieto painting. Her abstractions are so schematic as to seem naive: configured of various irregular forms, all painted in solid colours. However, attempting such a sketch would immediately prove two things. Firstly, those simple forms are far more complex and intricately articulated than they may at first appear; secondly, their casual arrangement produces a set of completely hidden compositional forces that are virtually impossible to reproduce. If you were initially inclined to bring a certain light-heartedness to Prieto's paintings, uncovering their deceptive attributes might teach you to be more cautious: it's like petting a sweet kitten who suddenly decides to show you its claws, but still remains ever the sweet kitten.

Never Again (all works 2000) offers a good lesson in her diagrammatic sleight-of-hand. Two major lateral forms in contrasting colours create a strong horizontal just above the centre of the canvas. Another big mass piled on top should create a sense of weight pressing down, except that its grey, cloud-like colour renders it weightless. This whole ensemble sits atop another collection of loosely interlocked forms which are either holding the first ensemble up, or are themselves being held down. It's not that there is no gravity in a Prieto painting, it's that gravity has run amok, turning on and off as gleefully as a kid playing with a switch. As a result, the paintings can look logically constructed while they make the nature of that logic an open question.

In her newest work, this paradox is augmented by a highly orchestrated use of colour. A set of earth-toned vertical units in Brown Power feel like they're caught in some kind of force field that's pulling them wildly out of shape. But that's a contradictory notion, because it's impossible to say what the forms' original shape might have been. Nonetheless, what makes the mood of distress convincing is another, smaller set of shapes locked into the lower left corner of the canvas. Not only do these occupy a strategic position in the overall composition, but, painted in brilliant fuschia, radiant yellow, and rock-solid red, blue, and green, seem to generate the impalpable power that can bend neighbouring elements and cause them to feel stressed.

It is that sense of an internal, animating principle that makes Prieto's abstraction unique, as though she were picking up the torch of Vitalism lit earlier in the century by artists such as Hans Arp. The Vitalists also used asymmetrical arrangements of form to produce imagery possessed of playfulness - playfulness being deemed a species of energy which could give the work vitality. But where the hallmarks of their work were smooth, curving surfaces which intentionally recalled the living quality of plant and animal tissue, it is the absolute flatness of Prieto's shapes which gives her canvases the screen-like quality of a video image, as well as a highly regularised kind of irregularity which calls to mind pixellation or digitisation.

If both of these references lead away from biotic metaphors they still update the Vitalist's ambition to create animate forms by pointing toward another lively reference: animated cartoons, an ironic example of inanimate material come to life. In some of her pictures, the shapes seem to be holding themselves erect, like crude protoplasmic entities trying to rise to their feet, trying, that is, to become figurative. Appendages seem to emerge and define themselves, becoming aligned with body masses. The warm body in Warm Body looks distinctly like a giant larval form, pulling itself across a clod of misshapen earth, excreting a ribbon of green and itself colonised by an assembly of dark, intestinal forms resting on its back.

But the more one can form such associations, the less interesting the pictures become, and some of Prieto's current work does begin to draw ominously near to what feels like the baited trap of representation. The appeal of her work has always been in its evasiveness, its ability to stage dramatic situations in a space somewhere between the viewer's psychological projections and the paint's physical realities 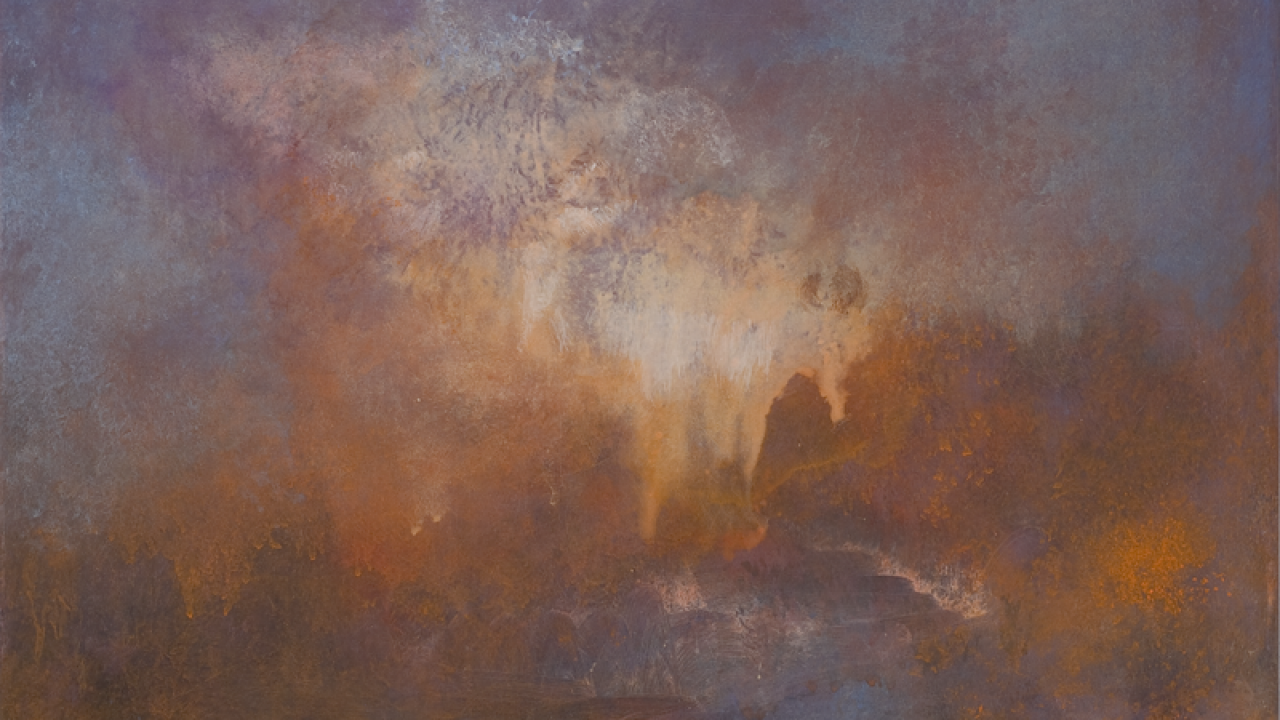