Smartphones vs. The Live Experience 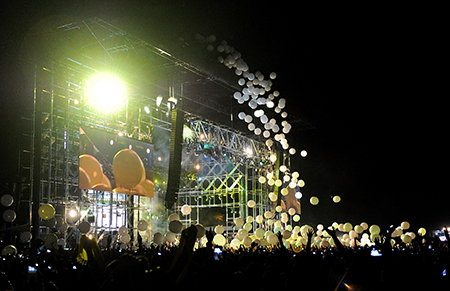 I know first hand how distracting it is from the stage to see the blue glow of a phone screen light up an audience member’s face. Nevertheless, it’s odd that so many musicians are trying to discourage or even ban the use of smartphones at shows. Wasn’t the social media this device connects to crucial in filling the very room they now want to command without its help? It seems rather ungrateful.

Not to mention impossible, too. All manner of deterrent strategies are employed, according to the personality type of the band. Prince threatens (‘Purple Rules … will be strictly enforced and violators will be asked to access another experience’). Bjork reasons (‘This is distracting to Bjork and she would encourage you to please enjoy being part of the performance and not preoccupied with recording it’). She And Him cajole (‘At the request of Matt and Zooey … enjoy the show they have put together in 3d’). Yeah Yeah Yeahs are in your face (‘PUT THAT SHIT AWAY as a courtesy to the person behind you and to Nick, Karen and Brian’). Savages shame (‘Our goal is to discover better ways of living and experiencing music’). I found each of these messages photographed and posted online, evidence that none had succeeded.

Dictating any kind of specific audience behaviour from a concert stage is not only quixotic, it’s pretentious to boot – witness Arcade Fire’s recent attempt to instate a dress code (‘Please wear formal attire or costume’) for an arena tour with stops at such venues as the Quicken Loans Arena, Canadian Tire Centre and Rexall Place. (‘White tie or black at the Rexall tonight, love?’) If Arcade Fire had been hoping for a Spiders From Mars-like carnival atmosphere at these shows, better to be like David Bowie and lead through example. There were no signs posted at glam shows, lecturing about the benefits, both personal and social, of glittery eye shadow. Nor did the Ramones require leather and denim for admission to CGBG. Audiences do what they want, not what performers will. And what today’s audiences want, it would appear, is smartphones.

Which is why I was all the more surprised by ‘Onto Objects’, a recent event organized by Liz Munsell at the Museum of Fine Arts in Boston (MFA), where a gallery packed with 20-somethings sat in voluntary electronic blackout, while artist Jeffrey Gibson gave a very wordy performance – much of it delivered prone on an analyst’s couch. Artist Patty Chang then held the audience’s attention an equally long time while reading from a prepared text, seated at a desk. Not a click, not a flash, not a tap on a screen was heard from the audience till the very last drop of Chang’s breast milk had filled a Chinese tea bowl to the brim (that’s another story).

Of course, the instant these performances ended, smartphones came whipping out in an orgy of documentation. Standing amid the flurry of post-performance electronic messages, the museum’s curators looked absolutely delighted. Not only had they not told anyone to ‘put that shit away’, they hadn’t instructed them to share, though clearly that’s what they were hoping this young crowd would do. As anyone working for an art museum knows, the same demographic most likely to attend a rock show – 18 to 34 year olds – is the hardest to get into museum galleries, much less into the membership and donor programmes that will keep these institutions from going the way of the opera and the ballet.

According to the latest figures from the National Endowment for the Arts, museum attendance in the us is, in fact, down nearly across the board – only for those aged 65 and older has it increased in recent years – but it is an especially sharp drop in the youngest brackets. Meanwhile, as would be expected, the figures for those ‘Who Used a Handheld or Mobile Device to Consume Art’ are exactly the reverse: highest for those under 35.

One response to these trends in the museum world has been a shift away from talking about ‘visitors’ in favour of ‘engagement’ or ‘participation’, which would seem to be what handheld devices offer. But isn’t this the same kind of participation that Bjork and Savages are lecturing their audience to stop? Pay attention, they and the other bands hostile to smartphones seem to be saying, as if you were at a museum.

The situation seems vexed, perhaps most so when thought about – as art museums tend to do – visually. As She And Him coyly put it, the problem for bands is that participation through smartphones is not ‘3D’. Facebooking and Instagramming the performers flattens them, frames them and turns them into commodities. In other words, these musicians are resisting being turned into art works, even as they ask their audiences to treat their shows more like art.

The paradox softens when considered in terms of sound, however. It’s the visuality of the smartphone screen that is disruptive to a musical performance. ‘Put that shit away as a courtesy to the person behind you,’ specify Yeah Yeah Yeahs – in other words, keep it out of view. The band can’t really be worried about sight lines – jostling for a better glimpse of the action is part of being at a rock show. The problem is that looking at screens disengages the audience’s hearing.

Which helps explain what I witnessed at the MFA: it wasn’t the miracle of 18–34 year olds so involved in visual art that they forgot to check their smartphones. It was sound that kept the screens away. Focusing on these two rather static performers meant focusing on their speech – phones were clearly not going to help. If you were at all invested in making sense of what was happening in those galleries that evening, you had to listen. And we listen better when we close our eyes.

We use smartphones to remake the 3D world in two dimensions, and we stare at them. If the art museum educates us to make sense of the world visually, smartphones are a logical extension of that lesson, not its antithesis. For the same reason, they can make the museum appear like so much outdated visual technology. (Which raises the question of whether the more these institutions work to resemble the ‘participatory’ nature of smartphones, the more irrelevant they become.)

When musicians express hostility to smartphones, it’s because the screen is disruptive to the experience of sound. Performance art dependent on language can demonstrate that this relationship works the other way round, too: sound is disruptive to visuality. Which, given the current state of affairs, might be a very useful thing to the art museum.