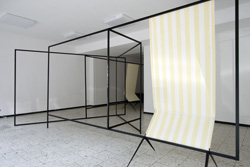 In a pivotal scene in the melodrama, Now, Voyager (1942), an aggressively dominant mother, angered by her previously acquiescent daughter’s newly acquired sense of independence and joie de vivre, taps her fingers lightly on a bedpost as a sign of her annoyance: this apparently innocent gesture a loaded signifier for the confined and restrained aspects of domestic life. However, in Grey Gardens (1975), another study of an overbearing mother–submissive daughter relationship, matters work out quite differently. The Maysles brothers’ documentary portrays the complex bond between a mother and daughter – an aunt and a cousin of Jacqueline Kennedy-Onassis – who live together in a run-down mansion in the Hamptons, haunted by memories, guilt and missed opportunities; unhappy but bound inextricably to each other.

One of Nairy Baghramian’s photographic series (Untitled, 2006) strongly resonates with the atmosphere in these movies and actually references the latter. A woman’s head is shown in close-up as she sits on a bed, her hair dishevelled by a breeze. Contact prints of several of these images from the series were chosen by Baghramian as a poster motif for her first institutional solo show ‘Es ist außer Haus’ (It is outside of the House) at the Kunsthalle Basel in 2006. In so doing, Baghramian ensured that the sparse, Modernist, furniture-like sculptures she exhibited – a free-standing white wall (Wand, Wall, 2006), a stair-like object made of painted metal (Treppe, Stair, 2006), and a lavishly designed construction called Das schöne Eck (The nice Corner, 2006), which constituted a flexible set of mirror panels resembling a wardrobe – were contaminated with an intimate atmosphere and fragmented narratives. In such a context, ‘outside of the house’ could quite literally be considered a distancing gesture from the repressions felt both in the domestic and the art-institutional realm.

For her 2005 show at Galerie Christian Nagel, ‘Die Geister mögen das Flanieren’ (Spirits like a Stroll), Baghramian applied a similar tactic. The centrepiece of the exhibition was a large structure of intertwined frames partly draped with striped marquees that called to mind the leisurely pastimes of summer. Once again, however, an absent presence was evoked – this time by the title of the work, Vierte Wand/Zwei Protagonistinnen (Fourth Wall/Two Female Protagonists, 2005), which seemed to hint at the structure’s performative nature: was it, in fact, a stage or a film set onto which two actors would shortly appear? The work thus united the domestic and the public, and reminiscences of lazy summer days with the conspicuous immediate presence of the object itself.

While Baghramian’s constructions seem to indulge both in modes of Modernist abstraction and the pleasures of interior or furniture design, they are primarily a tool for evocation. Narrative elements – derived from film, theatre, literature or the artist’s own experience – are frequently alluded to in the titles. They introduce other spaces and spheres, or they carry imprints of human presences. In Klappen mit goldenen Zähnen (Hatches with golden Teeth, 2005) – three propped-up black hatches facing each other like chatting rectangular mouths – the lean towards the anthropomorphic is obvious. In Trennwände mit Ohrringen (Anna, Martha, Vartuhi) (Partitions with Earrings (Anna, Martha, Vartuhi), 2005) the portrait features or autobiographical undercurrents are far less obvious. In the group of three large, free-standing, partition-like steel frames tightly covered with fabric, dangling steel ‘earrings’ at each side and the structures’ somewhat awkwardly splayed legs, reminiscent of those found on 1950s furniture, seem to serve as the main indicators.

But before too readily applying adjectives such as subtle, fragile or eccentric to Baghramian’s sculptures, it is worth considering their less innocuous aspects, which reveal themselves in the explicit dependencies of her structures and the flimsy supports that uphold them. In Das schöne Eck, for instance, the work’s two distinct elements, the two-part steel frame and the four-part mirror panel, are not physically connected. But even within each of these elements, the components are inadequately linked together. Another work, VP (2004), consists of a paper form slightly reminiscent of a film camera or an architectural model sitting on awkwardly angled porcelain stilts that look ready to collapse or simply break at any minute.

These insubstantial, spindly supports, which reduce contact with walls, floors and ceilings to a minimum, appear frequently in Baghramian’s work, as do photographs that are leaned against the wall rather than mounted, or placed on shelves supported by delicate mouldings or brackets. Despite their self-assured and sometimes austere presence, the instability of Baghramian’s sculptures is a recurrent feature. Such an approach speaks of a deep, underlying scepticism: the artist has already conceded the possible (artistic) failure of her works. This inclination towards the formalist reworks rather than simply supports classical Modernist claims. Her frequently sharp-edged or pointed objects transfer constructivist strategies of ‘objective’ applicability into a subjective realm. Narratives are performed by whispery voices evoking a past that can be reconfigured any second.