Within the constraints of a socialist state, Polish artist Natalia LL, who died last month at the age of 85, was a fearless critic, using her art to expose the hypocrisy of political ideologies on both sides of the iron curtain. Her best-known work, Consumer Art (1972) – a video in which a blonde woman lasciviously devours first a banana (a rare product within socialist economies) and then a sausage – has been lauded as a defiant declaration of sex positivity as well as an ironic metaphor for the consumption-poor lives within state socialism during the Cold War (1947–91). But her work expanded far beyond those themes, craving metaphysical truths.

Deliberately designing her name as a cipher (the initials LL derived from Lach-Lachowicz, a combination of her maiden name and her artist husband’s surname), she entered the Polish art scene in the early 1960s. Although the country had broken away from socialist-realist doctrine, this had been replaced by a slavish devotion to purist and moralist conceptual art that was in danger of becoming equally dogmatic. Studying at the Academy of Art and Design in Wroclaw, LL initially trained as a painter before moving on to the glass studio where she discovered photography (taught to students as an aide), which would become her main focus. Influenced by Albert Camus, Italian neorealism and Jean-Paul Sartre, LL’s first serious attempts at ‘existential photography’, as she called it, were designed to capture the physical as well as the spiritual experience of being in the world. ‘I thought photography made possible a transformation of ordinary, banal reality into a unique and mysterious event, a phenomenon,’ she said in a 2001 interview with curator Krzysztof Jurecki. ‘My photographic activities were an attempt to find that unusualness, the out-of-the-everydayness in surrounding reality.’

The scarcity of material goods in the Polish People’s Republic led the artist to explore the intersection between consumerism and feminism within a society that expected women to be both homemakers and workers. From the beginning, her interest in the body – specifically, the female body and gender fluidity – set her apart from the majority of the Polish avant-garde. Her early series ‘Body Topology’ (1967), for instance, comprises shots of herself, her husband and friends of both sexes posing naked in an empty field, obscuring their faces and genitals and therefore their identities. The work feels prescient in light of the contemporary focus on gender exploration. Similarly, ‘Intimate Registration’ (1969) is a series of photographs depicting a couple making love in graphic detail, which addresses the imbalance in how men’s and women’s bodies are ‘consumed’ in the act of looking.

At the opening of PERMAFO – the Wroclaw-based gallery she co-founded in 1970 with Zbigniew Dłubak, Antoni Dzieduszycki and her husband, Andrzej Lachowicz – LL constructed a cube wallpapered with extreme close-ups of herself and a man engaged in sexual intercourse (Intimate Photography, 1971). These photographs launched the ‘consumer art’ period in her work, for which, alongside the eponymous video, she took countless pictures of women eating food. Although this series has typically been read as a commentary on the socialist craving for western goods, from today’s vantage point, LL’s radical body of work can also be seen to position women as objects of consumption that are equally capable of consuming with pleasure.

In 1977, LL was invited to New York by the Kosciuszko Foundation, where she mingled with some of the most famous feminist artists of the time – Ana Mendieta, Gina Pane, Carolee Schneemann – while participating in LGBTQ+ demonstrations, taking various pictures of herself holding a frame from her ironically titled ‘Post-consumer Art’ series (1975). In marking her presence at such events by showcasing a work about the emancipation of communist women, LL united the trajectories of radical political art on both sides of the iron curtain.

Towards the end of the 1970s, LL devoted herself to performance. In Pyramid (1979) and Dreaming (1978), she slept in a gallery after taking sleeping pills as a kind of spiritualist seance. From the 1980s, her work began to reflect how her body had changed over the years, with distorted self-portraits such as Panicky Fear – Paradise Lost (1987), which comprises two images of the artist with her arms cut off daubed with red, blood-like acrylic paint.

In the 1990s, following the end of the Cold War, LL’s body-focused art gained further relevance, as conservative politics began to destroy the positive legacy of socialism, including the right to abortion. The artist continued to draw humorously on her most famous works, such as in Skulls (1995), photographs of skulls with a banana stuffed in their mouths and decorated with funerary flower anthuriums. In the mid-2000s, vanitas themes predominated as LL documented her (by then former) husband’s battle with cancer, in works such as Transfiguration of Odin I (2009). Throughout the decade, she continued to ‘reappropriate’ her old work by photographing her ageing body in the same poses and scenarios to capture the changes in meaning and perception of a woman’s physical appearance as she ages (e.g. Odin’s Giggle 2009). In doing so, she playfully challenges the ‘museification’ of artists, whose current practices are often overlooked in favour of their early works. 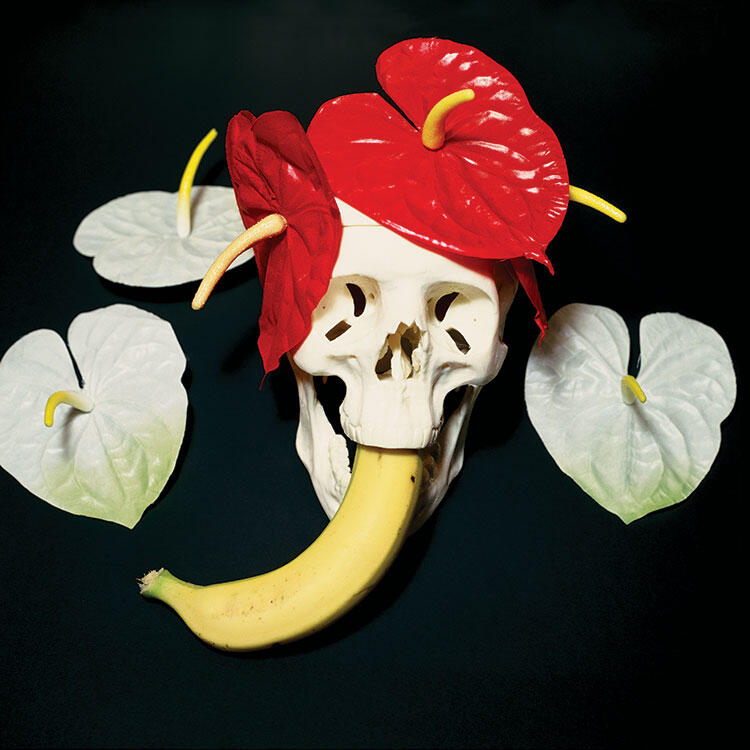 Active until the very end of her life, LL found a new generation of followers in recent years following her inclusion in several international exhibitions, including ‘Sex Work’ at Frieze London in 2017 and last year’s Baltic Triennial. This is in no small part thanks to the tireless promotion of her work by Lokal_30 Gallery in Warsaw, who continue to exhibit her rich output, some of which remains unseen to this day. In contemporary Poland, where the right-wing government is increasingly attacking the basic human rights of its female and LGBTQ+ citizens, LL’s work has never been more vital.

Agata Pyzik is a writer who contributes to The Guardian, The Wire, New Humanist. She’s the author of Poor but Sexy. Culture Clashes in Europe East and West (Zero 2014).