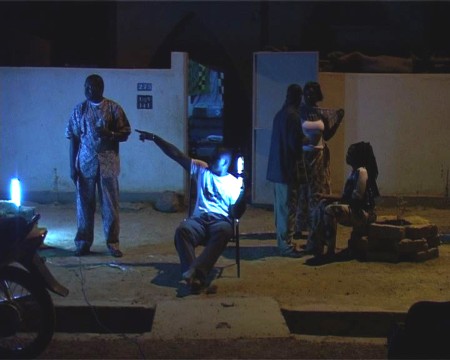 The feeling throughout Neïl Beloufa’s film Kempinski (2007) is strangely dystopian and anxious. Holding a fluorescent tube light that softly glows across his mischievous face, a man haltingly describes a world in which he is the only human left; his only companions are cows, milling and lowing around him. He describes the christening of his new baby with his cow–wife accompanied by a bovine orchestra. Spoken in the present tense, these visions of the future become eerie and palpable.

‘Ethnological sci-fi documentary’ is the self-consciously contradictory way that the French–Algerian artist describes Kempinski, the captivating video at the centre of his second solo exhibition, ‘Tectonic Plates or the Jurisdiction of Shapes’. To produce Kempinski, Beloufa travelled to Mali and asked people there to describe the future in the present tense; a deceptively rudimentary premise, but one that allows the video to capture the haunted terrain between fact and faction, the familiar and the exotic, the weight of the present and visions of what’s to come.

Though all documentary is edited and framed in a way that bends reality, in Kempinski documentary slips slowly into science fiction and Beloufa’s contradictory comment becomes the only way to describe the video’s mysterious and compelling presence. The other interviewees describe talking machines, teleportation and instant satisfaction of desires, all played out in cinematically typical (though no less potent) African spaces: the jungle at night-time; a run-down trailer; mosquitoes flickering through the glare of electric lights. Shot entirely outside and at night, the video moves between shots of the subjects and of a distant floodlight mounted in a high metal tower. The tower allows Kempinski to refer to itself as a construction, but provokes the creepy, panoptic anxiety of a Big Brother figure – one whose eye is perhaps that of the watching camera.

Hailing from a former French colony, Beloufa seems to be playing with our expectations (cinematic and otherwise) of Africa. Its presence as an unsettling place in the purview of the West, and the versions of the future proffered here violate such expectations. With Kempinski, Beloufa evokes Africa as a place of a strange and unknowable future, in contrast to the Western news cycle of a perpetually mired present with which we are familiar.

The grand and seamless gesture of Kempinksi was undercut (rather loudly and by all accounts intentionally) by the presence of the installation that encased it, a noisy cluster that included numerous other distinctive bodies of work. Each gesture and object in the exhibition connected back to a sense of sci-fi meta-narrative of current affairs. One sculpture showed a video of a tectonic model bending and smashing on the screen, shaking loudly with each iteration. The sculpture points towards the perennial prediction of ‘the Big One’ – an earthquake due to strike down California at any moment. Filtered through layers of distance and presence throughout his installation, Beloufa transforms the angular anxiety of what looms ahead into an enveloping beauty; a dark and anxious embrace always just coming to pass.