Since the early 1960s, Stephen Willats has investigated the idea of art as something that might motivate people to renegotiate their perceptions of reality 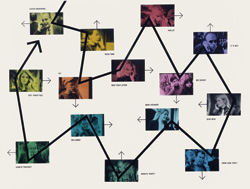 If you were a guest at a London gallery opening in the early 1960s, there’s a chance that you’ll have had the text above, or something very much like it, pressed into your unsuspecting hand. Typed on a single sheet of paper, and distributed by the artist at other people’s private views (something that caused him to be ejected on more than one occasion), Stephen Willats’ early manifestos introduced a new variable, a new possible set of connections, into a social situation in which the rules of engagement were, if not entirely rigid, then not without a lick or two of starch. Looking at a facsimile of The Random Event (1961) today, I’m struck by its odd combination of calm, Wittgensteinian precision and slightly sloppy, to-hell-with-it urgency, the deal it strikes between the careful structuring of a set of sequential propositions and their publication and dissemination in a form that’s only a little more immediate than a note scribbled on the back of an envelope or an opinion proffered in a pub. (I’m guessing that we should read ‘randability’ as ‘randomness’ and the final line’s ‘except’ as ‘accept’.) Perhaps, though, this is of a piece with the work’s art-historical context. Pioneers tend not to worry about how neat they look and are always half-expecting to be booted out the door.

Often identified as one of the founders of British Conceptualism, Willats has, since the early 1960s, developed a practice that attempts to set aside the auratic object, turning instead on the notion of art as something that might motivate people to note and renegotiate their own perceptions, and in doing so shape their own reality. Working with individuals ranging from the inhabitants of a Berlin tower block to the regulars at London’s 1980s’ underground post-Punk club Cha Cha Cha, he has instigated a large number of community-based, participatory projects whose organizing principles draw on systems theory, cybernetics and a kind of rogue sociology. Commonly these projects give rise to networked arrangements of photography, text and (latterly) video, although they may also be traced through his drawings and publications, including his occasional magazine Control (1965–ongoing). If all this calls to mind a strain of contemporary art-making concerned with communication, social engagement, active spectatorship and self-organizing systems that is now the bread and butter of biennials and ‘forward-looking’ institutions from Turin to Taipei, it’s important to remember that Willats’ practice was forged in a very different world from our own. Think of opening an invitation to a Cork Street private view while Harold Wilson prates about the ‘white heat of technology’ on the wireless, then think of, say, clicking onto an e-flux email announcement while an Al Jazeera news-feed scrolls across your screen.

While Willats’ early pieces, such as Environmental Box (1963), expanded the phenomenological and participatory parameters of the art experience through immersive, multi-channel chambers in which the viewer was responsible for tripping the switches of sensory stimulation (including, significantly, the extra-ocular stuff of texture and odour), it is his community-based projects of the late 1960s and early 1970s that best signal the direction his future work would take. Realized in the Midlands’ city of Nottingham, the artist’s Social Resource Project for Tennis Clubs (1972) was, as he puts it, ‘a conceptual and dynamic process of events which took place over several months’,1 involving the members of four different tennis clubs of varying degrees of social cachet. Accompanied by a posse of attention-grabbing, rather Benny Hill-sounding ‘Tennis Super Girls’, Willats hung the clubhouses with posters depicting bourgeois and working-class homes, then invited their members to free-associate. Next, using two illustrated I-Spy Book of Tennis-like manuals of his own design, he elicited the participants’ feelings about their clubs’ furnishings and equipment, and a list of changes they’d like to put in place. The results of these consultations were then displayed in the clubhouses, providing the members with both a collective self-portrait and a collective manifesto. Finally the artist asked the members to rewrite the rules of tennis, and to use these in a tournament in which each club would play the others. Veering away sharply from the conservatism of the official game, these matches dispensed with same-sex face-offs, the idea of winning or losing and – perhaps pace the ending of Michelangelo Antonioni’s 1966 film Blowup – sometimes even the ball itself.

Reconstituted in the contemporary mind, the activities that made up Social Resource Project for Tennis Clubs at times feel oddly similar to those that characterize corporate away-days – those excruciatingly wacky, ‘if this company were an animal, what animal would it be?’ exercises designed to build a team, or help its members think outside the ever-tricky box. Is this an indicator of how the radical thinking about social (re)-organization that Willats was exposed to as a student on Roy Ascott’s seminal ‘Groundcourse’ at Ealing School of Art in 1962–3 has been co-opted by the mainstream business world? Probably, but to recover Willats’ project, to make it speak as it once spoke, we must think ourselves back to a time in which ‘management consultant’ (like, indeed, ‘artist in residence’) was an unfamiliar term. When I talked to Willats about the piece, he told me that the members of the four Nottingham tennis clubs ‘didn’t think I was totally bonkers, because I was talking about something that related to them’. Unpack this remark a little, and what emerges is a structural rethinking of the traditional relationship between the art work and the viewer. The notion of the gallery does not figure in Social Resource Project for Tennis Clubs; nor does that of the object, its distant, genius creator, nor even that of a general audience to which it is hazily addressed. Art, here, is essentially embedded in a set of social relationships and the new realities that those relationships produce. We might picture it in terms of one of Willats’ diagrammatic drawings, such as that published on the first page of his pamphlet Random Networks (2003). Captioned ‘A basic model for a homeostatic self-organizing system’, it depicts four squares set in equal relationship to each other. Each square aims a straight arrow at its fellows and has three arrows trained on it. There is no centre here and no periphery, only a perpetual flow.

To describe more than a fraction of Willats’ prolific output over the five decades of his practice demands much more space than a magazine feature allows. Should the writer cast his participatory projects as a kind of shadow social history of post-1960s’ Britain (and, given his ongoing relationship with the country, of Germany too)? Should they focus on his interest in the urban and view him through the lens of town planning or psycho-geography, or should they, picking up on the colour-washed photographs, directional lines and Letraset text that characterizes much of Willats’ work, explore the tensions and commonalities this suggests between the structuring of social relationships, information and form? And what of his continual revisiting and redevelopment of certain projects, among them the zippered, combinable garment fragments of his Variable Sheets (1965), which in 1991 morphed into New Directions – Multiple Clothing, a fashion line to which the wearer could attach printed cards indicating their different moods, and then in 1997 into Creative Noise – Multiple Clothing, in which this malleable wardrobe gains the ability to capture, process and transmit sound, providing still further opportunities for the externalization and reshuffling of the self? (This project’s life was once again extended in 2006, when its various incarnations were showcased at a Tate Modern event that explicitly positioned their maker as having anticipated much of the ‘relational’ art of the past decade.) Thought about for a moment, each of these nodes is necessary to the web of Willats’ practice; each one contributes to what it is and may become. The artist has written: ‘The importance I feel in acknowledging the role of networks in the formation of consciousness is that it opens up the connection between context, our placement in the fabric of culture, and our subsequent beliefs and perceptions. Certainly these connections are fundamental to the forwarding of models of society – to the proposing of change to the existing status quo with which we are all surrounded.’2 As with an oeuvre, so with a world.

For his recent work New Visions. Barbican Dialogues (2006) Willats invited three individuals who identified with the positions of the 20th-century thinkers Ludwig Wittgenstein, Jean-Paul Sartre and Marshall McLuhan to walk together around the High Deck of the Modernist Barbican Centre in London, and describe in the manner of their chosen philosopher the information they encountered, from the futuristic architecture to the susurrations of the breeze. Each of these participants was accompanied by their own volunteer documentary team, who recorded their extemporized observations in various media, from written notes to video. Following this event, the three groups met in separate workshops, there to discuss in the spirit of their allotted philosophe how the documentary material might best be edited and organized. The results, shown at Victoria Miro Gallery in 2006, were accompanied by a pamphlet written and designed by Willats, in which the artist outlined the project and invited viewers to write, beneath three black and white shots of the Barbican, their response to three questions pertinent to the thought of Wittgenstein, Sartre and McLuhan: ‘How do all the facts present in this logical space total the world, when each item can be the case or not the case?’; ‘How can the absolute character of your free commitment be realized as a type of humanity, and bear upon the relativity of the cultural pattern resulting from the scene?’; ‘How are the archetypal unconscious forms being pushed out by the medium and technologies of this processed environment, outfacing into your social consciousness?’ In giving their answers, viewers developed their own set of ‘New Visions’, and one that sensitized them to the porous membranes between one reality and another. Wittgenstein, Sartre and McLuhan may have been concerned with very different facets of our shared human experience, but in this work, as in Willats’ wider practice, one principle applies: only connect.

Features
Hollywood Crawls Out of the Trump Era