The Dutch artist’s carefully scripted day-long conference, Any Other Business

Nicoline van Harskamp lives and works in Amsterdam, the Netherlands. Her film works and performances have been shown at the Van Abbemuseum, Eindhoven, the Netherlands (2008); the 4th Bucharest Biennale, Romania (2010); and Performa 11, New York, usa (2011), among others. Last year, her travelling work-in-progress, Yours in Solidarity, toured from D+T Projects, Brussels, Belgium, to the Frankfurter Kunstverein, Germany, and muac in Mexico City. Any Other Business will be presented in ‘Newtopia: The State of Human Rights’ in Mechelen, Belgium (from 1 September 2012), and she will be participating in Manifesta 9 in Genk, Limburg, Belgium (from 2 June 2012).

In 2009, Nicoline van Harskamp staged a day-long scripted ‘conference’ at an Amsterdam convention centre that aimed to investigate ‘communicative excellence in civil society and politics’. During the performance, entitled Any Other Business, 40 actors conducted ten meetings over six hours, following a script created by the Dutch artist, which she has developed into a multi-channel video installation recently displayed at SMBA in Amsterdam and which will be included in ‘Newtopia’, Mechelen, in September.

In an introduction to the conference, one of the participants announced that the event would address the question: ‘How can we communicate better?’ But the day’s events were already scripted by Van Harskamp using text compiled from various existing sources – including speeches, talks and discussions from publications and the Internet. Van Harskamp recycled this material for her actors in order to create scenarios that mimicked the mundane proceedings of political, business and community meetings. Rather than proposing methods to communicate ‘better’, her work reveals the performed nature of power via uniform modes of behaviour and presentation, something that the title Any Other Business – the standard last item on most business meeting agendas – also alludes to. Van Harskamp’s edited video documentation combines deadpan comedy and absurdly dramatic moments alongside segments more akin to documentary television or the news – yet no obvious narrative or logic unites the scenes.

Consider the word ‘dialogue’. A video displayed on a hanging screen shows a panel discussion entitled ‘Dialogue Day’, which begins with an introduction by the meeting’s Chair: ‘What we’re going to try to do today is have a dialogue […] not to discuss, not to debate, we’re going to try and tear this mess apart […] try to find how ‘Dialogue Day’ can become part of a larger tissue, although somewhat ripped.’ What transpires is a hilariously hollow and parodic discussion of what ‘dialogue’ might be. The ‘speakers’ traverse ideas such as ‘how mutual respect and listening to one another benefits dialogue’ in a revealing take on how language (even language that is actively about language) can become meaningless. Just as the word ‘practice’ has reached a kind of benign status by its over-use in the art world, the word ‘dialogue’ here becomes (almost aggressively) a relational term, one that is meant to foster meaningful social situations and exchanges without ever pin-pointing an idea or belief. 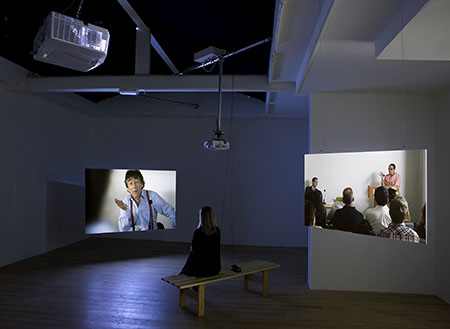 Other scenes in Any Other Business include a panel of men who – alluding to the world of finance – express a ‘profound and unqualified apology for all the distress that’s been caused’. Their evasive plea for forgiveness is followed by a series of tough questions from a judicial figure about whether their management could have mitigated the problem, to which the businessmen respond with clichéd answers. Another presenter puts forth the concept of ‘peaceful conversation’, which, rather than adopting the typical conflict model of bad/punished and good/rewarded, enables one to meet ‘both the needs of yourself and others’. Another panel addresses Communism and its failure, and another ‘the failure of non-violence in the pursuit of revolutionary ends’: many of the topics Van Harskamp puts on the conference’s agenda are meant to foster an uncanny sense of déjà vu for recent news items addressing financial fraud and political rhetoric around religion.

As much as these scenes are highly staged and controlled, with actors playing characters using Van Harkskamp’s scripts, the dialogue is taken from sources that were all originally scripted for specific purposes. So as well as revealing the ‘performative’ nature of language – as in the effect that certain styles, words and emphasis have, an idea first developed by J.L. Austin in How to Do Things with Words (1955) in regard to ‘performative utterances’ – they also reveal the ‘performance’ involved in creating this affect. Thus Any Other Business negotiates the performance of power and the power of performance.

Van Harskamp has referred to Hannah Arendt when discussing her address of power and systems of discussion, stating: ‘In simple terms, [Arendt] claims that to make a “free” or democratic society, we should not focus on the content of our politics but on the way our politics are “done”.’ This could be said to be true of any institutional system. I have sat in endless meetings wondering who the people in the room are performing for and why. But just as ‘any other business’ connotes, the art world has its own coded language used to perform power. As much as this power is presented via the common language of ‘business’, doesn’t power ultimately derive from real knowledge and its dissemination? As such, Van Harskamp’s Any Other Business reveals the heteronomy of language today and its failure to effectively communicate – instead acting as a thin veneer over our fragile human interactions.