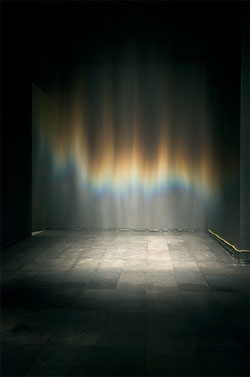 Writing about Olafur Eliasson’s work poses the same problems as writing about dance. How does one describe in words the temporal but non-verbal experience of an Eliasson project? Andre Levinson, the leading dance critic of the last century, could have been thinking of the Danish artist when he wrote in 1925: ‘Nothing is more difficult than to reduce the essential aesthetic realities of the dance to verbal formulas. Our ordinary methods of analysis are of very little use in dealing with this art [...] We are exceedingly ill equipped for the study of things in flux – even for considering motion itself as such.’ ‘Things in flux’ are precisely what Eliasson creates, through spectacles across which his audience moves like dancers across a stage. What he offers is a string of distinctive vantage points, just as with dance, and the impossibility of writing down more than a simple description of something so transient and multi-faceted is precisely what mystified Levinson.
Eliasson’s works often include mirrors – another link to the world of dance – which invite us to watch ourselves, and those who may happen to be there with us, traversing his stage. A large part of the meaning of his work resides in infinitely ricocheting relationships, such as observing oneself reacting to others as they respond in turn to Eliasson’s art, or watching how others perceive your experience of his art, and so on. The result is that everyone involved is simultaneously passive and active, flipping between the roles of audience and performer so quickly that this simple, conventional polarity is transcended.
In this sort-of-retrospective, titled ‘Minding the World’, Eliasson gave the business of watching the audience perform a particularly sharp edge. He provided a room-size Camera Obscura (1999) where you could surreptitiously monitor the behaviour of your fellow museum visitors as they reacted with fascination to Frost Activity (2004), situated just next door. The darkened portal of the camera obscura, off to the side of the yellowy glow that lit up the main entrance to the exhibition, was low-key, a form of subtext. While I was there, most people either missed it completely or backed out the moment they leaned into its murky entrance, as if they had heard a voice saying ‘keep out!’ But those who did slip inside found a bleary image of the goings-on in Frost Activity, and the affinities between his art and dance began to become clear – perhaps all the more so as you could watch objectively and remain secure in your role as the audience.
The floor of Frost Activity is composed of handsome pastel-coloured and unvarnished stone tiles cut from Iceland’s volcanic rock. The result is evocative of Renaissance trompe l’oeil inlaid floor patterns, where things appear three-dimensional though ungoverned by the customary single-point perspective. Visual puzzlement is inescapable; the repeating patterns ensure that uncertainty rules the day. And as if to
underscore the point, the room’s ceiling is mirrored like Eliasson’s The Weather Project (2003) at Tate Modern, meaning that the ceiling and floor echo one another. The result is that, once projected through the camera obscura, upside down and back to front, reality seems mere illusion, and reflection veracity.
The fact that visitors to Frost Activity look as though they are performing something from the Pina Bausch Wuppertal Dance Theatre repertoire would be interesting enough in itself, but another of the consequences of the back-to-front, upside-down optical effects is that the people appear to be bound by only one-sixth of normal gravity – almost as though they were on the moon. An ordinary walk becomes a loping gait, magnificently buoyant yet lyrically clumsy. Last spring the straight-talking and exceptionally talented New Yorker dance critic Joan Acocella wrote, ‘Bausch’s shows are basically assemblages of skits in which, amid elaborate stagecraft, old beauties and hypocrisies are contrasted with the frank predations of modern life.’ So too Eliasson’s work; he stands with Bausch at the intersection of image and reality.
And so in the wake of the adulation of Eliasson’s artfulness at creating visual show-stoppers (of which there has been so much that it has become routine, filled with allusions to Guy Debord’s work on spectacle and to modern art’s privileging of pure opticality), what is captivating about his work is much less the nouveau cirque side of things than the way it prompts us to frame unselfconscious skits about self-involved curiosity with his elaborate props. Levinson’s view that language is ill equipped to convey very much about subjective experience remains valid as far as Eliasson’s work is concerned, aligned as that work is with the performing arts, especially live dance. It is only when critics mistake it for mere installation art that they are able to write about it with any degree of certainty.