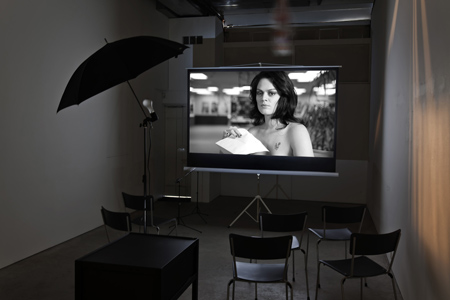 Having a short attention span would stymie most filmmakers. But not Oliver Husain, who recently explained, with a characteristic mix of insight and silliness, that he often avoids this problem by ending his films ‘the moment the set-up is laid out’. Certainly this approach drives Dear What’s Your Face (2010), the sparse installation that anchored his show ‘Cushy Number’. Some chairs, a small metal cabinet, a screen: a simple yet effective apparatus, staging a video overture for an absent film.

Or rather, several overtures, for the sequence in the video has numerous versions. In all of them, a bell rings, a photographer’s lamp in the corner dims, and then a video starts in which a camera dollies through a ream of depth-of-field gauges toward an ingénue played by Karen Monika. Holding a letter and nude but for her shoes, Monika sits on a tall chair, legs crossed to one side for propriety’s sake. But details change. The bell strikes different notes. Sometimes Monika sports outrageous lashes or seems startled by the camera. Sometimes the camera approaches her in one languid take; other versions feature several rapid-fire close-ups, each revealing a different pose. The differences add up to Dear What’s Your Face substituting breadth for length, its variations unspooling the duplicity of meaning and memory.

There also are photocopies of a script fragment, which opens with, ‘Then, the film begins’ and concludes, ‘How else to describe this feeling, there’s a simple word for it.’ The cuts at each end of the excerpt tease, but in so doing they reflect our futile (because anxious for meaning) curiosity about what precedes and follows. Nor does the gallery’s website help much. ‘Perhaps you were not expecting to be charmed by Husain’s film’, it declares, eyebrow raised. And, a sentence later: ‘You might avert your eyes when you step into the gallery. You might, but we’re betting you won’t.’ The spiel concludes: ‘No matter the source, as we read – or look, for that matter – we write.’

This Barthesian turn – reading is writing, the author’s death means the reader’s birth – comes as no surprise, given Barthes’ overlaps with Alain Robbe-Grillet and Alain Renais. For Dear What’s Your Face is starkly black and white, the visual clarity contrasting with the thematic muddiness of which sequence is ‘true’. So its obvious antecedent is the austere yet surreal Last Year at Marienbad (screenplay by Robbe-Grillet, direction by Renais, 1961).

Unless it’s Sunset Boulevard (1950) – ‘All right, Mr. DeMille, I’m ready for my close-up’ – whose faint campiness links to Husain’s quiet flamboyance. In Husain’s show, the hand-painted silk scarves trailing down through a hatch from upstairs and the ostrich-feather finials recalled other moments of elegant silliness, such as the hats that floated around his 2007 film/performance Two Half Reasons before settling down to interfere deliciously with that night’s screening. But if in Two Half Reasons our desire settled on a cake that Monika baked, in Cushy Number it landed on a still of Monika from Dear What‘s Your Face – those striking features, those enormous eyes — and which, placed just inside the gallery office, was almost certainly overlooked. The deliberateness of this image and its placement – and of the show – belies the exhibition’s title. There’s nothing ‘cushy’ about Husain’s calculating approach to his art.