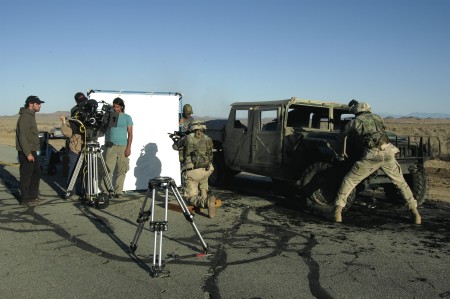 How many levels of representation are required to get a proper sense of what is going on in Iraq? Four, if you ask Omer Fast, whose video installation The Casting (2007) is displayed in a way that makes it impossible to take in every angle of this piece simultaneously. Two two-channel films are projected back to back onto suspended screens in the middle of the gallery space, allowing visitors to watch either an in-depth interview the artist carried out with an American soldier on leave, or re-enactments of the events and experiences mentioned in the interview which, although apparently portrayed as film stills, are by the actors’ very slight movements revealed to be tableaux vivants. Only at the end, or beginning, of the looped interview does it become clear that it is also a re-enactment: the young man is in fact an actor auditioning for the part of the soldier. Fast, whose presence as interviewer on one of the four screens implies a hierarchy between the two parts of the work, asks him whether he would be comfortable improvising. Yet what is presented as the improvisation of a young actor is, in fact, based on an interview with a real soldier; thus, the film depicts a ‘true story’ – or at least as true as a subjective account can ever be.
The soldier recounts a tale about a girl he once knew in Germany (where he was stationed as a US Army sergeant). They were out on a date one night when he discovered that the girl was obsessively self-harming. The car ride home became a nightmare: the girl was driving way too fast; she was out of control. The second story is about an incident in Iraq in which the soldier survives a roadside car bomb, but in the tense moments following the explosion he shoots at another car to prevent it from approaching a checkpoint, inadvertently killing an innocent man. The Casting poses several questions about the audio-visual representation of events, but at its core it focuses on interrogation: who speaks the truth? And to whom?

In Spielberg’s List (2003), one of Fast’s best-known and most successful works, the artist was already exploring his interest in ‘stand-ins’ and in the point of departure of the process of filmic representation, interviewing extras who had worked on the concentration camp film set constructed near Krakow for Steven Spielberg’s Schindler’s List (1993). With The Casting, commissioned by the Museum Moderner Kunst Vienna (where it was also on show in late 2007), he anchors this process in his own position as a spectator, which is only possible by involving himself on the screen.

Last year the film director Brian De Palma released his latest film Redacted, which also explores the lives of US soldiers in Iraq. Redacted is unique in apparently abandoning any authorial position. Every single shot is depicted as ‘source’ material – the origins of which stem from within the story: scenes of soldiers filming their own actions (and war crimes) or video footage from Islamist websites. But while De Palma completely dispenses with the authority of any kind of ‘storytelling’ and lets the material ‘speak for itself’, albeit superficially, Fast explicitly exposes his authorial hand by deconstructing it through the means of installation and abstracted re-enactment, involving many levels of ‘mediation’ (a phrase he employs in The Casting).

The work carries further fascinating implications, especially in relation to the connection made by the soldier’s story between Iraq and Germany – the latter country’s post-war history a well-known model case for the democratization of a country through occupation. Fast himself was born in Jerusalem and currently lives and works in Berlin, but his art explores how the plethora of information produced by our global society inevitably strains every artist’s capacity to ‘mediate’ that information and assimilate it into his or her work. (De Palma’s subversively ironic take is the – possibly even more radical – answer to this challenge, approached from the opposite end of the spectrum.)
A second work on display (also shown in Vienna) was a single-channel video called De grote boodschap (The Big Message, 2007). While the language in which it is spoken (Flemish) renders the piece intensely local, it is nonetheless universal in its contemplation of how daily television soap operas have become a global phenomenon. In this 27-minute loop the stories of the four main characters unfold on a series of room sets that all seem to belong to the same apartment building: a flight attendant returns home from work, an old lady reminisces about the war, the old lady’s young black carer and her moody boyfriend engage in post-coital conversation. The camera looks into these scenes like a fly on the fourth wall. Since we never get to see the whole story, the narrative gaps leave room for speculation: why would the new tenant from the Middle East want to pay his rent in cash, and for six months in advance? We can improvise an answer, until we get a real one… What the two works on display have in common is an uncanny notion of permeability, and paranoia. In times of (a war on) terror there is no such thing as the safety of your own four walls, or even your own mind.