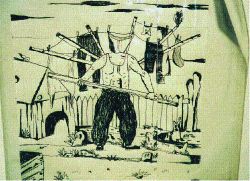 The mammoth retrospective that was 'Organizing Freedom' took its title from the lyrics of Björk's song 'Homogenic' (1997): 'thought I could organize freedom, how Scandinavian of me!'. Over the last decade a playful, full flowering of the art scene has resulted in the so-called 'Nordic Miracle' generation, who have become the most widely exhibited group of Scandinavian artists in history.

'Organizing Freedom' illustrated how such a cornucopia in the northern climes came to be, and why it happened in the 1990s. Scandinavia has enjoyed relatively good government arts funding over the past 50 years. Given such an atmosphere of organized support for artistic pursuit, the legitimacy of new media has never really been a point of contention (in fact, there's only one painter featured in the show, Tal R). The artists in 'Organizing Freedom' seemed to have embraced an approach to new media as if it came naturally to them. The look and feel of the show, as a whole, resisted Nordic stereotypes - it was picaresque and peppered with charismatic personalities, even at their most self-involved. These included slap-stick artist Peter Land, the Archimedean Olafur Eliasson and the digital Protean-princess Vibeke Tandberg.

Beyond the off-kilter pizzazz of the artists themselves, however, there was an emphasis on the 'interpersonal' that coursed through even the most conceptual pieces. Gitte Villesen uses her video camera to observe the relationships between men and women, the young and old. Although Vorbasse Horse Fair and Market (1994) was originally intended to document a country fair, along the way she accidentally met a drunk young man who persistently chatted her up and so she ended up filming the ensuing subtle, ridiculous games that men and women so often play. Swedish artist Elin Wikström explored the 'interpersonal' by documenting straightforward game-playing and storytelling. In Gen Girls Removed from Box; Barbie Videoing Michelle, Chelsie and Lara! Tori Performing for Barbie and Michelle! Ana in the Swim Meet! (1999), Wikström videoed the stories that emerged when adults played with a group of Barbie dolls.

The show made apparent that issues of gender and sexuality were central to the explorations of many Nordic artists in the 1990s. This was evident in Peter Land's well-known video diaries from 1994, in which, for example, he hired strippers then drunkenly stripped himself in order to assuage his guilt. For her installation Warte Mal! (1999) Ann-Sofi Sidén arranged a series of booths that recalled peep-shows, in which she broadcast eight interviews with prostitutes, pimps and police, all of whom related seamy anecdotes about sex-for-sale in a post-Communist town on the border between the Czech Republic and Germany. Finnish artist Fanni Niemi-Junkola humorously paired sexually suggestive imagery with grotesque folkloric approaches to the female body. In her video Giants (1998) two hefty women wrestle with biting and hair-pulling intensity on a cliff in Scandinavia. Their yells and moans are slowed down to sound like those of lumbering behemoths.

For lovers of humanist new media art 'Organizing Freedom' was hog heaven. There was a maverick element in the very air of the exhibition hall that resonated beyond the Scandinavian art context: the music of Björk, nature, irreverent sexual despair and long, long nights.