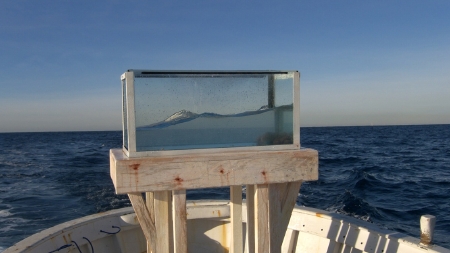 ‘Outlandish are the bodies: they are made of the outside, of the extraneitas that forms the outsider’s outsidiness…’
The first line of Jean-Luc Nancy’s ‘libretto’ for Outlandish

Phillip Warnell begins his short film, Outlandish: Strange Foreign Bodies (2010), with a cinematic image of the sea – a greying Mediterranean that stretches toward the horizon, above which heavy nimbus clouds appear ready to burst open in a mid-day shower. To the right of the screen, a volcanic mass juts from beneath the ocean’s surface, revealing a small island shaped much like a pumice stone – a tourist’s hideaway, perhaps, or a monastic sanctuary. The landscape, tinted in becalming pastels and high-definition aquamarine, suggests a placid environment on the verge of great turmoil. If Warnell’s mise-en-scène seems to bear a striking likeness to the fabled island shots in Michelangelo Antonioni’s L’avventura (1960), it is likely not coincidence. For much as the paradigmatic Italian art film used littoral space as a semiological and architectonic conduit for traversing the boundaries of the Étranges and the Étrangers, Outlandish’s camera eye translates the swirling atmospheres of the ocean into a fluid subject, a foreign skin, an interzone of sorts in which to theorize the body and its relation to the ‘outside’ unknown.

Warnell’s muse and working partner in this cinematic treatise is none other than French post-structural phenomenologist Jean-Luc Nancy, whose intimate confessional essay ‘L’intrus’ (The Intruder, 2000) – detailing his heart-transplant – serves as the textual inspiration for Outlandish. Equally influenced by late Heidegger, Merleau-Ponty and Augustine as much as his agnostic contemporaries, Derrida and Foucault, Nancy extruded a religious hermeneutics from the post-’68 discourses on libidinalism and alterity, returning the body from chimerical semiosis to an existential corporality. Nancy’s first appearance in the film is via audio-track, where he intones a kind of biomorphic poetry over images of an abandoned skiff that tosses and turns along the shoreline. The only living creature in the frame is an octopus, who, contained in a crudely erected aquarium near the boat’s stern, sloshes in step to the tides below.

Cut to… Monsieur Nancy sitting before a vast panoply of books in his home in Strasbourg. A slight figure with dark features, bald scalp and piercing eyes, he resembles none other than Foucault, whose striking image was also bound up with personal narratives of illness and survival. Nancy’s public battle with heart failure and cancer was documented in much of his own work throughout the 1990s, and his monologue in Outlandish mines similar, anatomical territory, cross-cut with surgical video of an organ – presumably a heart – as it is prepped for implantation. ‘We call “a foreign body” any kind of object, piece, part or substance,’ Nancy explains, ‘to which the “foreign body” cannot be subjected. A concrete girder is a foreign body in a forest; a metal tambour is one in a river. But the canonical example that is always given is a needle or a piece of glass accidentally swallowed, or better yet, a surgical instrument left inside after the incision has been sewn up.’ For all of his lecturing, Nancy’s appearance is not only magisterial, it is also surprisingly playful, as when he suddenly vanishes from his desk in a Mélièsian truc d’arrêt yet continues to monologue, or when a pile of Möbius strips causes him to grin like a school-boy.

The clinical sequences are detailed but not obtrusive, focusing on the metered movement of fluids and plasma, saturated muscle wriggling between silvery clamps, and the delicate rubber touch of gloved hands. While it’s difficult to pinpoint, there is something about these ‘interstitial’ images that evokes the aquatic, or, more precisely, the experience of submerging beneath it – skin mixing with fluid, surfaces opening suddenly into darkness, opening from outside to inside (…to outside). Superficial beauty suddenly gives way to a mysterious depth that is, in truth, all surface. The works of Jean Painlevé and Jean Vigo are the exemplars of this secret underwater cinema, whether in the floating hippocampi of The Vampire (1945) or the diving bargeman of L’Atalante (1934). ‘To take the plunge and gaze from beneath [the ocean’s] waterlines is fraught with danger,’ Warnell explains in the textual companion to the film. ‘Once within its volume, a diver experiences a medium of murky transparency, a flow of aqua that has defined the evolution of startling, extraordinary life-forms. In this drowned world, wrecks and mythical references emerge, the strike of bells from the deep. The oceans drift, suck, pull, swell, recede, flood and spread, its creatures responding with feats of bioluminescence, traps, symbiosis and speed.’ The heart, removed from its arterial chamber, is little different from the squid flagellating in its artificial vitrine, a being whose insided-ness is suddenly ‘excoriated’, dispirited, thus revealing itself as an outsider, an outside, a creature without shelter, a body which only embodies.

Nancy concurs: ‘Swimming body is fin, wing and shining scale, becomes stream and body of water, becomes algae and blue-green brightness […] Each time body is other and another than the same it is in all its avatars, in all its divine metamorphoses according to which it is its own guest, an angel or a demon arrived from the remotest elsewhere. Body is coming in itself of the unknown, irruption and intrusion of other bodies, ingestions, intujuiceptions, incarnations, encounters and gratitudes, repulsions and rejections. Body is great beat of foreign bodies, inspired and expired, gasped, swallowed and spat.’

Now the camera plunges into the water and captures the translucent spume and the ripples of light dancing on the surface – the world has become an aquacade, the eye a prancing squid. The skiff lumbers across the frame on its directionless journey. Is this being-in-the world, or possibly being-in-the-sea? Is this the ‘outside’? Nancy sums up the mystery beautifully: ‘It is east and west, zenith and nadir, sharing and crossing, regions of air, a stranger to end in the world whose secret it takes with it – each body coiled up, deployed in world secret.’ Despite its heavy intertextuality, Outlandish remains a fundamentally sensorial experience, attuned to the infinitesimal modulations in atmosphere, which the body, infinitely turned toward the outside – and thus being – encounters infinitely. It is, simultaneously, a loving portrait of France’s most perceptive, most sensitive philosopher, whose world, or worlding – used in the Heideggerian sense – is a torrent of creativity, ecstasy and Étranges. That Warnell is able to descend artfully into both corpi makes him one of the fearless divers of the deep. Outlandish: Strange Foreign Bodies, with texts by Jean-Luc Nancy, Andrea Lisson and Phillip Warnell, is available from the South London Gallery.