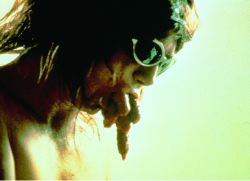 In a recent public conversation between Allan Kaprow and Paul McCarthy the latter mentioned that they had been discussing the connections between the raised arm of the mannequin holding the 'illuminating gas' in Duchamp's Etant donnés (c. 1946-66) and the Statue of Liberty, another figure holding up a flaming torch. Trafficking in some yet-to-be-determined Franco-American idea of the feminine, both figures - as much phantasms and representations of abstract ideas (liberty, desire) as bodies - become sites of governmental, linguistic and economo-libidinal exchange and loss, signifying what in part comes to be considered anyone's identity.

This anecdote demonstrates, in brief, the intelligence and melancholia of McCarthy's investigations, which, I realise, may not be the first qualities that spring to mind when thinking about his work. The formal decision-making and much of the actual content of the artist's work don't merely signify but bluntly, brutally and beautifully perform the complicated visceral relation between thinking through and about the body, and embodying thinking. Mind-expanding and enthralling, handsomely installed and proving McCarthy's significance, this travelling retrospective was organised by Lisa Phillips and Dan Cameron. In its LA installation, however, it felt truncated and weirdly cramped: it excluded (except in the catalogue) too much of the artist's recent work, the crucial Rear View (1991) for example, and many of his spectacular large pieces, such as Mechanized Chalet (1999).

Much has been written about the taboo-breaking, mess-making, desublimation techniques in McCarthy's work - and I don't want, even for a second, to appear to dismiss or patronise breaking taboos, making mess or desublimating the chaotic psychic intensities of aggression, power, violence and pleasure which pass under the family name of Desire (or perhaps that should be the desired name of Family). But when you consider how much of McCarthy's work investigates basic but difficult concepts (difference and repetition, mediation and cultural production) or how in Heidi (1992) - McCarthy's still overwhelming collaboration with Mike Kelley - one of the sentences Heidi is taught to read is 'The white cube ejected the sick girl for getting ornamented with anti-ornament', it might be time to consider how the artist's work deranges as well as rearranges what constitutes art-making and thinking - how the body's physical facts and its representations are as enigmatic as the most abstruse ideas coordinating its consciousness.

Duchamp discerned, as Thierry de Duve has made clear, that once painters stopped grinding their own pigment, all painting became a ready-made. Kaprow understood the radical promise in Pollock's 'near destruction' of the tradition of painting. As he tests the limits of the performance called selfhood, part of McCarthy's project has been to challenge not only the ramifications of the readymade, but what painting is and cannot be. This is especially evident in his delirious use of ketchup and chocolate in Picabia Love Bed, Dream Bed (1999), Whipping a Wall and a Window with Paint (1974), and various other 'paintings' made with his face, head, shoulders and sliding body. All these works reactivate the actionism of action painting - with specific nods to Picasso painting for the TV camera, and to Hans Namuth aiming his camera up through a sheet of glass to follow Pollock's dripping.

McCarthy has reiterated that 'there's a big difference between ketchup and blood'. Of course, there's just as big a difference between a dummy, mannequin or doll, and a human being. But how and why does one invoke the other and can the referential impact be throttled? In a media-saturated society can anything be or remain only what it is? The Painter (1995) is a brilliant interrogation of the senility and late paintings of Willem de Kooning, complete with collectors and dealers puppet-mastering around him. It's a video deploying, as so many of his videos do, the mise-en-scène of instructional television (from the Galloping Gourmet to Martha Stewart), but one in which the painter mumbles and cries: 'You can't do it anymore you can't do it anymore.' And later: 'I can't do this anymore.' He means painting, he means art-making, he may mean life. At the end of The Painter the artist gets up on a table, pulls down his pants and a collector with a protuberant fake nose sniffs at his bare arse, McCarthy's own. In Heidi the Peter character bares a fake, plastic butt while he spies on his father. So, what is the difference between Peter's fake butt and McCarthy's actual one? How does the artist equal the strange fucked-up nature of the always proliferating stuff already in the world (fake butts, masks, Evil Dead II)?

The drawings for The Garden (1991-92) are punctuated with phrases: 'the garden of apparent pleasure', 'plastic representation' and 'void of apparent appearance'. See the 'parent' in apparent, dwelling in appearance. Much of The Garden's sad woods was created from abandoned sets from the television series Bonanza. The fake trees resemble trees, until they don't, stopping abruptly, like columns from an imitation, varnished Parthenon. Verisimilitude - does it only have to go so far or can it only go so far? How and why is there a human willingness to complete it, believe it, make more of it? While thinking very hard about the porous, seeping wetness of the body, the psychic disarray of masculinity and its traditional intimacies, McCarthy examines, wildly, ribaldly, the formal, ideological and architectonic effects that construct them, mediating them into the real and beyond.