BY Douglas Heingartner in Reviews | 12 APR 05 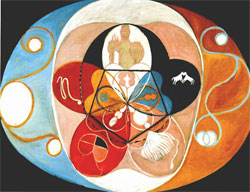 The title of this exhibition, ‘Pawel & Vincent’, was a reference to the art prize (nicknamed ‘The Vincent’) that the Bonnefanten Museum recently began awarding in a bid to become a kind of Turner or Hugo Boss Prize for Europe. But as well as being the most recent winner of that award, Pawel Althamer can also be linked with Van Gogh through a shared interest in extremes and margins, as this retrospective revealed most theatrically in Althamer’s Sogenannte Wellen und andere Phänomene des Geistes (So-called Waves and Other Phenomena of the Mind, 2003), an eight-screen video installation of short films (made with Artur Zmijewski) that chronicle the artist’s adventures with peyote, LSD, magic mushrooms, truth serum, hypnosis and other mind-altering phenomena.
Althamer describes his drug-related experiences in great detail, striving for the accuracy of a scientist charting the borders of perception, noting the most minute facets of the wondrous stimuli around him. Artists such as Vito Acconci and Marina Abramovic covered similar ground decades ago, however, and Francis Alÿs did so as recently as 1996 with his Narcotourism, in which he too tirelessly wandered among the crowds under the influence of powerful elixirs. But the videos Althamer and Zmijewski have produced are less harrowing and can even be said to have a disarming or democratizing effect by showing that an artist’s tripped-out observations are not necessarily any more profound than anyone else’s. (‘Look at your palm,’ he muses at one point in the video LSD, 2003, ‘you can see several layers at once.’)
In fact, the unspectacular receives special attention throughout ‘Pawel & Vincent’. Another video project (Blokers, 2004) follows a dozen teenagers (including two of Althamer’s own sons) as they travel from a dreary Polish suburb to spend ten days in ‘Paradise’ – Althamer’s name for Maastricht – to take part in a series of workshops held in the museum’s vestibule. The vestiges of their involvement can be seen in the sea of graffiti that now covers the hall’s walls and floors. Their tags, like those of most of their peers, are largely unexceptional, the most interesting aspect probably being the revelation that Polish taggers, too, revel in skull cartoons and ubiquitous youth slogans such as ‘Fuck the Police’. And the video documentation of their journey to this ‘Paradise’ is for the most part equally unexceptional; the safety instruction routines on Polish aeroplanes are no more interesting than those anywhere else.
Althamer has a soft spot for the marginalized – drug users, the homeless, small children, the elderly – and incorporates them into many of the public performances he stages, which often feature hired actors and locals together concocting wide-ranging and sometimes barely perceptible street interventions. Many of the performances also include Althamer himself, acting the role of outsider while at the same time grabbing the limelight; in Documenta 10, for example, he converted an army truck into a two-person cinema that tracked the artist as he wandered through Kassel in a space suit (Astronaut, 1995), and more recently he occupied a tree house by the gates of the Venice Biennale (The Tree House, 2001).
Althamer’s fondness for highlighting the peripheral is also evident in the figurative sculptures on show here, which range from business drones draped in military paraphernalia to the doll’s-house figures of the Foksal Gallery Foundation (2001), a pool-table sized scale model of the Polish exhibition space that depicts it as an aspirational, though ultimately generic, office environment populated by culture industry functionaries straight from central casting, with their stubble, black clothes and designer spectacles, as they busily confer on miniature photographs. But here, too, one of the figures stands apart from the main group, smoking as he stares out the window. And by fitting wheels onto the table, Althamer emphasizes the outsider role that Poland (and Eastern Europe generally) still plays on the periphery of the global art industry.
The dozen or so life-size sculptures here are equally marginal, on the cusp between real and fake; built of organic materials such as hay and grass stuffed into pigs’ bladders, they look like primate cavemen lost on the edge of a changing world. Yet it is in such areas, Althamer shows, that many of art’s and life’s greatest treasures may be found, in something as fleeting as a spider’s web seen under the influence of psychedelic mushrooms. And the catalyst for such experiences need not be anything as conspicuous as a Mexican dope adventure or the chaperoned madness of a graffiti free-for-all in a sober museum. The title of the video Weronika (2004), for example, refers not to a little-known Polish weed but to the artist’s daughter, who accompanies a presumably drug-free Althamer on a walk through a local park. The Sublime can also be found among the minutiae of everyday life.