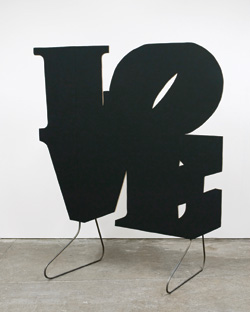 Despite his projects based on plant communication, aura photography or the spiritual power of circles, you would be wrong to assume that Peter Coffin is some kind of mystic. His attraction to New Age beliefs and practices, like his amateur interest in physics or art history, is one born both of intense curiosity and scepticism. Where artists such as Mungo Thompson or Corey McCorkle deploy New Age material to Conceptual ends, Coffin favours the visual residue of do-it-yourself spirituality. He embraces complex ideas that lend themselves to clumsy visualizations which humanize their coded beauty, like a jet plane tied into a knot, as in Untitled (Bird in Space) (2003) – the result of Coffin pondering the notion that things moving fast enough change shape. His aura portraits (2002–ongoing), photographs taken with a specially equipped camera, strip away his subjects and leave only a coloured haze on a white background.

Such conflations between disparate models of the world – abstraction, say, and mysticism – are at the heart of Coffin’s practice. For Untitled (Rainbow) (2005) he created a spiral of 30 postcard images of rainbows, as if they were all one continuous stream of light emanating from a single source. The spiral happens to be the oldest symbol used to depict the sun and, of course, also a prominent feature in the work of Robert Smithson and Mario Merz. But beware. Sometimes the artist’s mash-ups are red herrings, as with the photographs he has made of certain pairings of images from magazines, in which he intends no greater meaning than whatever drew him to the pictures in the first place. Indeed, the very lack of correspondence between things – like a Constantin Brancusi sculpture and a cocktail advertisement in Untitled (Bird in Space, Tropical Drink) (2003) for instance – can be Coffin’s point. And yet by using Brancusi’s knotted ‘Bird in Space’ sculpture – with its associations to a then contemporary prevailing theory of physics and even to the 1980 spoof disaster-movie Airplane! – Coffin lampoons the self-congratulation of both high Modernism and science, when not leading us astray.

This makes Coffin’s work sound complicated or snide, which it most emphatically is not. His facility with the dumbness of things allows him to turn familiar subjects over and over in his hands, tying them to other things, attempting to see them differently in an effort to recover and understand the power they wield over him. At one point, for example, Coffin found himself enamoured of models of the universe but had trouble picturing them in his mind; Untitled (Log with Model of the Universe) (2005) was the result. He had read that three dimensions can be represented by a tube, the fourth dimension as a torus. Coffin’s Log consists of little more than a hollowed trunk housing a multicoloured party light, which plays the role of that impossible fourth dimension. The light is made by two spheres that spin in opposite directions on one axis; the path of the light outlines the torus shape of a doughnut.

Coffin’s aura portraits betray his suspicion that photographs capture the essence of their subject – even if that subject is an art work. For Untitled (Imprints) (2005) he made Silly Putty transfers of images from art history books, from Joseph Kosuth to Leonardo da Vinci, and photographed the imprinted pink gunk. At the time, he was thinking about how images are transposed onto our brains and made to stick, a concern that recalls something Albert Camus wrote in a preface to an edition of his essays: ‘A man’s work is nothing but this slow trek to rediscover, through the detours of art, those two or three great and simple images in whose presence his heart first opened.’

Earlier this year Coffin performed a variation on this slow trek, filling a room with over 40 silhouette cut-outs of sculptural icons such as Robert Indiana’s LOVE (1966), an Easter Island head and a Jeff Koons inflatable bunny. A video at the far end of the gallery featured stock footage of landscapes from the air. Coffin’s hope was that visitors would choose certain of his ‘props’ and put them in the way of the projection so that they would appear as floating shadows over the countryside – silhouettes of silhouettes of images, doubly liberated from whatever their contexts once were. The implicit suggestion is that we need to vanquish and forget the meanings of things in order to remember them. Or is this not about remembrance and understanding at all, but rather about belief?

Bruce Nauman described his famous The True Artist Helps the World by Revealing Mystic Truths (Window or Wall Sign) (1967) – a work that is the source for two Coffin pieces – as ‘a totally silly idea and yet… I believed it.’ No matter that Minimalism and mysticism have found themselves bedmates before. One gets the sense that Coffin feels he ought to believe in some silly things, such as the afterlife or multiple dimensions, never mind find faith in his attraction to Gian Lorenzo Bernini or even Nauman; those images that somehow keep sticking in his mind. But from that frustrated ambivalence arises Coffin’s own invaluably redundant prophecy (one hardly mystical but certainly true), a platitude so obvious as barely to merit revelation: the visible world is mysterious enough, and it’s plenty hard just to believe your eyes.