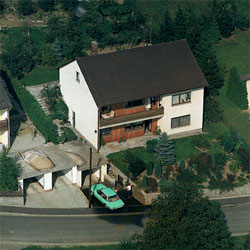 A long row of square black and white photographs ofnothing but bus stops: some of them simple concrete slabs, some with corrugated iron roofs, some like garden sheds, a few with brick arches, others made of timber and encrusted with posters. Despite the echoes of Bernd and Hilla Becher, everything is different: the neutralizing perfection is missing, the weather is even worse and the empty roadside shelters feel staged, as if a single photograph could capture the sadness of youth in the provinces. For Peter Piller also sees the subjects of the Bushaltestellen series (Bus Stops, 1990–92) as village centres: places where people go to meet, where people wait to get away.
On the opposite wall were small-format colour images of forsythias in bloom, repeated over and over. Piller spent one spring collecting them for Forsythienblüte (Forsythia Blossoms, 1994), which shows the bright yellow-flowered shrubs against grey rendering, enlivening rubbish bins and lining lonely street corners. It seems that concrete is the natural habitat for these scraggy, forlorn bushes. Their solitude is topped only by the pullovers, hats and jackets that Piller has found: tangled up in branches, lying in puddles, stretched out on the muddy ground. Dirty, wet and washed out, they resemble pictures from the scene of a crime, clues to as yet unknown atrocities. The way these Fundstücke (Found Objects, 1995–2004) are hung, there is space left in the bottom row, as if for future graves in a cemetery, and one finds oneself hoping that this is a just a reference to people having lost objects, not their lives.
Piller’s one-man exhibition at the Museum für Gegenwartskunst highlighted his work as a photographer, which is significant because he is known above all for his work with existing pictures found in archives: he. works three days a week for the Carat media agency, combing the announcements pages of regional papers from the Magdeburger Volksstimme to the Süderländer Volksfreund. Among the standard fare of local reporting there is not much room for quality photojournalism: awards ceremonies, land offered for building development, and anniversaries are documented by semi-professional photographers at best, and there are occasions, such as award ceremonies and car launches, whose original meaning and purpose have entirely dissolved into the ‘photo opportunity’. Piller finds these and files them away in folders with names such as: ‘Weapons Used’, ‘Inaugural Ribbons’, ‘Eyesore and Joy to Behold’. For some years now Revolver-Verlag has been publishing these collections as A5-format catalogues bound in grey – more than 20 further volumes are planned. In the second room of the museum Piller has made a selection from his archive, filling an entire wall with poster-size inkjet prints of grainy newspaper images enlarged up to 100 times. The hanging is slightly reminiscent of Wolfgang Tillmans – but this time the absurd, idiosyncratic aura exuded by firemen photographed with too much flash and a 100-year-old woman adds up to a panorama of life not in urban environments but specifically in the German provinces.
In the next room Piller presents two of his collections of found material as series: a batch of aerial photographs of German owner-occupied homes – pictures that were supposed to be flogged to the proud house owners at a later date by door-to-door salesmen – and colourful pictures of missiles and projectiles that were apparently offered for sale on eBay. An eerie mixture: while from above the houses all look alike – Piller sorts them according to poetic-sounding but highly formal categories such as ‘Sleeping Houses’ (with closed shutters) or ‘Red Tongues’ (where bright red bedding has been hung out to air) – inside, a puzzling anti-culture seems to reign: the small metal rockets, probably packed with explosives, lie regally on decorative cushions and flowery velour carpets, or take their place on the mantelpiece between porcelain figures like sports trophies. The juxtaposition suggests an alien suburban world, both banal and dangerous. These photographic ready-mades taken from commercial contexts are slightly reminiscent of Martin Parr’s pictures taken in suburban homes or the amateur photos that Hans-Peter Feldmann has been collecting from flea markets for decades, but they are less voyeuristic. It is their commercial utility value and their barely veiled triviality that prevents these pictures from being essays in cultural criticism.
Piller, the collector who works at an agency to pay the bills, deliberately avoids the significant, tell-tale motifs of advanced corporate communication – which distinguishes him from fellow image recyclers such as Richard Prince, who deliberately plunder the glamour and seduction of advertising for their work. Which is why this reluctant office worker can finally also take the office as his theme – the catalogue he produced with the prize money from the Rubens Prize of the City of Siegen looks from the outside like a file; it contains a pad of paper, each page bearing the logo of his employer, the Carat agency. Every page is full of little sketches of the corridors, caricatures of co-workers, letters in wobbly typescript, scrawled daydreams and ‘office dialogues’ in handwritten capitals: ‘OK, I’M OUT OF HERE – GOOD’.