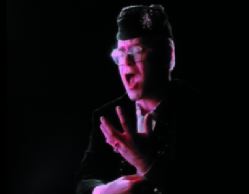 Philip Brophy is a bit of an avant-pop star in contemporary Australian art. He embodies the traces of a post-Punk scene in Melbourne that included figures such as Nick Cave; was an early contributor to 'new wave' journals like Art & Text; produced a string of underground records; and then made cheap horror films. Now mostly known as a composer and performer, he also writes smart, wildly opinionated essays on sound design and film scores.

Brophy's recent surround-sound performance featured the first of two parts that make up Evaporated Music (2000), a work which comprises six sonically refashioned video clips of Pop icons. Carefully selected - with all the loathing of a discriminating fan - the first three songs are by Elton John, Phil Collins, and Billy Joel (a future plan is to feature female artists such as Mariah Carey). Projected large on the wall, the original visual component of these videos is unchanged, but their audio is completely overhauled.

The songs' melodies are removed, and the singers' voices are replaced by Brophy's own Darth Vader-like drool, thus encoding his own presence (and absence) into the work. Each has its own intimate mood, and to this extent, emanates the perverse auto-erotism of a ventriloquist - an investigation of what happens when the larynx is contorted, constricted and controlled.

Brophy has painstakingly re-synchronised the incidental sounds of the video clips. Footsteps, newspapers and ice blocks are now recast as swirling, cracking and crushingly metallic techno elements, disorienting our psycho-acoustic understanding of the video space. Visceral, intense, and claustrophobic, the overall effect is pretty hilarious. That Brophy loves the stuff that annoys him is obvious, and part of the pleasure of his work is the clear delight he takes in re-appropriating the degraded sentimentality of the commercial Pop promo. His press release enticingly describes his subjects 'drained of all excess and tawdry humanist bile, their bald and bloated bodies hollow, their music evaporated into surround-sound air'.

Beyond spleen venting, Evaporated Music explores the premise that no sound exists without its spatial, material supports. The piece revels in the active mis-recognition of sonic referents, as when an acoustic imbalance is struck by certain elements appearing far louder or softer than expected. However, Brophy's approach is not so much directed at sound's obvious artifice, or an 1980s-style deconstruction, as the possibilities of digital sampling and Techno's ungainly deconstruction of live presence.

Colonising the prison of synchronous sound so native to video, Brophy plays noise against images, exposing them to the elaborate mime scenarios which they really are. Divorced from their subordination to the soundtrack, the images return to a more polysemous state - no longer middle-aged fantasies used to advertise a song, but a sequence of rapidly cut, uncanny spectres. Above all, these are three weird and fleshy musical portraits of Elton, Phil and Billy. Removed from comfortable domestic consumption, Joel's generational nostalgia appears all the more ridiculous, and a father-daughter caress becomes disconcerting. As with so much of Brophy's work, families and their bodies become sites of repressed urges and potential trauma.

Like the more directly political strand of video art known as 'scratch video', which took popular TV forms as the basis for image piracy and semantic inversion, Brophy maps popular culture by reinscribing it. But these are very specific transactions, and each seems finally a protest against the boredom of stereotypes. Sensation is what is at stake. Thus, enjoying his captive audience after the recent eardrum-crushing performance, before the audience had regained its composure, Brophy subjected us to his ventral clamour a second time.