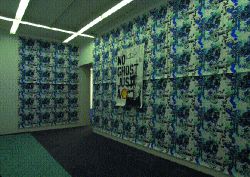 Some exhibitions make you feel like a voyeur, others like you're returning to a long lost home. Sometimes they make you feel like a spectator or a guest passing through a 'designed' space. This was the strange feeling evoked by Philippe Parreno's recent show 'One Thousand Pictures Falling from One Thousand Walls'. Perhaps it was the wall-to-wall carpet, installed by the artist, which functioned like a guide and muffled the sounds of your footsteps.

Starting at one edge of the first room, a light blue line woven into the carpet indicated the direction the viewer should take. Of course, such a strategy is not new. In 1938, for example, Herbert Bayer, who curated a show on the German Bauhaus at the Museum of Modern Art in New York, attempted to foreground the itinerant nature of exhibition visitors by having footsteps printed onto the gallery floor to direct the audience through the space. Since 1938, however, a lot of things have changed. Bayer's footsteps circled around objects and seemed to indicate very clearly that even if there was a centrifugal force driving the spectator he or she would always wander to and fro. Parreno's carpet functions in a very different way, as if time's arrow were following a loop.

On some levels the show was about disenchantment. In this perfectly still, choreographed bubble of an exhibition you could watch three videos, all of which explored what it means to live in a post-utopian world. In the first projection, Anywhere out of this World (1999), a Manga character, Annlee (bought cheaply from a Japanese animation company), talks about her status as a commodity, and states how she was never meant to have a story of her own. An almost romantic attempt to rescue a lost character from oblivion becomes a somewhat uncanny dissertation on the predatory nature of the spectacle.

The second video, Credits (2000), centred around an apocryphal story of utopian Modernism in France. Many housing projects built in the 1960s were left empty, which prompted the government to turn the vacant and muddy spaces surrounding them into fields and parks. As trees were planted, a favourite pastime for kids was to attach plastic bags to their branches and watch them being torn off by the wind. The film is a fixed shot of such a building, with trees covered in brightly coloured plastic bags in the foreground. Nothing happens, except the light gradually changes to the sound of a distorted guitar. As the film ended, the light in the gallery came on to reveal a photograph of a young boy by Inez van Lamsweerde, which functioned as the film's title sequence. On the wall at the entrance of the projection room was a label that listed, in place of a title, the names of all the people who had influenced the creation of the image: from ministers in charge of housing at the time of the estate's inception to the people involved with the shooting of the film itself. The automatic timer mechanism and the long list of names reinforced the feeling of a totally enclosed space, while the projection screen built flush inside the wall played the part of a horizontal window reflecting back towards the interior, hushed world of the exhibition.

Vicinnato 2 (2000), the last video in the show, was made in collaboration with Liam Gillick, Douglas Gordon, Carsten Holler, Pierre Huyghe and Rirkrit Tiravanija. It depicts a group of friends gathered on a hill above a city by the sea. They talk about nothing and everything, but the discussion constantly returns to their paralysis in the face of political engagement and to the impossibility of imagining alternatives to capitalism.

Parreno once commented that we sit in front of stories like a player without a joystick'. Pushing the sliding door on the side of the screen where Vicinnato 2 played, you experienced a very similar feeling: instead of leading to an exit, it led you back to the first room once again, to the beginning of the loop.