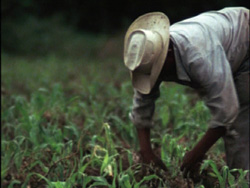 Composer and filmmaker Phill Niblock does not shy away from the ‘Minimalist’ tag, but he is rarely to be found sharing shelf-space with the other American composers of his generation. While today’s laptop acts and DJs cite Steve Reich’s tape loops as an inspiration and Philip Glass’ influence can be detected in the scores to most of Hollywood’s current output, Niblock is all about motor bikes and noise: ‘In the mid-1960s I was riding a two-stroke Yamaha motor cycle up a long mountain slope in the Carolinas, stuck behind a diesel engine truck […] the revolutions of our respective engines came to a nearly harmonic coincidence […] that put me in such a trance.’ The mesmeric effect that the septuagenarian artist happened on is created by an individual’s location in relation to separate sound sources and becomes more prominent when tones pulse against one another in a given performance space. The Movement of People Working (1973–91) consists of a huge amount of footage that Niblock shot, almost continuously, from 1973 until 1991, in different locations around the world. On 12 screens, hung three to a wall and each showing a different scene, the film follows the endlessly various shapes of people engaged in different forms of tough manual labour. The waiters that pass through Sketch’s gallery from Pierre Gagnaire’s kitchen don’t stop to look up.

Niblock’s well-known black and white short The Magic Sun (1966–8) was made in collaboration with the Sun Ra Solar Arkestra and for some years was projected behind the band at their gigs. However, in 1973, as a means of overcoming the expense of using dancers in live performances, Niblock began to perform his own compositions simultaneously with his films. Sketch’s multiple screens display an overwhelming rhythm of repeated human activity: the rapid oscillation of a hammer hitting an anvil playing opposite or next to the slow movement of a plough being dragged, or the stillness of figures fishing from a raft. Niblock has referred to his films as choreographed dance, and in the substitution of live dancer for filmed worker an eerie sense of this uneasy exchange remains. For these visual polyrhythms are effectively random and almost infinite: a computer programme decides the order in which the footage is played.

The music that accompanies (or is accompanied by) the films is also governed by an aesthetic of elimination and ghostly presence. While Niblock’s process of composition removes melody and typical harmonic structure, the latter still exists in some spectral sense, though it is always fragile. Frequencies are scored at one-Hz intervals, so that the almost undetectable shifts of density and tone threaten to tear the sound apart, colliding to create what Niblock calls ‘virtually pure distortion’. The paradox of Niblock’s status as a Minimalist composer is just how maximal this music sounds, relying on forceful compression over any scything-away of extraneous elements.

Niblock’s recording technique involves elements of both of these processes. He begins by recording a musician playing specific frequencies, which he then edits to remove breathing spaces, before finally multi-tracking them into a dense, gradually evolving drone. Within this, microtones flicker and collide, generating tones that are not present on the actual recording but which are shaped by the performance space, the patterns of acoustic interference becoming more prominent at higher volumes. In Sketch, however, the amplification falls short; as a succinct note in the comments book says, ‘this needs to be LOUDER’. The subtleties of this immersive drone music are usually revealed only at high volume, but here the recording is closer to an irritating backing track. The compulsion to explore the potential acoustic oddities of the space is diminished, as the subtle aural effects and hallucinations that Niblock’s compositions are intended to create are never completely realized.

Just as necessity dictated Niblock’s move from live performance to film, so the shooting process of The Movement of People Working was limited by the amount of film stock that the artist could travel with. Because of this, there is little or no evolution in the range of footage that the exhibition comprises, from the earliest films to those shot almost 20 years later. This creates an evenness of colour and a blissful stasis, the camera remaining always at some distance from the subject. What does vary, however, is the picture quality, the continuous nature of the project marked by the deterioration of the celluloid itself. In some sections the black marks of eroded film flicker constantly, partially obscuring the subject. Although Niblock rejects any direct correlation between his films and his music, in performance both are marked with age and absence. The greater absence felt at Sketch, however, is of the visceral impact that Niblock intended his grand project to have.