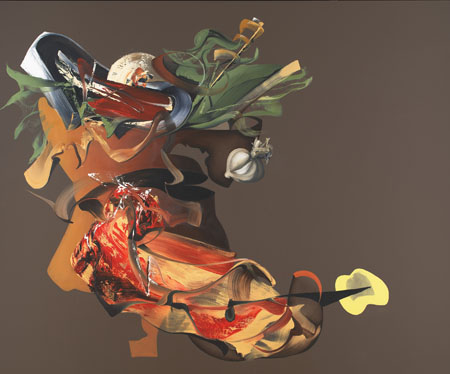 Pieter Schoolwerth’s latest exhibition, ‘Portraits of Paintings’, represented an engagement with historical paintings that took the artist away from his Pop-Surrealist works of the 1990s and early 2000s and towards a more cerebral, deconstructive style that explores the technical and rhetorical aspects of the medium. The works shown at Miguel Abreu Gallery comprised reworkings and studies of European masterpieces from the 17th to 19th centuries by figures such as Jacob van Ruisdael, Gaspari Traversi and Eugène Delacroix. In each, Schoolwerth highlighted issues of materiality, gesture and figure/ground relationships in distinct ways.
The large-scale Portrait of ‘The Sitting’ (After Traversi) (all works 2010) hung on the left as you entered the gallery; it cued viewers to the historical and analytical tenor of the show by riffing on Traversi’s 1754 depiction of a draughtsman sketching a young woman’s portrait. The original composition, which was filled with spectators watching the artist work, has been largely evacuated. Instead Schoolwerth superimposes the sitter (a young woman in the background) and the artist alongside and over one another and across a lush brown ground. The latter is neither the neutral white ground of modern abstraction nor the deep black shadows that often frame classical European figures; rather, its earthy materiality of bodies, pigments and views interrupting one another suggest the space of the artist’s conceptual atelier.
In Drawing for Portrait of ‘Women of Algiers’ (After Delacroix), a small composition of marker pen on overlaid acetates that shows the viewer how each ‘portrait’ is built from a number of tracings and drawings that are simultaneously ‘after’ the original and depart from it entirely, even as they constitute a record of an artistic encounter and process. The very large Portrait of ‘Still Life With Beef, Bowl of Ham and Vegetables, and Receptacles’ (After Melendez) is a still-life example of this process, a wildly contorting form composed of carefully choreographed and layered brushstrokes and volumes that recalls some of Francis Bacon’s more exuberant figures, and perhaps even Amy Sillman’s playful repartee with the language of abstraction.
The best, however, were two paintings based on Dutch landscape paintings: Portrait of ‘Barge on a River at Sunset’ (After Pynacker) and Portrait of ‘The Windmill at Wijk bij Duurstede’ (After van Ruisdael). In these, Schoolwerth sets aside issues of facture and dissolves the distinction between foreground and background in a way that unsettles the field of vision itself. Rather than figures and gestures on a background, however distorted, in these, he pushes the edges of the frame into the work; the horizon line, far from orienting your vision, undermines it. This was accompanied, at least for this viewer, with a hint of homey, Jim Shaw-esque ‘aw-shucks’ folksiness. I’m not sure how self-consciously rendered this aspect of the show was, but it won me over in the end by underscoring the artifice of the method. It also suggested that Schoolwerth has room to run, to develop ideas he had yet to fully explore here.