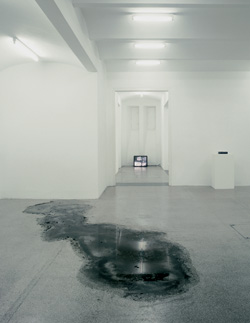 ‘Pigment Piano Marble’, the title of the group show curated by Berlin-based artist Mandla Reuter, might be recognizable to some as the series of media referenced by Marcel Duchamp in his essay ‘The Creative Act’ (1957), which posits the importance of the audience in the creation of an art work. The nod to Duchamp’s text, though, is more than a convenient framework for positioning the show in its conceptual context; it also alludes to the Dadaist’s own trip to Buenos Aires in 1918–9 to curate a Cubism show. While the premise of ‘Pigment Piano Marble’ was strong and coherent – tackling, among other things, issues of audience presence, absence or participation – on a practical level, the show was impossible to visit, consisting as it did of an outlandish construction that was set on top of an old theatre building at the address Maipú 327. Fortunately, the particularly useful catalogue described the piece in detail, guiding the reader through a series of ramps and elevators, hidden auditoriums and staircases, balconies and ledges, all contained by glass walls. Since Reuter’s own artistic practice often concerns the re-drawing of lines between the uses of public and private space, it’s typical that the opening was held at his own, more expedient apartment, located on the ground floor of the theatre building.

Reuter is obsessed with space: how it is read and used, and how those readings and uses can be completely transformed through fairly simple strategies. The works he has assembled in this group show reflect his interests and can be equated through a common conceptual approach to the construction and deconstruction of space; space that often seems to function as a kind of theatre, where something has either just happened or is about to happen. Indeed, the actual event – whatever it is or was – is not witnessed and, as such, this exhibition is rather like a lighthouse delineating a coastline where there are no rocks: a purpose exists, but the moment of possibility, or danger, has passed, or is yet to come.

Heimo Zobernig’s Untitled platforms (1996) – actually partition walls that he removed from an exhibition space – stretch out like an empty stage awaiting some unspecified performance, while Nevin Aladag’s Gemeinschaft des Augenblick (Community of the Moment, 2006) provides theatre seats for arriving visitors: as each seat is taken, a spotlight shines down on it, the theatre becoming increasingly brighter as it fills up with people; finally, when nothing happens ‘on stage’, audience members start to leave and the lights switch off one by one. Such works, which recontextualize space and make the audience the protagonist, recall some of Reuter’s own projects. Wartesaal/Stellwerk (Waiting Room/Signal Box, 2001), a collaboration with Frankfurt-based artist Michael Pfrommer, for example, re-dedicated the exhibition space at Kassel’s main train station as a Deutsche Bahn waiting room. Members of the public came and sat in the room, unaware that they were participating in an artistic intervention: the only indication that it was, in fact, being a poster on the wall bearing the artists’ names and the dates of the exhibition.

Relocating from theatre to film, but still con-fronting space and analyzing the received and adjusted modes of behaviour in reference to it, as well as questioning its reality or appropriateness, were works such as Kerstin Cmelka’s Untitled, curtain (2005), in which a black drape concealing a door is printed with the image of director Richard Fleischer gently manipulating Mia Farrow into position on the set of his 1971 film Blind Terror; Claus Richter’s Book-Party-Room 01.1 (2005), in which a re-convened film set, originally designed by students in the 1960s, reveals how the new mass culture replicated and identified with the fiction of the movies; or Christian Mayer’s Audio described scene from the film ‘Sherlock Jr.’ (Buster Keaton, 1924) (2004), in which the audience watches a bright white square of light while a voice-over tells them what they should be seeing. All these works seem to speak of audience manipulation, and perhaps Reuter is confessing he has himself been a stooge; in fact, his choice to temporarily relocate to Buenos Aires was partially motivated by the fact that in Paul Verhoeven’s 1997 film Starship Troopers, the Argentinean city is the future capital of the world. This fascination with the movies can also be witnessed in some of Reuter’s own works, such as his project for this year’s ARCO-linked public art event, ‘Madrid Abierto’. Here, he organized a free public screening of Tony Scott’s blockbuster film Déja Vu (2006) in a residential apartment, with the viewers sitting on a sofa directly in front of a large 35mm projector; the gigantic images and blasting soundtrack uncomfortably close to eyes and ears.

Since, as Duchamp maintained in ‘The Creative Act’, the artist is unable to aesthetically judge his own production, it could be hypothesized that the like-minded pieces in ‘Pigment Piano Marble’, which so closely echo Reuter’s own oeuvre, constitute less a public exhibition than an opportunity for the artist to grasp his own practice objectively – especially given the unfeasibility of accessing the show. In fact, if you visited Maipú 327 today, you would find no trace of the preposterous structure above the theatre, only the artist’s old apartment and perhaps a copy of the exhibition catalogue – the only clue that ‘Pigment Piano Marble’ might ever have taken place – whose text, however, is written by an author of fiction. It might also be of interest to the traveller to note that the Cubist paintings never came to Argentina and Duchamp’s attempt to mount his show failed. Reuter’s, however, went precisely as planned.