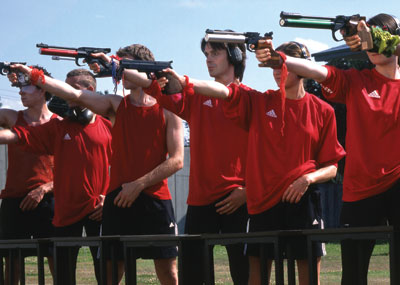 Announced in the summer of 2006, Jens Hoffmann’s directorship at the Wattis Institute found its first substantive public articulations in a set of exhibitions that opened in the autumn of 2007. These included a mural by Mario Ybarra Jr., ongoing projects with artist Tino Sehgal, a continuing series of 50 exhibitions keyed to the 50 states of the USA, called ‘Americana’, and two group exhibitions, ‘Pioneers’ and ‘Passengers’. (In the interests of full disclosure, ‘Americana’ is a collaboration with students from CCA’s Graduate Programme in Curatorial Practice, where I currently teach.)

A few paintings emerged from the shipping cards and maps: Yun Gee’s faux-Fauvist painting of Chinatown (San Francisco Chinatown, 1927) and Jay DeFeo’s glowering, vortical abstraction Cabbage Rose (1975). The latter’s paintings dominate any room they’re in – and indeed Cabbage Rose appeared ready to make a quick snack of the diaries and magazines arranged with arch-earnestness around it. Only the awesome collage Lord Pervert (c. 1956) by Jess – ‘Brown Custom for men of distinction’, reads its cut-up caption – looked ready to put up much of a fight.

The second room combined an ethnographic approach with the look and feel of a high school gymnasium; without the force field of Cabbage Rose to hold objects in some constellation, however arbitrary, juxtapositions here seemed merely slapdash. A vitrine presented prospecting tools from the Society of California Pioneers beneath a television screening Ant Farm’s Media Burn (1975); ‘fine craft’ works by Ed Rossbach and Rosie Lee Tompkins were perched above the amplified puddle of Paul Kos’ The Sound of Ice Melting (1970).

Lynn Hershman Leeson’s archive of her invented life as Roberta Breitmore was situated next to a film of a ritualized performance by the Cockettes (Trisha’s Wedding, 1971), ostensibly presenting something about identity, performance and gender. Yet this relationship was under-articulated. Both practices presented a performed femininity, among other things, but other major differences simply did not figure – among them, the relation between the Cockettes’ social and collective performances and Roberta Breitmore’s atomized and bureaucratic existence, the difference between a man performing femininity and a woman acting out womanhood, and so on. The rubric of pioneering meant to cut across such specificities – to sew these prospectors, activists, immigrants and perverts into a wish-image of San Francisco as a tribal bohemia – but failed to induce the sorts of surprises and counter-intuitive connections that fast-and-loose curating can sometimes provide.

Another wall presented a sound recording of Mario Savio’s historic speech to protesters from the steps of Sproul Hall and pages from The Black Panther newspaper, featuring brilliant lithographs by Emory Douglas. This stuff has an innate charge: ‘I’ve been forced to work all my life … scrubbing other people’s floors,’ reads one Panther declaration, ‘but those days are long gone and now I demand equality, justice and peace.’ It was hard not to be stirred. Hershman Leeson’s archive was evocative and discomfiting too, no matter how familiar. But the presentation of this regional history in ‘Pioneers’ was patchy – talismans of a history that didn’t extend much beyond what someone might have dug up on the Internet on a restless afternoon.

Upstairs was ‘Passengers’, a ‘permanent but constantly transforming exhibition’ of around a dozen emerging international artists, combining group presentations with a ‘solo’ show, staged in a tiny space constructed in the centre of the gallery. Each artist gets his/her turn in the centre cube before being cycled out (Daria Martin was the first, and Brazilian artist Alexandre da Cunha was on stage when this was written, with Ryan Gander and Shana Lutker on deck). This round-robin has its virtues, not least because it gives emerging artists an extended showing in an established institution; and the artists are generally of high quality, especially those, such as Valérie Mréjen, João Maria Gusmão and Pedro Paiva, engaged in a strange, static version of filmmaking. It was hard to shake the feeling, though, that this was a repository for artists whose practice suited Hoffmann’s taste for clean work with a sort of decorative Conceptualism – a well-cast film without much of a script.