A full report on last week’s attacks on gallery-goers 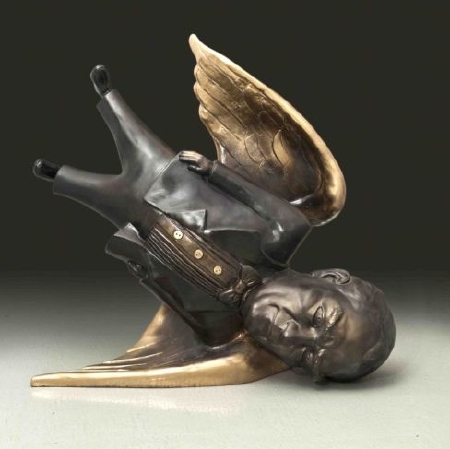 At Istanbul’s Galeri Non, Extrastruggle – a collective of one – stages a chess game between political figures. In the gallery entrance is a polyester sculpture of Mustafa Kemal Atatürk, the founder of the Turkish Republic, painted as a fallen angel, standing on his head and resting on a gilded wing. The other statues are each one colour. Taken together, they spell out the Palestinian flag. In the rear corner of the gallery is a red ‘Turkish Tote’, an unstable stack of Atatürk heads poised on a white star. The other half of the Turkish flag, the white crescent, rests like a machete in the skull of a burka-clad figure – Atatürk’s wife, perhaps? Eyes peer out all over the burka like a horde of spies in a Pink Panther film.

Upstairs, a white Lolita-ish figure lounges on a tie-died sarong, her bikini slipping off, and an F-16 planted on the sole of a pretty upturned foot. She is reading the Turkish Constitution – a reference to the referendum on September 12 which narrowly handed further powers to the Turkish government deemed ‘Islamist’, and opposed by the Kemalist military. Nearby, Kurdish rebel leader Abdullah Öcalan, imprisoned on Turkey’s Imrali island since 1999, appears as a green merman, giving the PKK salute from a golden cage.

‘I didn’t do this, you did’ is the title of Extrastruggle’s first solo show since the 2007 Istanbul Biennial. Galeri Non is the larger of the cluster of young, independent contemporary art galleries in Istanbul’s Tophane district. They began appearing about three years ago. There are now six, all run by women. Other art spaces include Depo, a former tobacco-factory and the hub of the Istanbul Biennial since 2005. The main artery is Boğazkesen, a long street that winds steeply up from the Bosphorous strait, and the Istanbul Modern past Academy of Fine Arts. Above it, is Istiklal, a wide avenue, home to foundations as well as some larger, more commercial galleries like Cassa Dell’Arte, currently showing ‘Hans und Helga’, a show committed to German art that discusses German stereotypes: Bratwurst, porn and DIY all feature, framed by walls of empty cardboard Beck’s beer cases. To the west lie tourist attractions of the historic Galata district and Topkapi Palace. Tophane’s appearance on the global map of contemporary art centres was inevitable.

Last week, on September 21, there was a collective opening by several of the galleries on the Tophane Gallery Walk. Other shows included a group show at Outlet and ‘Women/Obsession’, by French fashion photographer Michel Comte, at newcomer Elipsis. Nearby Pi Gallery is hung with sculptures of melted picture frames, painted red and dangling from meat hooks. The overspill outside Galeri Non was the largest, pressed against the entrance holding plastic cups of punch. The crowd included cultural attachés, international journalists and several artists and students, local and international. It could have been London or Berlin – if it wasn’t so quiet and well-behaved.

I was in Pi Gallery when two men appeared at the door before tearing off down the street towards Galeri Non. A mob converged further down the street, shouting at people to ‘Fuck off, we don’t want you here’ in Turkish and wielding batons, fire-extinguisher-sized canisters of pepper spray, broken bottles, knives and molotov cocktails. Nazim Hikmet Richard Dikbas, an artist whose works have appeared in shows in the area, received a face full of pepper gas and a blow to the head with a 1.5-metre-long metal rod, where he now has a neat set of stitches. Dikbas, official translator for the Istanbul Biennial, remembers seeing another man lying on the floor being punched and kicked. There were two police outside Galeri Non when the attacks occurred. One man called to them to radio for help. ‘You can call 155 yourself if you like,’ one answered. Half an hour later, the mob had dispersed, two more police arrived and one man was arrested. Five people were hospitalized. A Polish man had to have reconstructive surgery after being glassed in the face.

The attackers were shouting at people to get back into the gallery, but at the same time, there was another group of men beating people back from the gallery entrance, Dikbas remembers. Derya Demir, Non’s gallerist, managed to get as many people inside as possible and pull down the gallery shutters. The Elipsis space was used as a safehouse before owner Sinem Yoruk arranged a police escort to take people home. Friends of mine were invited into nearby buildings by locals to take shelter. What surprised them most was how calm everyone was. Seven people were arrested but all were released when no one could identify them in a police line-up.

The next day a joint press release appeared from galleries, artists and victims. The attack was planned, it said. GriZine, an online culture and art magazine, published an ironic article calling for people to show up at the next opening in gasmasks. Hurriyet, the Turkish daily newspaper, first suggested that the attack was due to the political nature of the Extrastruggle exhibition, but it became clear that this wasn’t the case. As the week unfolded, each day there was a new story: there were 50 attackers instead of the initial 20. Knives were added to the list of weapons. The incident had nothing to do with the content of the art, but local anger at alcohol consumption on the streets, offensive behaviour, alleged public nudity and gay hostels. Then it was about gentrification and rent hikes.

By Thursday, the Turkish Prime Minister mentioned the event in parliament, making a judiciously even-handed comment about mutual respect and toleration. More interesting was the remark by the cultural minister on a visit to the galleries: ‘Change always hurts. But let this be known: nobody can force their Anatolian lifestyle [upon others] in Istanbul, but nobody has the right to turn a blind eye to the [traditions] of the people here, either.’ One senior Turkish artist, now based mainly in London, told me via email that what surprised her most about the attacks was that they were officially condemned. The message was clear, Tophane will remain an art district, but the terms of the agreement remain unclear. The artists and gallerists expect the event to disappear from focus within a few days. News reports from Associated Press explain the attacks as evidence of continued tensions in a state divided between Europeanization and a conservative government. On Friday, an op ed piece in the Hurriyet spoke in favour of the galleries.

In August, Tophanehaber, the local news website, printed articles and comments from ‘concerned residents’ that run the gamut between plausible, mad, incomprehensible and hilarious. In hindsight, they were unveiled threats. ‘We’ve got rid of them before and we can do it again,’ read one. In other milieux, coded references were made to ‘neighbourhood pressure’, itself a local concept, like the Ergenekon, an organized crime circuit, the 1955 Pogrom against Greek residents, two local fascist groups and organized drug and theft circles with police connections, and the ‘deep state’ – a Turkish concept, designating the people who stay the same when governments change.

Knowing next to nothing about Turkish history and politics, I took a crash course from willing locals in and out of the art scene, scoured the Internet, and then returned to the Extrastruggle exhibition a couple of days after the attacks to see if it made more sense. It didn’t, but there was a change in perspective. The icons at the centre of the show loomed larger, seductively simple, against a background that seems impossible to disentangle. The point is not so much what the head of Atatürk stands for here, but what it obscures. It’s possible to imagine a version of the exhibition where, instead of political figures, you take terms like ‘gentrification’, ‘cultural difference’, ‘religious extremism’ or ‘fascism’. The effect is the same. The confusion comes not from a lack of access to the necessary cultural or historical references, but the assumption that therein lie the explanations. While the meaning lay on the surface. What happened outside the gallery was a brilliant performance of the exhibition inside. Which makes me think that it was probably a damn good show.

Sam Williams is a writer, director and dramaturg, based in London, UK.

Applications now open for the 2022 season of No.9 Cork Street

Frieze
Frieze Will Launch a New Fair in Seoul