Talking to Foreign Office Architects about branding, élitism and their concept of 'species' 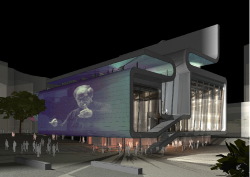 The title of Foreign Office Architects' exhibition at the ICA was 'Breeding Architecture'. Accompanying the show was a dense monograph, Phylogenesis: foa's ark (2003), a title that underlines the biological metaphors threaded through the studio's work. Founded in 1992 by Farshid Moussavi and Alejandro Zaera-Polo, both 'graduates' of Rem Koolhaas' hugely influential Office for Metropolitan Architecture, the firm won the competition for the $200m Yokohama Ferry Terminal in 1995, catapulting them into the architectural firmament.

The Yokohama commission allowed Moussavi and Zaera-Polo, who are partners in their private life as well as professionally, to escape the label of 'paper architects' and build a series of projects that, while remarkably different, none the less embody a certain approach. New projects include the Music Box, a studio-cum-concert hall for the BBC in west London, and a police station in La Villa Joyosa, Spain.

FOA manipulate form through the application of process; space is pinched, rippled and bifurcated. The 'Breeding Architecture' exhibition presents both a fluid retrospective of their work and an accurate depiction of the architectural process (which all too often relies on over-simplification). Above all, though, it displays the FOA family tree. This device, set out in Phylogenesis, classifies the studio's built and unbuilt work as a series of 'species', bred through the lines of research and inquiry generated by each brief.

Jonathan Bell: There are many ways of talking about FOA. I think process is the most interesting approach. You've said before that you start with a diagram, whether it's a plan, the function of the building, the site, or the circulation. How does that main issue get defined, in the case of the BBC for example?

Farshid Moussavi: It varies from project to project. With a ferry terminal you know that circulation - of people, cars, goods, luggage - is the most important element. We also had the very specific problem of it being a seismic site. These constraints isolated a number of ways to construct the building. With the BBC project, there are two main things. Obviously acoustics are important because you're dealing with music, but the BBC also wanted an iconic building. We decided that it should not be our architecture that creates the icon, but that the icon should emerge from the nature of the institution, from what the building contains.

JB: I think it's brave to be a 'brandless' architect at a time when architecture is becoming more branded rather than less. Architects are embracing branding and seeing it as an opportunity to raise their prominence. And maybe it produces bad buildings - I think perhaps it probably does.

FM: But if you look at that in a positive light, probably any intelligent client would want something tailored for them. Maybe they look at the works of certain architects who are systematically of a certain type, and they expect a certain approach.

JB: Are you revealing more of the process than other architects?

FM: The ICA exhibition shows what feeds us from the outside - like local regulations, clients - and what are the elements that we carry with us and which inspire us. The result is a set of documents. I mean, an architect doesn't physically build a building. An architect draws drawings and makes the specification.

JB: Do you think the 'star system' in architecture emerged from this country or from America, or from a combination of the two, in terms of high-tech?

Alejandro Zaera-Polo: It emerged from everywhere. It emerged from the fact that architects increasingly had to learn to practise globally and they reacted by setting up a brand, because it was the easiest way of having a certain recognition wherever they went. Those who emerged from Modernism, like Gropius and Breuer, promoted corporate practice that was not about a single style but about technical proficiency: The Architects' Collaborative, or SOM [Skidmore, Owings and Merrill LLP], for example. That model collapsed somewhere at the end of the 1960s as it was producing very boring things.

The first generation of star architects - people like Arata Isosaki, Rafael Moneo, Peter Eisenman, Frank Gehry - practised in an entirely different way. They realized that it was more interesting to become artists or individual authors with a small office, understanding that they were part of a certain constellation of artists that had a certain brand and that played that game with each other.

JB: It's very difficult to avoid becoming a star if one has a media profile. To a certain extent what we're doing now is making you into stars. Can you avoid that?

AZP: I don't think it's a matter of avoiding it. It's true we're not particularly interested in exploring language consistency, but at the same time the concept of Phylogenesis is trying to explore style, to find out what the consistencies are that you can trace in our work during the last ten years. In fact, you do encounter certain tendencies and forms that are repeated, so you could say that they become part of the FOA brand. We try to always challenge that, and to escape it. We do projects like the [theatre and auditorium at] Torrevieja, the police station at La Villa Joyosa or the hotel at Groningen. If we see that the situation is not adequate for one of those species, we invent another species. We have no concern about having to move out of the formal or linguistic repertoire.

Some of our students at a Columbia University workshop used texts on natural sciences; on morphology, typology, etc. The idea of typologies in architecture emerges at around the same time as the Enlightenment, when the first classifications of animals appear. We read these texts and found the idea of species as a potential replacement for typologies, because species are also consistent organizations. But rather than replicating themselves exactly, they have a spatial domain and a temporal domain: when a species moves out of a certain climate, it dies. Over time a species mutates, or proliferates into various species to increase its adaptation to a certain milieu.

JB: The idea of a complex world is better communicated in the drawings than in the projections. They seem more about mood.

AZP: But that's exactly what it is - almost like a fetish. Images and things that we like. When you say that the work is complicated, it's probably formally not more complicated than Gehry's work, Zaha Hadid's work or that of many other contemporary architects. Architects are somehow mimicking the complexity of the world, and I believe that among the general public there is an increasing capacity to understand complex work.

FM: When Yokohama opened, it was a very revealing moment because it was a building that suddenly gave people new conditions and they were very responsive to it. People were improvising the ramped areas and curved corners in incredibly surprising and unconventional ways.

JB: Does the architect have a responsibility to create a spiritual sense of place?

FM: I don't think architecture should be too religious about things - it should be able to accommodate everybody. Architects should design IKEAs and McDonalds - that would be a better way of contributing to the world than staying away from them. Our cities would be much better if we had better designs for all the Sainsbury's and Tesco's supermarkets, the launderettes, the Starbucks - that is what wraps us. Try to make a city by actually getting involved.

AZP: I think architecture per se is not élitist - it's much less élitist than art, for example. It's conceived without a frame, you cannot avoid it; you are involved in it, no matter what you do. We are fortunate in that most of the things we do, perhaps because we started with Yokohama, are public projects. We have commissions from governments of other countries - but it doesn't mean that this is the only way of engaging with the public. Before he left Selfridges, we were called by Vittorio Radice to do a new store, and we were genuinely excited by that, because a department store is a privatized public realm, like Starbucks or Sainsbury's. It's an increasingly important part of public life in the city and one we haven't had a chance to explore.