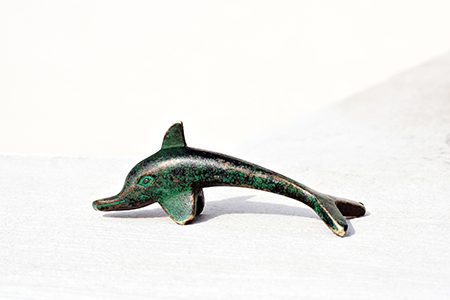 What things keep you company in the space where you work?

A little green metal dolphin acquired from a tourist stall in Knossos, Crete. It brings me luck – has done so from the very moment I got hold of it. Two black and white photographs by Thomas Wågström: one of the eyes of a seal, hardly visible in the dark water; another of a child’s dress, shimmering against the dark. It’s about death, of course, and I don’t like to surround myself with such reminders, but the shimmering of the dress, and that light ... I keep staring at it. It’s as hypnotic and enigmatic now as it was the first time I saw it. A drawing of a plant, called Strelitzia augusta: it’s from 1845 and looks unfinished, like it’s coming into being while you are watching it; like it’s growing in front of your eyes. A wooden ship painted orange; it must be a supertanker, but the dimensions are somehow wrong. One of my daughters made it when she was seven. And then hundreds of books on the shelves behind me, to the right and to the left. I have only read a few of them, but I believe that their contents are magically transferred to me, just by my being in the same room. I see the second part of Goethe’s Faust (1831) and its aura starts to work in me, and in what I write.

I saw a painting by Lars Hertervig, when I was 19 years old, at a museum in Bergen, Norway. It was so silent, and so beautiful, that I had tears in my eyes without knowing why. It still puzzles me, and I’m not sure if it’s of any worth to be moved or touched like that – what’s the value of tears? But it feels important. Hertervig was a young genius of Norwegian painting, I later learned, who went mad and disappeared from society. But he continued to paint on whatever he could get hold of – tobacco boxes, paper slips – and some of these paintings are stunning: they look like images from dreams – a king in a boat, men on horses – very archaic, but set in recognizable landscapes. They are so inspiring that one little drawing on a box can evoke three novels, maybe even four ...

If you could live with only one piece of art what would it be?

That supertanker made of wood.

What is your favourite title of an artwork?

I never notice titles and I can’t think of anything more irrelevant – it’s an image, for God’s sake. The whole point is that it directs itself towards you in all other ways than through language. I hate language. I hate reason. I love emotions and small unexplainable movements in the soul.

The human heart. What could you imagine doing if you didn’t do what you do? If I wasn’t such a Protestant, I would love to do nothing for a whole day: just lie in bed and maybe watch a film, then sleep a little, then maybe watch a game of football and, if possible, sleep a little bit more.

In the car, my girls insist on music that features women singing, so we listen to Rihanna, Lady Gaga and Veronica Maggio. In my study, there’s a lot of music from my own youth. I still play The Clash’s London Calling (1979) occasionally – not a sign of regression, but of non-development. I also listen to bands like Midlake, Iron & Wine, or artists like Bonnie Prince Billy.

I recently read Donald Antrim’s The Emerald Light in the Air (2014). It’s some of the best writing I’ve read in years.

Where I live, the clouds are absolutely amazing, especially from May to September. Enormous formations just hang in the air on the horizon. I like to watch them. And I like trees a lot. My English isn’t good enough to explain what kind of trees I like, and how they look, but if you think of them as creatures – some of them several hundred years old – and see their slow movements in the wind, as it flows over the fields from the sea in the afternoon, it is hard not to be wildly happy.

is a Norwegian author who lives in Österlen, Sweden. His six autobiographical novels, Min Kamp (My Struggle), published in Norway between 2009 and 2011, and are being translated into numerous languages. The English translation of the fourth book from the series will be published in the us in April 2015 by Archipelago Books.