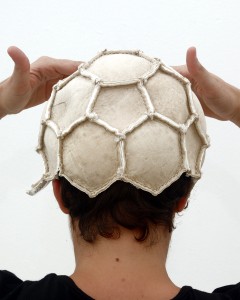 I was glad to take a train uptown to the Bronx recently to see the mid-career survey of Quisqueya Henríquez. Since she has received little exposure in the USA, I knew nothing of her work; nor have I been to Cuba, where she was born in 1966 and from whose avant-garde she emerged in the late 1980s when she attended art school in Havana, or to the Dominican Republic, where she spent 12 formative years of her youth and where she is now based. And the Bronx was certainly the appropriate venue for this show, because a large population of Dominicans have now settled in the area around the museum, and Henríquez’ show brought with it some of the country’s
evocative sights and, quite literally, salty flavours.

Aptly, the show took its title from The World Outside (2006), the video that delivered the exhibition’s most panoramic and encyclopaedic pictures of the Caribbean island. Cut-up footage shot from the single vantage point of the terrace outside Henríquez’ high-rise apartment revealed all manner of sights: giant cruise liners sailing into port, a woman brushing leaves in front of a garage, a man directing on a donkey and cart, a rainbow-coloured parachute descending from the sky. There were snatches of the beach: ‘Untitled (Seaweed)’ (1991) is a series of photographs that records an early work in which Henríquez used seaweed to form a honeycomb pattern on the sand. And in a judicious nod to the Yankee Stadium, just a few blocks away from the museum, curator Amy Rosenblum Martin included a series of collages that make reference to baseball (the Dominican Republic is a peculiarly rich seedbed for players). The ‘Untitled (Baseball Players)’ (2007) series features images of disembodied players joined in a mesh of legs, lone gesturing hands and a scattering of helmets, all exposed against a white backdrop. There was even a flavoured Caribbean treat at the end: Henríquez had supplied a batch of her Caribbean Seawater Ice Cream (2002), which is exactly as advertised: its colour an appealing turquoise and its taste sour and salty, with a barely redeeming inflection of rum.

Of course, the ice cream summed up Henríquez’ attitude to idle cultural tourists such as myself: get real. She won’t have us entertaining dreamy notions of Caribbean peoples. She counters ideas of island hotheads with ‘Frozen Clothes’ (2001), a series of photographs of bunched-up, frozen clothes. And another photo series featuring dilapidated street furniture and crumbling monuments, ‘Public Space’ (2006), reminds us that the Dominican Republic is not an island paradise. Indeed, throughout the show there was a subtle traffic between stereotypes and their reversal, and the message was rammed home in the catalogue by Mónica de la Torre, who contributed an amusing ‘non-guide’ to the island.

One cannot but agree with this sentiment, and one must remember it in looking at the art as much as the island, cautiously acknowledging some ignorance before it. That said, contemporary art does have its own lingua franca, and it’s one that Henríquez speaks fluently: she works – not with startling innovation, but with lively clarity – in the established modes and means of post-Minimalism and Conceptualism. The upside is that this vocabulary allows her art to travel to venues such as New York. The downside, perhaps, is that travelling, for an artist such as Henríquez, tends to mean being plugged into the circuit of biennials and curatorial head-scratching. Rosenblum Martin made that apparent in her own contribution to the catalogue, which was a veritable goulash of theory; but she did make some good points. On the one hand, she seemed to suggest, artists such as Henríquez have obligations to engage with international popular culture – to mix it up, hybridize and localize it. And, clearly linked to that, the show featured an intriguing selection of objects from Henríquez’ ‘Playing with Adversity’ series (2001), which comprise standard-issue sports’ balls cut up and made into curious ornaments. On the other hand, Rosenblum Martin suggested, artists may also have an obligation to stay at home and represent the slowly erasing culture of their locality. And in her video Dance Hall (2004) Henríquez was doing that as well, pointing her camera through a craterous hole to capture the whirring legs of a man dancing the merengue on a rooftop. Hers was a rough guide to the Dominican Republic – but, I imagine, a reliable one, and if I was in Santo Domingo trying to kill a few hours, I’d follow her leads.