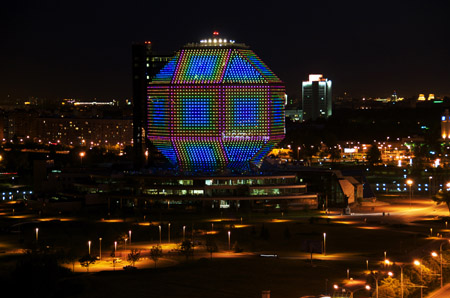 Around 300 BCE Euclid demonstrated that new geometric forms are not invented – that they are only ever defined from a basic set of building blocks. In this sense the idea that artists are working with a finite tool-kit of regular shapes, understood via a series of logical rules, is nothing new. Undeterred (or perhaps inspired) by such historical and mathematical constraints, Raphaël Zarka’s ongoing study of the 26-sided rhombicuboctahedron – first discovered by Archimedes in c.200 BCE – seeks to tease out un-tapped potential from pre-existing forms.

The French artist’s obsessive documentation of the rhombicuboctahedron, or the ‘rhombi’ as he affectionately calls it, began in 2001, when he happened across a couple of discarded concrete breakwaters on the side of a road near Sète, in the south of France. Since that moment Zarka has catalogued the rhombi’s genealogy, from its first depiction by Leonardo da Vinci (in Luca Pacioli’s 1509 treatise De Divina proportione) to its largest manifestation to date, the 72-metre-high National Library of Belarus in Minsk. Along the way he has taken in Philips light bulbs, a Rubik’s Snake and a mention in the film adaptation of Harry Potter and the Half Blood Prince (2009).

A selection of this work was presented at Bischoff/Weiss for his first solo show in London. The fruits of Zarka’s ‘archival impulse’ were brought together in Catalogue Raisonné des Rhombicuboctaèdres (2010), a large-format poster – a pile of which sat on the floor – consisting of chronologically ordered reproductions and details of 52 examples of the rhombi. Elsewhere in the same gallery was a night-time shot of the Minsk library, taken when the building is transformed by a light display, and two photographs from the series of eight Carton d’invitation 2007–10 (2010) – a black and white shot of the library under construction and what was perhaps the first discovery of the breakwaters. Leaning against the wall close by was the rather shamanic Rhombistick (2010), an elongated version of the rhombi carved in wood by the artist. Zarka’s documentation of the provenance and evolution of the rhombi – from classical embodiment of mathematical perfection to utilitarian light fitting – points to an alternative brand of formalism. Rather than attempt to define the rhombi, Zarka shrouds it in mystery by re-presenting it in different guises, a fanatical approach that contrasts with the logical Euclidean rules.

The exhibition’s title piece was Rhombus Sectus (2009), a film documenting the library in Minsk from various viewpoints throughout the city and at different times of day. The 12-minute work contains no dialogue or soundtrack, save the background murmurings of everyday city life, and resembles a sequence of filler scenes from a low-budget sci-fi movie. Yet, like Zarka’s project as a whole, it is the film’s ambiguous undercurrent – achieved through the unnervingly still camera, the unfamiliar summer setting of the Belarusian capital and the extraordinary form of the building itself – that imbues Rhombus Sectus with an alluring mystique. Whilst Zarka’s project reawakens found forms, it is this sense of wonder that aligns him more with the monumental proposals of the earthworks generation; his fascination with the rhombi’s aura and the rationality it embodies echoes Robert Smithson’s notion of ‘abstract geology’. So, while Zarka accepts – even delights in – the fact that form cannot be made anew, Rhombus Sectus suggests that, for him at least, there is plenty more to be discovered.

Nick Aikens is a curator at the Van Abbemuseum, Eindhoven