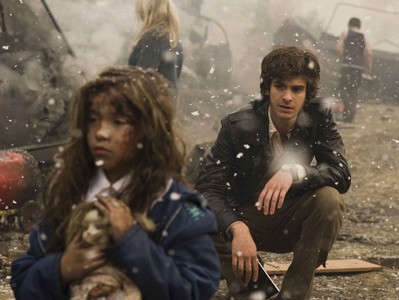 Brutal, implacable and darkly beautiful, Channel 4’s extraordinary adaptations of David Peace’s novels 1974 (1999), 1980 (2001) and 1983 (2002) are the kind of television dramas that some of us had stopped hoping could ever be made in Britain again. The three films – collectively titled Red Riding – are the most striking dramas of this decade, towering above the usual costume epics and routine police procedurals. Indeed, in their use of setting and landscape the Red Riding films attain an expressionist naturalism that exceeds practically anything British cinema has achieved in the past 30 years.

Peace’s four Red Riding novels exorcize and excavate the near past. They stalk the West Yorkshire that Peace grew up in, transforming real events – the framing and intimidation of Stefan Kisco; the incompetent police operation to catch the Yorkshire Ripper – into background for brutal fictions that possess an apocalyptic lyricism. It was inevitable that some compression occurred in the transition from page to screen; indeed, one whole novel from Peace’s quartet – 1977 – was never filmed, but screenwriter Tony Grisoni (Fear and Loathing in Las Vegas), who adapted the novels, deserves immense credit for having woven the three films into a coherent set that refuses easy closure and intelligibility.

Peace has often been compared to James Ellroy – indeed, he called the experience of reading the American crime writer’s White Jazz (1992) his ‘Sex Pistols moment’. But Peace builds upon what Ellroy achieved in the way that the post-punk groups worked in the space that the Pistols had blown open, developing a pulp modernist poetics from Ellroy’s experiments in compression. While Ellroy’s pugilistic prose has a pump-action amphetamine rhythm, Peace’s writing is hypnotic and oneiric; its incantatory repetitions delaying and veiling plot revelations rather than rushing towards resolution. Despite presenting seemingly similar worlds – in which the police are routinely corrupt, journalists are venal and co-optable, and the wealthy are vampiric exploiters – the writers’ political orientations are very different. Ellroy is a Hobbesian conservative, who evinces a macho pragmatism that accepts violence, exploitation and betrayal as inevitable. While the same phenomena are oppressively omnipresent in Peace’s world, there is no sense of acceptance: his novels read like howls of agony and calls for retribution – divine or otherwise.

Peace’s equivalent to Ellroy’s anti-hero, corrupt detective Dudley Smith, is Maurice Jobson, a whey-faced policeman who features in all three of the Red Riding films. Where Smith (as played by James Cromwell in the best Ellroy adaptation to date, L.A. Confidential, 1997) is charismatic and flamboyantly loquacious, Jobson (as played by David Morrissey in the C4 adaptations) is taciturn, abstracted and immobile. Morrissey’s is one of many excellent performances in the trilogy. Elsewhere, Paddy Considine (pictured above) brings a flinty resolution to the role of Peter Hunter, the senior Manchester detective assigned to investigate the West Yorkshire police force in 1980. Hunter finds himself caught in a world in which things just don’t add up – they don’t fit together. It’s a Gnostic terrain. The Gnostics believed that the world was made of a corrupt matter characterized by heavy weight and impenetrable opacity: a murky, muddy mire in which fallen angels – one of the persistent images in the Red Riding books and films – are trapped. The Red Riding world is one in which, as Tony Grisoni puts it, ‘narratives disappear into the dark’ (almost every scene in 1983 features an artificial light source feebly struggling against an overwhelming gloom). Light only brings more shadows; revelations only lead to more mysteries. We see much of the action only partially, from behind characters’ heads or at oblique angles. It is extremely heartening that the adaptations keep faith with the intractability of Peace’s fictions, not giving into the temptation to smooth over ellipses and ambiguities with hasty plot resolutions and gabbled exposition.

Red Riding is as remarkable for what it doesn’t do as for what it does. It doesn’t offer an ‘emotional journey’; it doesn’t patronize the viewer; it doesn’t evoke the ’70s and ’80s with overworn signifiers. Rather than resorting to the expected glam rock of Mud and Sweet in 1974, there is King Crimson and dreamy Northern Soul. The brooding soundtrack of 1980 pays subtle tribute to the music of Throbbing Gristle and Joy Division which colours and informs the novel. The Red Riding trilogy as a whole is like a piece of post-punk music. It demands to be replayed many times, and each new viewing reveals more depth and nuance.Red Riding starts on Thursday 5th March at 9.00pm on Channel 4