[member:membership-name]
[member:full-name]
VIEW MY DASHBOARD
BY Michael Bracewell in Reviews | 01 MAY 14

The art and ideas of Richard Hamilton, who died in 2011 aged 89, might be summarized as a conflation of European intellectualism and the artisan-industrial technology of American glamour. Historically, the development of his work kept pace with the progression, since the early 1950s, of the commodity culture and mass media that has shaped the world as we experience it today. In this sense, there are perhaps few artists more ‘contemporary’ than Hamilton, in terms of their depiction and critique of the modern world.

Few artists, too, have been more generously and elegantly articulate about their motives, thinking and working processes. In his essay ‘Romanticism’ (1972), Hamilton observes: ‘I have, on occasions, tried to put into words that particular mixture of reverence and cynicism that ‘pop’ culture induces in me and that I try to paint. I suppose that a balancing of these reactions is what I used to call non-Aristotelian or, alternatively, cool.’

It is the nature of this balancing act and the precision thinking behind its undoubtedly cool allure that seemed to lie at the core of three recent exhibitions of Hamilton’s work in London, and provided the inspiration for a new film by artist Liam Gillick (Hamilton, 2014), screened at the Institute of Contemporary Arts (ICA) in March. Individually and collectively, these various surveys made a seemingly inviolable case for Hamilton’s achievements and influence to rank alongside those of Andy Warhol and Marcel Duchamp, as a pioneering analyst of the relationships that might exist between conceptualism and artistic process in the face of an increasingly techno-centric and accelerated socio-culture.

Two galleries at the ICA were given over to the meticulous reconstruction of two early didactic exhibition projects originated by Hamilton (the latter in collaboration with Victor Pasmore): Man, Machine and Motion (1955) and an Exhibit (1957). Of an Exhibit, Hamilton later recalled (in his book, Collected Words, 1982): ‘I proposed that we might make a show which would be its own justification: no theme, no subject; not a display of things or ideas – pure abstract exhibition.’ The intellectual and conceptual clarity of this idea seemed to establish a set of qualities that would maintain the formidably keen edge of Hamilton’s art and thinking over the next half century. Seen now, Man, Machine and Motion and an Exhibit had the air of exhibitions that had time-travelled to the present from a remote future. 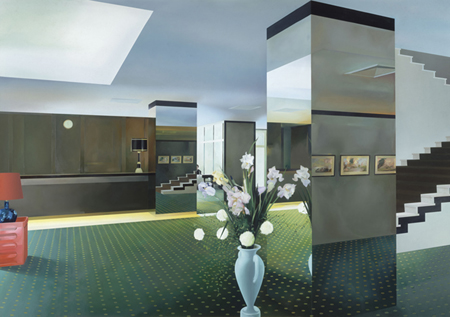 The former consisted of images depicting the historical relationship between man and machine, mounted and fixed within four distinct groups of open frames – the effect being not dissimilar to a maze-like educational display, such as one might find in a library or the lobby of a conference centre. In one of the upstairs galleries at the ICA, an Exhibit consciously intensified this maze-like effect, hanging translucent coloured panels in groupings from a grid of steel wires, through which the viewer created their own orientation. Both re-creations conveyed the energizing radicalism of these early exhibition projects: the complexity of their apparent simplicity (and vice versa) routing the poetry of conceptualism through the mathematical rigour of a design solution.

‘Richard Hamilton’ at Tate Modern was an exhaustive retrospective of the artist’s work, following a linear chronology and occupying 18 rooms of the gallery. As Hamilton was an artist for whom process itself was a principal and vital medium, and across whose career the interrelation of subject and process – the synthesis of concept and technical execution – remained central, the Tate’s unfussy curatorial approach enabled the viewer to clearly understand the cumulative nature and flow of Hamilton’s ideas.

For those unacquainted with the sheer extent and diversity of Hamilton’s work, this exhibition described its development from a sociological engagement with the burgeoning popular culture of the 1950s, through successive explorations of subject and medium, often in relation to advances in technology. Even for those who knew Hamilton’s work, the reminder here of his better (and lesser) known range, and its place within the iconography of contemporary culture, was staggering: the great early pop paintings and studies of interiors; Swingeing London 67 (1968–69) and ‘Solomon R. Guggenheim’ reliefs (1965–66); the research into and reconstruction of Marcel Duchamp’s The Large Glass (1915–23); his work with branding as a form of ironic self-portraiture and investigations into the romanticized visual language of advertising; ‘fashion plate’ collages; the iconic ‘moral’ works examining the war in Northern Ireland and student protest in America; the astonishing ‘Lobby’ paintings – and so on.

Consistent throughout was a tension between intellectual clarity, ice-cool technological execution and the intensely felt, romantic warmth of the subject matter – that ‘particular mixture of reverence and cynicism’ enabling not only Duchampian wit and irony but also profound empathy for the frailty and volatility of much human experience: Hamilton’s vision – for all of its delight in technology, design systems, intellect and word-play – was fundamentally grounded in humanism and commitment to social justice.

Hamilton made the now-iconic small (26 × 25 cm) collage Just what is it that makes today’s homes so different, so appealing? for the catalogue accompanying ‘This Is Tomorrow’ at London’s Whitechapel Gallery in 1956, which included the audio-visual installation titled This Is Tomorrow, Group 2 (1956, re-created at Tate Modern) upon which Hamilton worked with architect John Voelcker and theorist John McHale. Created the same year that Elvis Presley recorded his first hit record, ‘Heartbreak Hotel’, this piece has come to be acknowledged as one of the starting whistles for the pop age. The ‘prescribed list of interests’ as Hamilton later described them (such as ‘TV’, ‘telephone’, ‘History’) that determined his collage summarized contemporary society of the time, and remain more or less comprehensive and even more anticipatory of the digital age than seems possible.

Once working within the capacities of pop, informed all the while by his engagement with and interpretation of the works of Duchamp (a room was devoted at Tate to their collaboration) Hamilton identified subjects, all taken from found images, that become epic statements about the nature of our times. Advertising, fashion, glamour, celebrity, design, war, politics, protest, technology, branding: in work made between the late 1950s and the early ’90s Hamilton explored these subject areas in a manner, for the most part, at once monumental and aphoristic.

Accusations that Hamilton’s work can be too cerebral or ‘clever’, or that the notion of ‘cool’ can at times become almost too chilly, seemed confounded by the aesthetic richness and empathetic engagement with feelings as much as society that were described by this exhibition. For the most part, I found myself reminded of a conversation I once had with the artist during his last years, when he said that he had always wanted to make art that was ‘multi-allusive’ – reaching out to the experience of being alive in the modern world – but that equally he was ‘after beauty, too’. In this sense, in literary terms, Hamilton was a Flaubertian artist as much as a disciple of James Joyce, whose works he illustrated.

Less persuasive, perhaps, despite their sincere conviction, were Hamilton’s later and angrier excursions into more directly political subject matter. While The Treatment Room (1983–84) as an installation proposing a bleak institutional facility, remains sobering as a side-swipe at Thatcherism, both War Games (1991–92), comprising a TV seemingly leaking blood as war coverage is depicted, and the portrait of Tony Blair as an ineffectual cowboy gunslinger (2010) could appear unusually heavy-handed.

The importance of Hamilton’s art and ideas in relating the insights and iconoclasm of dada and surrealism to the activity of art making in an age of mass media and mass production was much in evidence in ‘Richard Hamilton – Word and Image: Prints 1963–2007’ at the Alan Cristea Gallery. Hamilton described himself as ‘a print-maker as well as a painter’ (Printmaking, 1970) and the works in this exhibition, intricately technical in their layering of several forms of print media, each occupied a different yet unified pictorial and conceptual sensibility while all achieving a sense of timeless modernity. The near abstraction of People (1968), the sumptuous pop figuration of I’m dreaming of a black Christmas (1971) or the techno-dream-home eroticism of Chiara and chair (2004) – all seem to inhabit the future as much as the present. Print could bring out the best in Hamilton, as evidenced (for example) by the collage-like overlaying of monochromatic images – stark, sombre, enthralling – of his Berlin Interior (1979).

Liam Gillick’s film Hamilton, an impressionistic and deeply felt homage to the artist, includes footage of the bogus TV commercial made to accompany the ‘Hamilton’ brand name multiple The Critic Laughs (1971–72) (comprising, gift-boxed, a set of dentures fastened to an electric toothbrush). In a series of episodes prompted by aspects of Hamilton’s work and career, the film’s soundtrack included audio recording of Hamilton’s own interview with Duchamp – in which the latter, while benign and gentlemanly, remains evasive and calmly intent on denying almost any association with any defining or explanatory statement, save the most contrary.

Gillick’s film concluded with a vertiginous tour of the Hamilton retrospective at Tate Modern, to the soundtrack of Sly and The Family Stone’s cover of ‘Que Sera Sera’ (1973) – picking up on the Doris Day version played on a juke box within the exhibition. It is perhaps too soon to fully assess the legacy of Hamilton’s art and ideas; but one wonders whether he will emulate his literary hero Joyce, who famously remarked: ‘I’ve put in so many enigmas and puzzles that it will keep the professors busy for centuries arguing over what I meant, and that’s the only way of ensuring one’s immortality.’

Could be. And then again.