Elegant and minimal in form yet charged with menace, Micol Assaël’s installations articulate the fear of violence and the terrible potency of technology 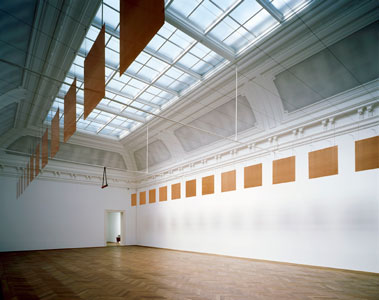 At the entrance to Micol Assaël’s recent installation Chizhevsky Lessons (2007) at Kunsthalle Basel, a disclaimer poster gave a basic explanation of the workings of the main, eponymously titled installation. Consisting of a customized power generator, wiring and copper panels, the piece effectively turned the gallery into a giant electrical condenser, giving each visitor a weak electric charge. When you touched another person or object in the room, a discharge occurred. An effect equal to the common mild electrostatic shocks that you might experience walking on synthetic carpet was here intensified to an institutional and performative level, affecting the entire body and live-wiring social behaviour.

The disclaimer detailed ‘at-risk groups’ who should not attend: pregnant women, people with electronic implants or heart conditions, children under ten. Although this type of signage is now as common on art works as it is on roller-coasters, it was on reading the ‘rules of conduct’ section that you started to feel nervous. ‘By no means touch the face of another visitor (especially the eyes).’ Why, you might wonder, would you want to touch someone’s eyes? And what would happen if you did? More to the point, the instruction not to touch another visitor’s eyes had the vertiginous effect of making you terrified that you just might.

Breaking the rules of conduct, I assume you could bestow, or receive, an electric shock to the eyeball, causing blindness. In a cultural context prioritizing the visual, Assaël seemed to be establishing the conditions for a potentially malevolent and illegal violent action. The work literally circulated potent physical energy – the electric force field – but as this energy was almost entirely invisible Chizhevsky Lessons ramped up the psychological tension with all the disruptive power of a non-specific threat. As a riposte to cosy notions of socially engaged art or relational aesthetics, being close to people here meant getting electrocuted.

In contrast to its minatory atmosphere, Assaël’s installation was visually elegant and composed. Copper panels suspended from the ceiling on steel wires formed a minimal arrangement running the length of the gallery. Walking into the room, possibly admiring the tasteful restraint of the display or its relationship to Kunsthalle Basel’s classical exhibition hall, you immediately felt the electrostatic charge of the piece – and with some force. It seemed to crinkle you up around the edges, literally electrifying you, resulting in a curious sensation of space/time dislocation at odds with the surroundings. The spectator was not just surrounded by the art work but, owing to the laws of physics, their body actively contained it – leaving the mind free to think about lightning fields, the phenomenology of the sublime or blistering eyeballs.

In an adjacent room, a video playing on an old-fashioned monitor documented Assaël’s meetings with the engineers from the V.I. Lenin All-Russian Electrotechnical Institute in Moscow who collaborated with her to devise the mechanics of the piece. A group of men – silver-haired, twinkly-eyed, several wearing suits and ties – tested various transformers, voltmeters, generators and electromagnetic chargers. They teased and bantered with Assaël like amiable grandfathers while creating a host of sparks and explosions. Their attitude and actions seemed eccentric but belied a learned precision – the power of Chizhevsky Lessons deriving not just from the physical electricity of the piece but also from the orbiting magnetic fields of Assaël and her team of engineers.

The workshop laboratories of these engineers appeared stuck somewhere mid-20th century: lumbering machines, endless cables and control panels with outsized levers, all looking curiously dated. An analogue world, once as real and powerful as the Cold War, had here become a place in which to create science fiction, which – for all its stripping down of sculpture to the most basic realities of physical matter – is what Chizhevsky Lessons, and much of Assaël’s work, really is. Cause and effect, science and art, the rational and irrational, and the limits of the rule of law.

The Russian engineers’ workshop–laboratories look like an Assaël fabrication studio, containing material for any number of her previous projects and all showing an equal fascination with immaterial danger and elemental force. Assaël’s works have the aura not so much of technology – a term today more in tune with aspirational narratives of clean and efficient synthetic production ever-ready for a digital future – as of machinery: grubby and capable of violent brute force, the heavy materiality of motors, engines, oil and steel creating a potent aesthetic.

Mindfall (presented at Manifesta 5 in 2004) could be seen as a direct precursor to Chizhevsky Lessons. The science was less refined and the staging more formally ambivalent, but the effect was oddly sensuous and no less charged. A disused office in a former factory contained engines and condensers set out on tables, switching on and off. The room stank of petrol and smoke, the walls were stained and one window was entirely fogged. Atmospheric pressure was both a real, physical fact – aural and olfactory effects created by the complex wiring of the motors, and the electrical resistor installed between double panes of glass to fog the window continuously – and the result of a formally emotive staging.

Mindfall was sharply tuned to its run-down industrial surroundings. Trailing around a biennial-type exhibition such as Manifesta, hyper-sensitized to showy conventions of display, the work resonated with something darker and more malignant; like a booby-trapped workshop, or eerily empty factory hastily vacated by workers in fear of their lives. Here Assaël’s theatrical skills were given the opportunity to play lightly but to dramatic effect. With Sleeplessness (2003), presented at the Moscow Biennial 2005, Assaël created a situation quite similar to Mindfall in its staging, playing off the tension created by the place in which the work was encountered. Here, in a shabby and apparently discarded exhibition space, Assaël used a heady mix of refrigeration panels, extreme hot and cold temperatures, and a view from the window onto intensely entropic January snowstorms. As with many of her works, figuring out the logistics of the science behind each piece is the least interesting aspect; rather, it is the use of material, the various dramatic registers and the distilled character of each work’s location that intrigues.

Waiting for the Unknown (2005–ongoing) – an as yet unrealized project – sets out to test formats and scenarios for creating and viewing an art work on an epic scale. The work proposes storing one tonne of TNT in the currently dormant Icelandic volcano, Eldfell. When the volcano wakes up, it is assumed that the TNT would embellish the eruption to an excessive degree. Waiting for the Unknown is currently represented by a series of found photographic images of explosions both volcanic and nuclear, an image of Assaël bounding down a volcanic-looking slope and one rather more baffling collage of what looks like the artist’s face inserted into an article on the effects of nuclear explosions and bearing the caption ‘Lazzarina Vlinanov (Mordechai’s mother)’. Mordechai Vanunu, the Israeli technician imprisoned in Israel for revealing details of his country’s nuclear programme to Britain, is a key figure for anti-nuclear campaigners. Here he becomes a symbolic emblem within Assaël’s narrative, a muddled intervention that rather grandly adapts Vanunu’s history to Assaël’s own.

Waiting for the Unknown plays with enduringly powerful notions of myth and causality: that of the singular artistic gesture, for example, or of global apocalypse. These allusions resonate throughout Assaël’s work. The series of drawings ‘Freefall in the Vortex of Time’ (2005–ongoing), reconstructs
Assaël’s life as narrative myth. A limited edition book of the drawings, which was published in 2005, consists of spiralling pyramids of numbers inscribed on found documents – tickets, postcards, receipts – made by Assaël while travelling to and from Russia. The drawings collide the banality of everyday detritus and the boredom of waiting with allusions to complex mathematical codes, occult symbolism and paranoid conspiracy theory. Here the charge is generated by Assaël’s personal memories, evident pent-up energy and idiosyncratically grandiose ordering system. Chizhevsky Lessons is a homage to the Russian scientist Alexander Chizhevsky – a pioneer in space biology whose research focused on the correlation between solar activity and significant historical events such as wars and revolutions. The Brightness of the Morning After, staged at the 2005 Venice Biennale, involved a figure, directed by Assaël, standing in the rafters of an exhibition hall reading extracts, to spooky effect, from books about the end of the world.

In Europe this past summer the atmospheric pressure has been extremely intense. Torrential rain caused major flooding in northern Europe, and forest fires ran wild across the south. In June two cars were found primed for detonation outside night-clubs in central London. The same month two men drove a jeep packed with explosives into the doors of Glasgow Airport, causing a massive fireball but minimal human harm (a drop in the ocean in comparison with daily life in Baghdad.) In August, at the time of writing, Russia has planted a flag at the bottom of the Arctic Ocean, kick-starting a rush for deep-sea oil and gas. The monsoon in India has displaced 14 million people, and another outbreak of foot and mouth disease in livestock has been announced in England. Global stock markets are in flux. All these strains of violence – natural, territorial, political, biological, economic – are terrors too uncontainable and irrational to be reduced to a narrative of global cause and effect. A simple, sociological definition of violence is an unlawful use of force. Violence’s most brutal energy, found both in nature and in actions that transgress the limit of social law, often derives from an element of surprise – this is part of its effect. Conversely, violence is at its most cruel when it is measured and premeditated and most terrifying when the threat is non-specific. There is an insidious, invisible circulation of violence which daily becomes more banal but no less effective – a powerful circulation of irrational and rational ideas which amplify our fears: frequent reports of impending eco-apocalypse, for instance, or the abstract threat of ‘terror’ as used by governmental counter-terrorism agencies.

Assaël’s work points to the often combative forces that determine our environment or underlie social relations. She plays with the logic and rules of science to make work that proposes the transgression of those rules. She invokes strangely old-fashioned art-historical conventions in her minimal arrangements, referencing a tradition of older artists preoccupied with materials, the body, conceptual cuts and entropic action – obviously Gordon Matta-Clark or Robert Smithson, but also the absurdist humour of Bruce Nauman or the futurist bravado of Umberto Boccioni. Yet there is something entirely contemporary in the way her catastrophic Minimalism articulates the terrible potency of technology, creating situations that prioritize power and stage risk, resistance and limit as a state of being. Assaël uses formal systems – how things build themselves up or break down, start and stop, the bluntness of binaries, the endless push-and-pull of attraction and repulsion – to create something unasked for by the viewer, something malevolent and ominous. The low hum of a domestic appliance suddenly contains all the menace of global threat: a hyper-real, entropically charged science fiction. They say you get what you deserve. Assaël makes art for our time.

Polly Staple is a curator based in London and editor at large of frieze.