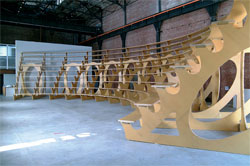 Well known in both Europe and the USA for work that smartly blends tropes from Minimalist sculpture, industrial design and Modernist architecture, Rita McBride’s recent exhibition offered an opportunity to take stock of over a decade’s worth of production. The centrepiece of the show, Arena (1997), impressively occupied the Sculpture Center’s industrially scaled main gallery while a side-space provided documentation, models and a computer-generated video for two whimsical site-specific projects in Vienna and Munich. Additionally, a number of McBride’s sculptures were situated around a courtyard – literally left out in the cold, where they huddled and hugged the walls like neglected step children.
The show’s focus was clearly Arena, which, in the manner of works by Jorge Pardo, is both a sculpture and a functional structure. Constructed in wood and polymer fibre, Arena is a full-scale set of stylized bleachers that can be dismantled and reconstructed for easy transport. A site that tours like a rock band – it was exhibited in Taipei, Rotterdam, Stockholm and Liechtenstein before arriving in New York – Arena is an architectural object designed for the spectators of events transformed into an event itself.
Venturing into what is by now the well-trodden territory of relational aesthetics, McBride used the arcing, semicircular seating as a site for actual events during the run of the exhibition, organizing a programme of performances, readings and lectures by other artists and writers. But I preferred to view Arena as a sculpture that reverses the dialectic of spectator and spectacle, a vaguely countercultural act of defiance that suggests in Beuysian terms that we are all artists worthy of being watched. Indeed, watching bemused gallery-goers gaze up at the steeply pitched stadium seating seemed much more interesting than sitting in it and enduring yet another artist engaging the audience in some convivial, do-good lesson. By virtue of its implacable nature Arena becomes a post-Situationist proposition offering no distractions, no leisurely activities, no rewards, other than the sense that a moment of stillness in the midst of a built-but-vacant environment (like Monica Vitti standing in the empty piazza in Michelangelo Antonioni’s L’Eclisse, 1962) can be its own reward.
Favouring forms and materials whose use-value is evident but withheld or detoured has become a hallmark of McBride’s practice. In this sense there’s a Surrealist aspect to her work, particularly in the way André Breton and his crew gravitated towards objects and places just slightly past their expiration date: the dross that capitalism leaves in its wake. McBride also critiques the system of planned obsolescence in her Machines (2001), painted steel sculptures whose forms are based on free-standing video game consoles, while her other works – custom-built ready-mades in the guise of awnings and air-conditioning ducts, wooden decks and skylights – embrace their refugee status. Dislocated and adrift, these are objects whose half-hearted masquerade as architectural elements lends them a rueful sadness. They are homeless but not unheimlich – there’s nothing uncanny about them. Rather than emerging into the light, these sculptures all have an obdurate, impenetrable, impotent quality: opaque skylights, powerless conduits, disconnected heating ducts gaping mournfully at either end. The aptly named White Elephant (Modified) (2004) stands hunkering, inelegantly brute-like and sexless, recalling McBride’s bronze casts of hunchbacks from the mid-1990s. Deaf and dumb, it turns inwards and confounds our desire to come to terms with it on existential terms; in other words, to understand why it exists at all.
All of this speaks pointedly to a fundamental aspect of McBride’s work. The continual push-and-pull between architecture and art, between the closed-off qualities of her objects and the open lattices that characterize her large-scale installations, is part of a complex system by which political and cultural power structures are interrogated and challenged. Recalling Derrida’s discussion of ‘spacey’ architecture, McBride’s cast bronze models of parking garages, her rattan Toyota (1990) and the newly proposed ‘monument’ for a Munich roundabout, Mae West (2004), all use the lattice in a provocative display of an architectural bravado that disavows both utility and the authoritarian underpinnings of most urban structures. Instead they favour a fluid and penetrable notion of public space. Combined with a willingness to take on real authority in order to realize these projects – her participation as a member of the Skidmore, Owings and Merrill team for the World Trade Center reconstruction competition being indicative – McBride’s practice can be seen as a model for activist artists operating in the social realm.